Fossil fuel divestment: How wide a net to cast?

Fossil fuel divestment: How wide a net to cast?

Institutional investors have several paths to reduce exposure to carbon risk in their portfolios — the risk of being exposed to assets that may lose their value prematurely because of efforts to limit climate change.

Some institutional investors have committed funds to a low carbon approach (using tilts and optimization to limit short-term benchmark risk) or by engaging with carbon-exposed companies. Others are increasingly being urged, and even required by regulations, to explicitly divest from fossil fuel holdings.

Institutions going the divestment route face an increasing number of ways to design their programs. Some questions that institutional investors commonly consider when constructing divestment policies and mandates include:

In practice, there is considerable variation in how wide institutions cast the net. The narrowest approaches, such as those applied by the California Public Employees’ Retirement System and the California State Teachers’ Retirement System, focus on thermal coal (coal that is burned for heat or energy) and set a high threshold (e.g., ≥50% of revenue or power generation) for divestment. In contrast, the City of Copenhagen, takes a broad approach across the value chain and across fuels with a low threshold (e.g., ≥5%) for exclusion.

Depending on the approach, the potential impact on the portfolio can vary substantially. For example, reserves-based divestment could have eliminated anywhere from 1.7% of securities by weight (thermal coal only) to 7.7% (all fossil fuel reserves owners) for a portfolio replicating the MSCI ACWI Index. 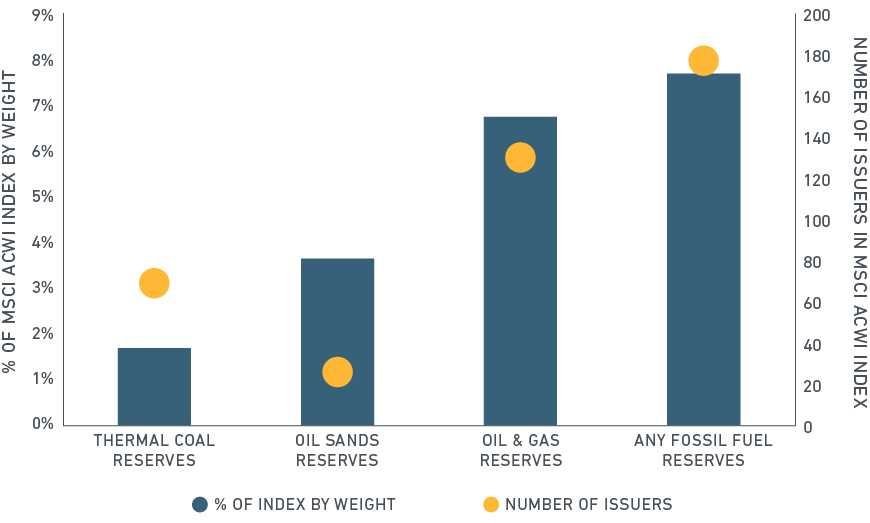 In comparison, a revenue-and-generation approach could have eliminated from as little as 0.8% by weight (thermal coal only, at a 50% threshold) to 10.1% (thermal coal at 30% plus oil and gas at 50%), also based on April 15, 2016 data. Lower thresholds would have increased the size of the exclusion. In general, institutional investors would have seen greater reductions in their portfolio carbon footprints through a revenue-and-generation approach (which affects utilities) than a reserves-only approach.

Risk and return were not impaired by divestment during the past five years. For November 2010 through May 2016, the MSCI ACWI ex Coal Index (which excludes companies that own coal reserves) and MSCI ACWI ex Fossil Fuels Index (which excludes companies that own oil, gas or coal reserves) showed somewhat better return, risk and Sharpe ratios than for the parent index. Performance, of course, may vary over different time periods.

How wide a net do institutional investors want to cast when considering fossil fuel divestment?  There is no simple answer. Those not facing specific regulatory requirements must weigh short- and long-term financial considerations along with their appetite for risk and the demands of their stakeholders. In short, it’s a balancing act.

The author thanks Meggin Thwing Eastman for her contributions to this article.