Is it time to change your number?

Is it time to change your number?

Investors have long sought equity indexes to measure exposure to the U.S. market and size segments such as large-, mid- and small-capitalization stocks. These indexes undergo periodic rebalancing in order to reflect changing market dynamics.  However, do equity indexes that use a fixed number of stocks provide objective measures of market size?

Indexes that are “number-locked” — i.e., those that use a fixed number of constituents — may not consistently and accurately represent market segments. Their size characteristics may shift over time. In addition, selection of constituents in number-locked indexes tends to be part of a subjective decision-making process. Using an objective, rules-based approach that does not fix the number of constituents, such as the one used by the MSCI USA Indexes, offers an alternative option.

MSCI USA IMI and its sub-indexes

Why is it important for investors to avoid using a fixed number of stocks? To answer this question, we looked at the year-end market cap coverage from December 2007 to December 2016. At its lowest point, in December 2010, the large- and mid-cap MSCI USA Index comprised 84.7% of the total U.S. equity market. At its highest point, in December 2008, the index captured 87.4% of the total market— a fairly narrow spread from the average of 86.1% for the entire time period.

Similarly, the MSCI USA Small Cap Index on average covered 13.9% of the U.S. stock market during the 10-year span. The stability and robustness of the MSCI USA Indexes were possible because the number of stocks included within each sub-index was flexible and not predetermined. 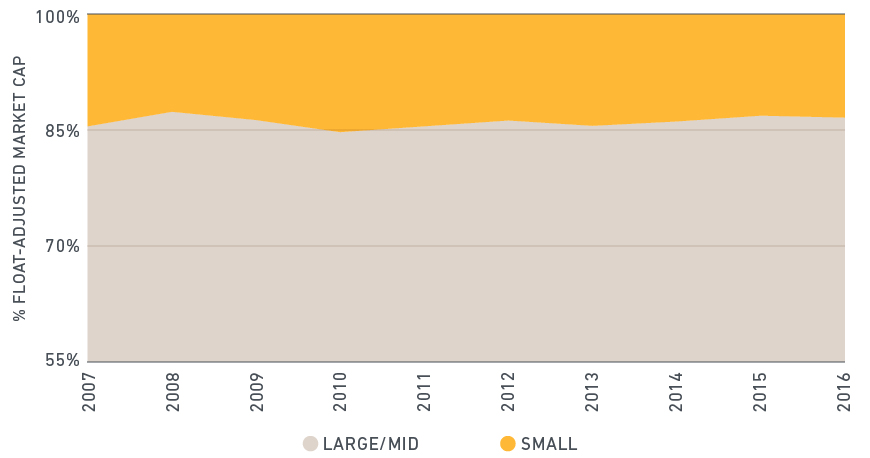 Comparing MSCI’s balanced approach for defining size segments to an approach that uses a fixed number of stocks (the largest 500 and 1,000 stocks), we see that the market-cap coverage from the latter approach was not stable and led to uncertainty as to what was measured by these indexes. 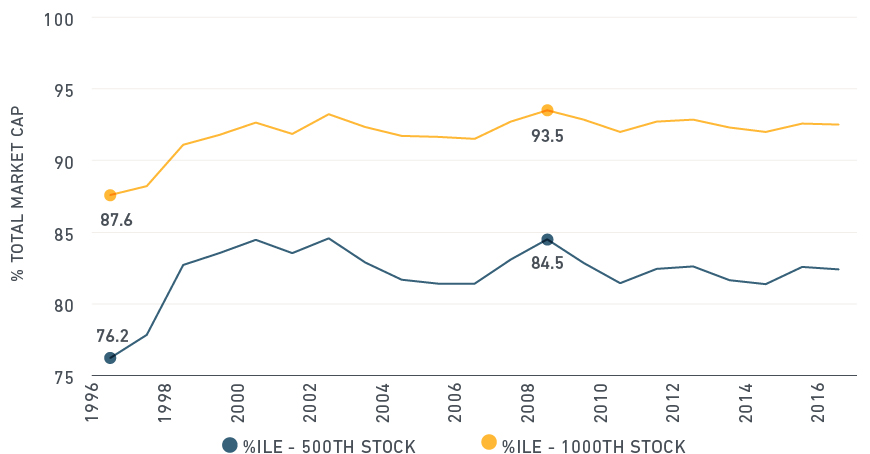 The small-cap segment would have been represented by those stocks remaining after the top 1,000 were removed. This approach would have resulted in a small-cap index that varied in size from 12.4% of the U.S. market in 1996 to 6.5% of the market in 2008.

For investors to gain a correct measure of the market, it is critical for U.S. equity market indexes to consistently and accurately reflect the differences among large-, mid- and small-cap segments. Market participants may choose to over- or under- weight certain size segments, but in order to do so, they need objective and durable market indexes that do not shift in market cap coverage over time.

1 The MSCI USA Index can be divided further into the MSCI USA Large Cap and MSCI USA Mid Cap Index which represent approximately 70% and 15% respectively, of the float-adjusted U.S. market cap