Out of Whack: US CEO Pay and Long-Term Investment Returns

Out of Whack: US CEO Pay and Long-Term Investment Returns

Last year, we asked whether pay awards to U.S. chief executive officers reflected long-term shareholder returns, and found they did not. The bottom fifth of companies by equity incentive award outperformed the top fifth by nearly 39% on average on a 10-year cumulative basis.

That study looked at awarded pay — of which 60%-70% reflected incentive stock awards. Awarded pay figures, which are based on the value of the company’s stock at grant date, lay out the range of potential CEO earnings, and are intended to align CEO and shareholder interests. We now extend that study to examine realized pay – how much compensation CEOs actually took home after exercising their equity grants.

But realized pay was just as poorly aligned with long-term performance as awarded pay. More than 61% of the companies we studied exhibited poor alignment relative to their peers. We found little correlation overall between realized pay and long-term investment returns, as indicated by the very low R-squared value of 0.0093 shown in the exhibit below.1

Realized CEO pay was not aligned with long-term shareholder returns 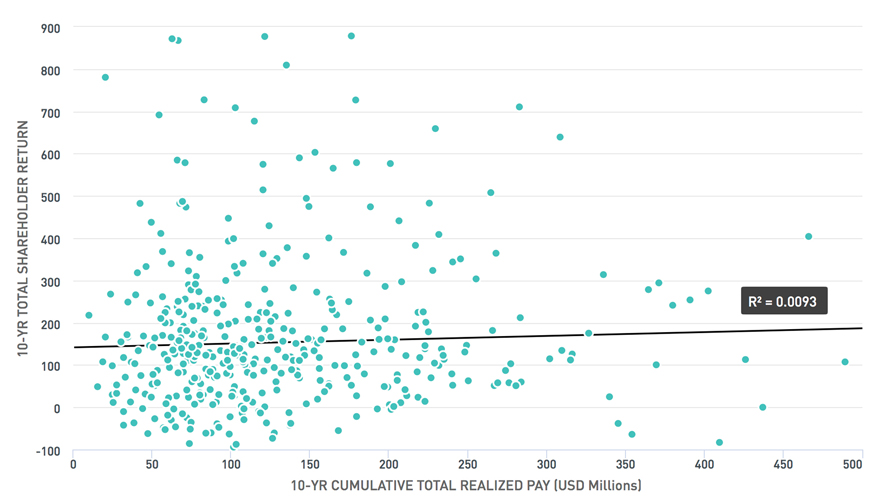 1 The R-squared value (R2) indicates what percentage of the variance is explained by the model. A very low figure indicates that the model provides little explanation.