With average purchases of €7.8 billion ($8.7 billion) per month, the European Central Bank’s corporate bond buying program (CSPP) has become a major driver in the market.  But will the program deliver on a core goal of funneling new lending to the private sector?  If not, ECB support for the program could weaken and the program could be scaled back or terminated.

The program has had a pronounced impact on corporate bond issuance, with borrowings spiking to their highest levels in several years.  Note that our measure of issuance is net of refinancing of existing corporate debt and as a result is a better measure of new lending than gross issuance.

This surge in issuance has been driven by much lower costs of borrowing.  Spreads on CSPP eligible bonds narrowed sharply in the days following its announcement and are now 37 bps tighter than at the beginning of the year. 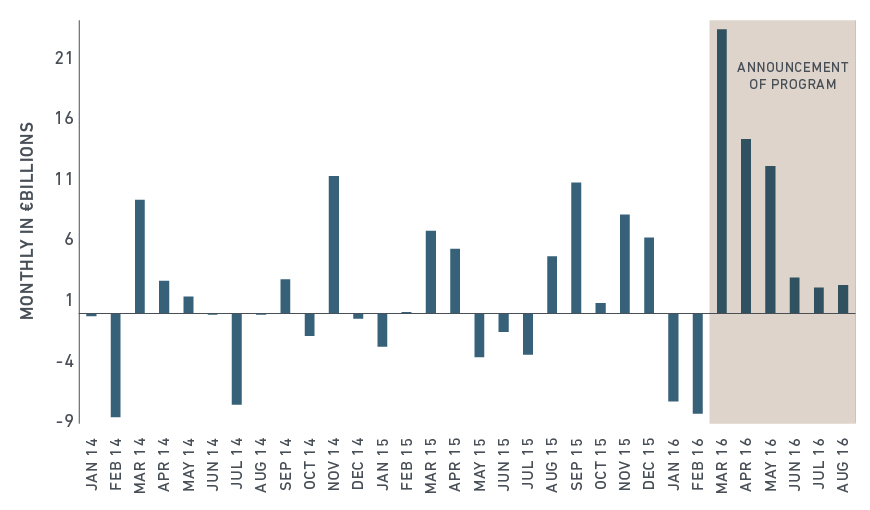 Assessing risk in the ECB's portfolio

Let’s now turn to the ECB’s ability to manage the portfolio according to its own investment guidelines.  Unexpected credit losses or signs of favoritism in corporate bond selection could undermine political support for the program, which could put pressure on European corporate bonds.

The table below shows our projection of risk in the CSPP portfolio according to MSCI’s factor model.  Credit risk is very modest – with spreads contributing only 3% of portfolio risk and issuer selection contributing 1%. Nearly all of the risk (96%) results from potential movements in the government yield curve. Note that the CSPP’s interest rate risk is significant, but no more so than buying sovereign bonds in the middle (five to seven years) section of the curve.  The CSPP’s portfolio had a projected (annualized) return volatility of 230 bps as of September 19.

CSPP purchases have also closely tracked the published guidelines for its internal benchmark. Our model projects active risk of the CSPP portfolio versus its benchmark of only 10 bps, with issuer selection risk contributing 5 bps. The results show scant evidence that favoritism has influenced bond purchases to date.

*The ECB publicly discloses only the identifiers of the securities that it purchases, not the amounts. Nor does it publish the list of bonds eligible for its internal index. Our analysis is based on what we feel are reasonable assumptions but will not correspond precisely to the ECB’s actual portfolio and index.

At its current purchase rate, the CSPP will have accumulated approximately €76 billion ($85 billion) in bonds by the end of March 2017, the date the ECB’s quantitative easing programs are currently scheduled to end. By then, we estimate that the ECB will own about 11% of eligible bonds, a substantial portion of the eurozone corporate debt market.

So far, so good. But as its market share grows, the ECB risks criticism that it is distorting prices and favoring CSPP-eligible issuers. The central bank may seek to continue quantitative easing beyond March 2017 while changing tactics. Possible changes could include opening the CSPP to banks as well as extending the program to include bank loans, which will spread a wider net while seeking to keep the ECB’s share of European corporate debt to a reasonable level.

The author thanks Hamed Faquiryan, Aniko Maraz and Vlad Razuvanov for their assistance in preparing this note.