The decision by a majority of U.K. voters to leave the European Union shines a light on fissures between perceived winners and losers from globalized markets and highlights for investors the importance of factoring the consequences of inequality and popular discontent into their views.

Few in the financial establishment believed Brexit would be approved. Now, investors are pondering what the rise of populism may mean for portfolios over the long term.

With that in mind, our latest quarterly report examines the potential impacts on institutional portfolios of a tide of populist sentiment across Europe and the U.S. Its expressions come from both ends of the political spectrum but have in common three things: assertions of sovereignty, calls for a buildup of barriers to the movement of goods and people (isolationism), and increases in deficit spending.

We also review a scenario that we first evaluated in March, in which Brexit ignites a wave of populism across Europe that leads to a breakup of the eurozone. The scenario remains a concern in the light of political and economic risks that continue to unfold.

In our view, analysis of forward-looking scenarios can help investors manage extreme events and, if appropriate, adjust their strategies accordingly. While some scenarios might never materialize, others, such as Brexit, do.

As detailed in the report, adoption of populist policies throughout the U.S. and Europe may lower global growth by 3% a year and cause even a globally diversified multi-asset class portfolio to lose between 8% and 11% of its value as those policies take effect.

The macroeconomic environment in the last five years has been one of low rates with little inflation. The second of two scenarios that we’ve modeled provides grounding for why inflation may rise and lead to stagflation, which few investors have prepared for. 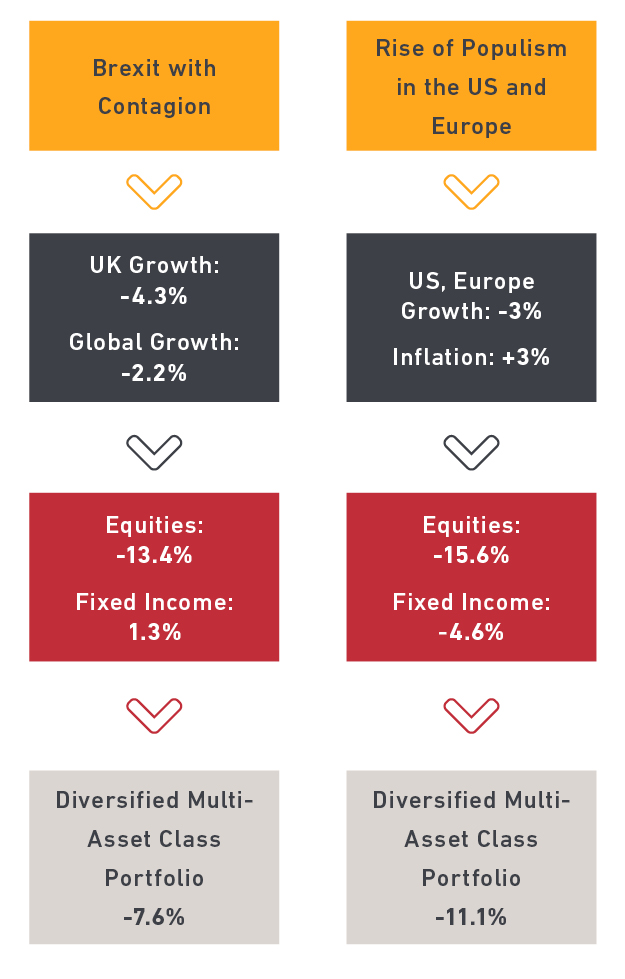 In the scenarios that we evaluate, populism could produce losses to equity and debt markets overall, with countries at the periphery of Europe at risk of the largest declines. Growth-sensitive equity strategies such as value and small cap, as well as cyclical sectors such as financials, could experience losses relative to the market.

Some strategies may benefit in one type of scenario but could suffer in a different one. For example, in a Brexit with contagion, a risk-parity portfolio could help limit losses, as its enhanced tilt to sovereign bonds helps hedge adverse shocks to growth. But risk parity offers little hedge against a rise in inflation of the magnitude that the second of the two scenarios that we model envisions.

The Rise of Populism, Impact on Portfolio Returns and Allocations

brexit populism
Previous Next
Back to Blog Home