When stress tests become reality: which scenario after Brexit?

When stress tests become reality: which scenario after Brexit?

In recent years, we have emphasized repeatedly that investors need to have a forward-looking view of risk, to anticipate and model extreme events, and, if appropriate, act to ensure their ability to withstand them. Some scenarios never materialize while others, including the U.K. deciding to leave the European Union, do.

Brexit may be only the beginning. After the shock wave passes, investors will turn to assessing the likelihood of transmission to the rest of Europe and other western developed countries, where unevenness in the benefits of globalization is intensifying populist pressures from the political right and left.

That’s unlikely to go away, which means that investors should prepare for additional shocks to financial markets that populism entails. A look at the winners and losers in globalization suggests why.

Why populist pressure isn’t going away 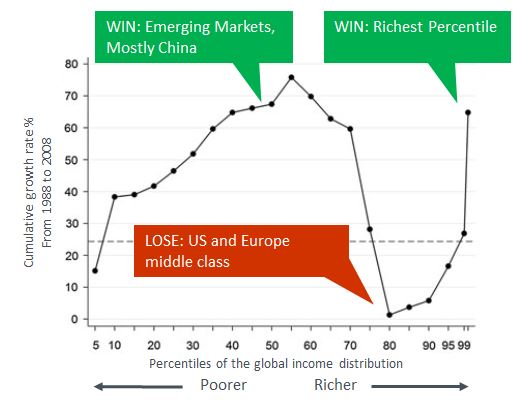 Many of the same forces that brought about Brexit are sparking discontent among voters elsewhere, as evidenced by elections in Poland and Austria and the rise of France’s far-right National Front, who calls for unraveling the EU and says that globalization has brought more pain than happiness. Similar arguments have been raised during the primary campaign in the United States.

Electoral calendars may put the focus on one particular country at one point in time but the pressure is present throughout developed economies.

The following exhibit ranks the results of populist parties in Europe since the last European parliamentary elections, complemented by recent general election results for Austria, Spain and Switzerland (lighter color in exhibit). This picture alone points to potential concerns across most European countries with maybe the notable exception of Germany.

Few European countries immune to the rise in populism

Stress testing the effects of populism presents several challenges, including the number of assumptions required. Using MSCI’s framework, we suggest a process that includes the following:

1. Review the fundamental reasons for the rise in populism and the countries that may be affected the most

2. Analyze the typical patterns of populist economic policies both from historical precedents and current proposals, including the economic situation in each country and the policies proposed to address it

3. Select countries likely to be impacted, and shock their economic growth and inflation rates accordingly

4. Measure the impact of these shocks on core market variables using a macro-based asset pricing model

5. Propagate, via an analytics system for stress testing, the shocks to portfolios across varied asset types

We have assembled MSCI’s experts in modeling macroeconomic situations, assessing environmental, social and governance (ESG) risk, and stress testing to go through this process ourselves. We’ll describe the drivers and reveal the potential impact on institutional portfolios for varying outcomes of populism in a report that we expect to publish in early July.  Having looked at initial results, I hope this time the scenario will fail to materialize.

How the Brexit vote may impact your portfolio

How Brexit may impact your portfolio

brexit
Previous Next
Back to Blog Home