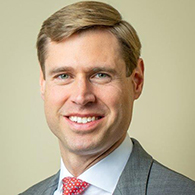 Andy Wiechmann, as Chief Strategy Officer, is responsible for driving MSCI’s growth strategy and planning process, overseeing M&A and partnership activities, and supporting the business on its most important strategic growth initiatives. He is also as a member of MSCI’s Executive Committee.

He has served as Head of Strategy and Corporate Development since July 2012, as Head of Investor Relations from December 2017 to March 2019 and Head of Financial Planning & Analysis from July 2015 to December 2017. Andy has also played an integral role in managing the firm’s capital structure, including helping to establish the leverage and dividend policies and overseeing the share repurchase and financing activities.

While Andy formally joined MSCI in 2012, he has been a member of the MSCI family since 2006; beginning with his work on various potential acquisitions as well as MSCI’s IPO while an investment banker at Morgan Stanley. Over the years, he has been a key member of our finance organization, performing numerous responsibilities and providing significant contributions to our ongoing transformation. Andy is also now a member of the Executive Committee.

Prior to joining MSCI in 2012, Mr. Wiechmann was an investment banker at Morgan Stanley where he executed M&A and capital markets transactions for financial technology and specialty finance companies.