Through time, many investors have shown a preference for their home markets. The magnitude of that home bias, however, has not been consistent across countries or regions and has declined globally through time. Data from the Thinking Ahead Institute1 shows that pension schemes have steadily reduced their home bias in equities, as the weight of domestic equities has fallen, on average, from 67% in 2000 to 38.5% in 2020. We have also observed that trend in our research.

If we plot the returns of a 100% home-biased portfolio (returns of a country index relative to the global market excluding that country), we see that, from the 1970s to the 1990s, a home bias would have helped U.K. and Japanese investors. In contrast, a home-biased U-S. investor would have missed out.

Over the last two decades, the outcome has reversed. A U.S. home bias would have delivered significant outperformance, albeit with a cyclical nature and struggles at certain points. During this period, stock ownership as a percentage of total financial assets of U.S. households increased from 31% in Q2 2001 to 42% in Q2 2021.2

Since the 2008 global financial crisis, U.S. equities have performed twice as well as international equities. This decade-plus-long run has been supported in part by the Federal Reserve’s quantitative easing programs which have led to substantial asset purchases by the Fed, including equities. However, the Fed has said it will revisit this program in coming months. 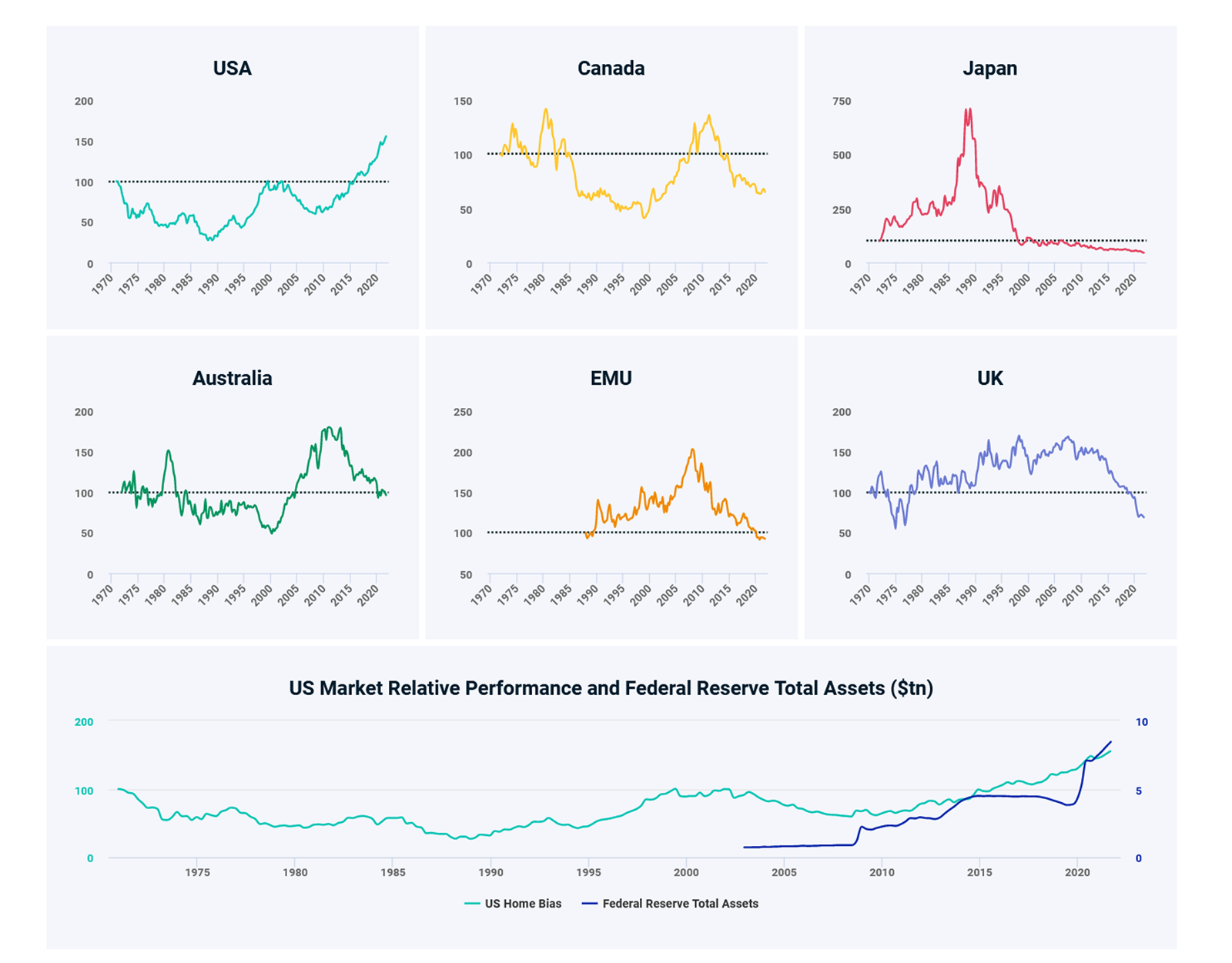 Game of Homes: Is Winter Coming for the Domestic-Equity Bias?

U.S. wealth advisers’ allocation models have a considerable overweight to U.S. equities when compared to a capitalization-weighted benchmark.

The U.S. equity market ended last year with a historic drawdown, as we noted in our blog post “Beaten-down beta.”

2 US Federal Reserve. Sum of “directly held stock” and “Indirectly held stock” divided by “financial assets” for “Households and Nonprofit Organizations.” See “Financial Accounts of the United States: Balance Sheet of Households and Nonprofit Organizations, 1952-2021.” Board of Governors of the Federal Reserve System, Sept. 23, 2021 https://www.federalreserve.gov/releases/z1/dataviz/z1/balance_sheet/chart/