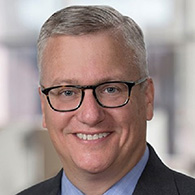 Rob Gutowski is the General Counsel of MSCI. He leads the company’s Legal and Compliance department and oversees the Government and Regulatory Affairs as well as Internal Audit functions. He reports to Chairman and Chief Executive Officer Henry Fernandez and is an Executive Officer of the firm and a member of MSCI’s Executive Committee.

Rob joined MSCI in 2002 and has previously held the positions of Deputy General Counsel, Head of Compliance and Head of Internal Audit. Prior to joining MSCI, he was a corporate lawyer at Rogers & Wells and Clifford Chance LLP.

Rob holds a Bachelor of Arts degree from Georgetown University and a J.D. from the State University of New York at Buffalo Law School.