Has CEO pay reflected long-term stock performance? In a word, “no.”

Companies that awarded their Chief Executive Officer (CEOs) higher equity incentives had below-median returns based on a sample of 429 large-cap U.S. companies from 2005 to 2015. On a 10-year cumulative basis, total shareholder returns of those companies whose total summary pay (the level that must be disclosed in the summary tables of proxy statements) was below their sector median outperformed those companies where pay exceeded the sector median by as much as 39% (see exhibit).1

Companies with CEOs paid above median underperformed those paid below-median 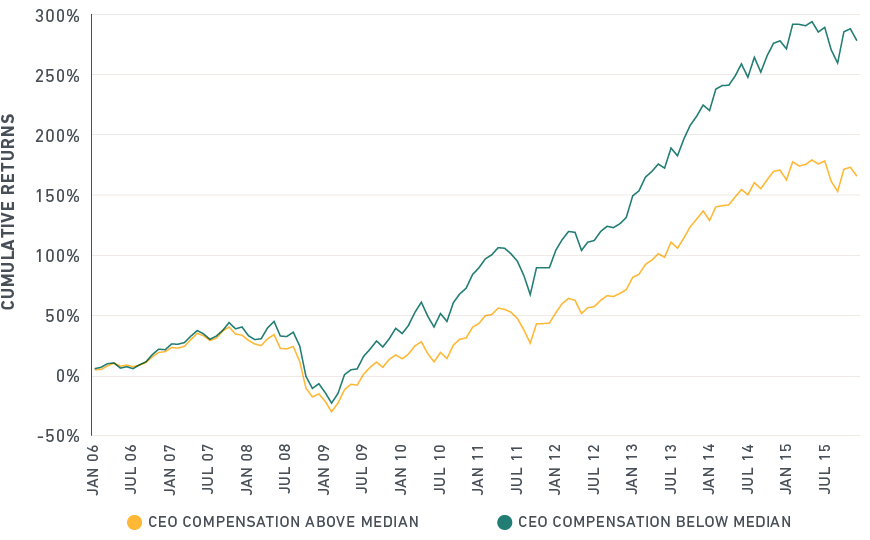 10-year Total Shareholder Return Time Series, based on above and below peer summary pay medians / returns shown are equal-weighted.

For long-term institutional investors, this potential misalignment of interests between CEOs and shareholders may undermine the adoption of equity-based incentive pay that has dominated executive pay practices in the U.S. for the past three decades. During the observed period, long-term incentive pay was the largest element of CEO pay, accounting for more than 70% of compensation for both summary pay and realized pay (which incorporates stocks gains realized during the course of the year), according to our calculations.

A large part of the issue is that disclosure rules mandated by the U.S. Securities and Exchange Commission focus on annual instead of long-term reporting. Inclusion of certain long-term data, such as a comparison of total summary incentive pay over the CEO’s entire tenure to company stock performance, could help better align the interests of CEOs and long-term investors. In addition, improved disclosure of one-time benefits such as signing bonuses and severance agreements in cumulative totals would likely increase the focus on these often significant pay provisions.

In general, companies very rarely include the sort of figures in presentations of CEO pay that long-term investors would find most helpful. We derived such long-term measures from multiple filings but believe the general lack of such integrated disclosure results in an excessive focus on short-term share price gains, at the expense of long-term returns.

Long-term institutional investors typically bear the cost of this misalignment, yet they have routinely approved CEO pay packages. Closer scrutiny of the relationship between CEO pay and performance over longer time periods could lead to different conclusions.

1 While we have not yet completed a full statistical evaluation of this relationship, we believe that the findings are sufficiently compelling to serve as a basis for further review and discussion regarding this widely debated aspect of corporate governance.

Are CEOs Paid for Performance? Evaluating the Effectiveness of Equity Incentives