Are Market Valuations in Nosebleed Territory?

Are Market Valuations in Nosebleed Territory?

Markets have enjoyed a relatively long period of positive returns and low volatility, making some investors wonder if a correction is imminent. One possible trigger for a correction would be investors concluding that market valuations have become extreme, which could lower future returns. In this short note, we examine current valuations of U.S. equity and fixed-income markets and compare them with historical levels over the past 40 years. We find that valuations across both asset classes are high relative to historical levels. However, the degree of relative overvaluation is lower than during previous extreme market conditions.

We start by examining key valuation ratios for the MSCI USA Index1 over the period December 1969 to July 2017. We calculate index valuations by dividing the total market cap of all index constituents by the total earnings, cash earnings, book value and sales of all index constituents. The three horizontal lines plot the in-sample mean and one standard deviation bands above and below the mean for each valuation ratio. 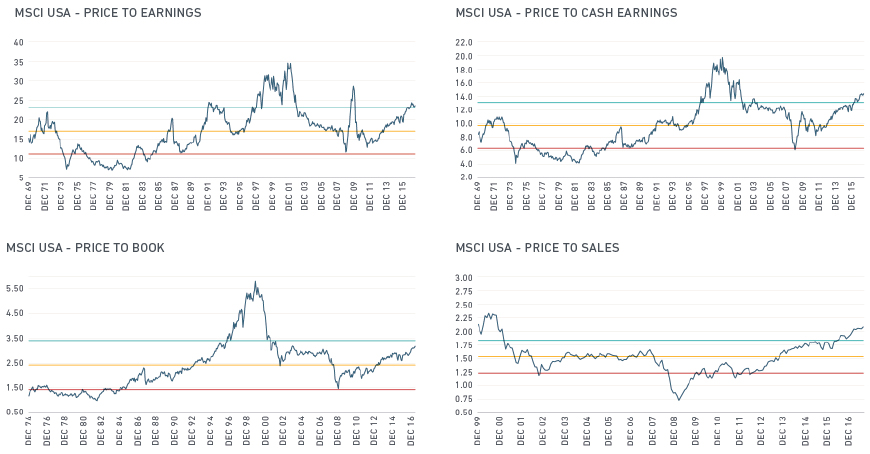 U.S. equity valuations as of August 2017 are approximately one standard deviation above historical averages and have been rising since the global financial crisis in 2008-2009. The level of valuation above the mean is higher than at any period in the past 40 years except during the late-1990s technology bubble, when some ratios reached three standard deviations. Price to sales showed the highest relative overvaluation, followed by price to cash earnings, price to earnings and price to book value. As the exhibit below shows, security-level median valuations across large, mid- and small-cap stocks listed in the U.S. equity market2 are consistent with the index-level analysis and confirm that high valuations are not confined to large- and mid-cap index constituents. Earnings and book multiples are below levels reached in the late 1990s, when many technology companies were posting losses and had negative book value. On the other hand, sales and enterprise multiples (Enterprise Value divided by Earnings before Interest, Tax, Depreciation and Amortisation - EV/EBITDA) are as high as they were in the late 1990s.

RATIOS ARE ALSO HIGH AT THE SECURITY LEVEL 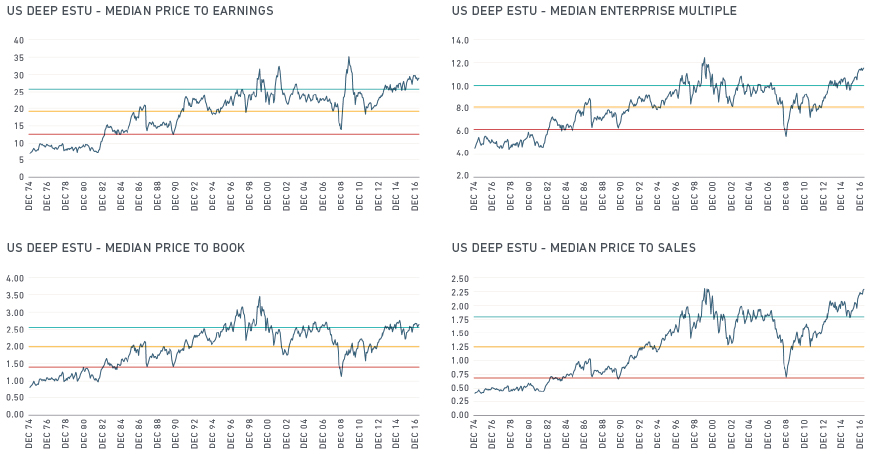 U.S. government and corporate bonds also show historically high valuations. The exhibit below shows nominal and real yield-to-maturity for constant-maturity U.S. 10-year Treasury notes over the period January 1975 to July 2017. We calculate real yields by subtracting the previous 12-month inflation rate from nominal yields. This exhibit also shows option-adjusted spreads for the BofA Merrill Lynch US Corporate Index and the BofA Merrill Lynch US High Yield Index over the period January 1997 to July 2017.3

As expected, nominal bond yields simply track the structural disinflation period of the past three decades and therefore provide little help in assessing current valuations. On the other hand, real yields exhibit mean-reverting properties and offer a more appropriate basis for assessing government bond valuations and prospective returns. They were at their most extreme negative in 1975, and were approximately three standard deviations above their mean in 1982 and in 2009. As of August 2017, real yields are about one standard deviation below average, suggesting that U.S. government bonds have slightly rich valuations compared to the historical average. Investment-grade and high-yield spreads were indicating that U.S. corporate bonds had extremely attractive valuations in early 2009, while they now stand less than one standard deviation below their long-term average, suggesting that corporate bond valuations are moderately expensive compared to the average. 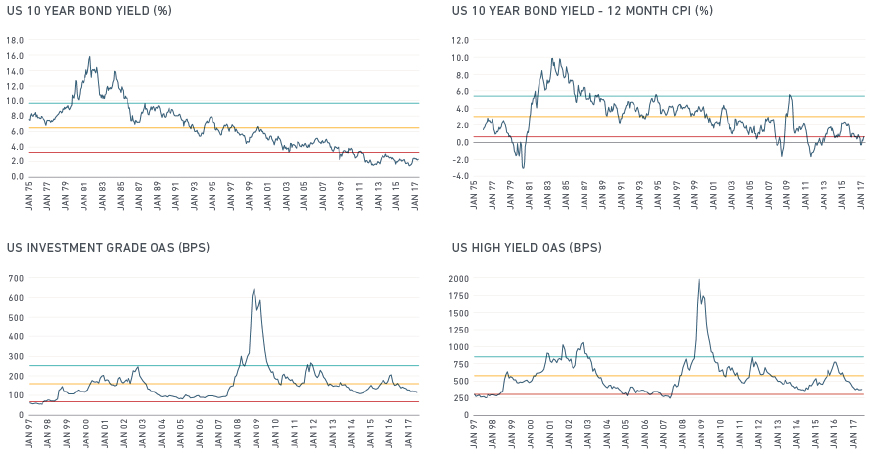 Our analysis indicates that both U.S. equities and U.S. bonds as of August 2017 traded at above-average valuations. Healthy corporate earnings along with low policy interest rates would support continuation of this trend.  On the other hand, a market correction could bring valuations down to average or even attractive levels.

The author would like to thank Saurabh Katiyar, Debkumar De and Hamed Faquiryan for their contribution to this post.

1 The MSCI USA Index covers large and mid-cap equities and contained 634 constituents as of July 31, 2017.

2 We study median valuation ratios across all stocks in the Barra US Total Market Equity Deep History Model (US DEEP) estimation universe (ESTU), which corresponds to the MSCI USA IMI. This index covers large, mid- and small-cap stocks and had 2,467 constituents as of July 31, 2017.