With new tariffs in effect as of July 6, we investigate our earlier assertion that “while an expanded trade war could lead to a ‘lose-lose’ outcome, there could be greater impact for stocks in the U.S. Overall, they are more exposed to the Chinese economy than the other way around.”1

Another observation from that blog was that revenue exposure provided insight into particular sectors that could be vulnerable to tariffs. U.S. information technology stood out for its relatively large exposure to China.

As we see below, March 7 seemed to be a turning point for well-known technology firms, such as Qualcomm Incorporated, Broadcom Inc., and Micron Technologies, Inc., as well as others in the sector that derive large percentages of revenue from China. Many that fared well from the start of 2018 through March 7 saw their fortunes reversed from March 8 through the end of June.

Next, we explore whether the selloff was broad based or localized to these firms. To do this we create a portfolio that selects the top decile of firms in the MSCI USA Index with revenue exposure to China. We equally weight this portfolio and compare its performance before and after March 7, 2018. We also compare it to a basket of U.S. stocks with low revenue exposure to China and the MSCI USA Information Technology Index.

Performance before and after tariffs were announced was linked with exposure to China across a broad range of stocks, as shown below. Equally interesting was that the technology sector, as a whole, continued to outpace the broad market after March 7. This may be due to the fact that the sector is heavy in the internet software and internet retail industries, which were less affected by the tariffs. In contrast, our simulated portfolio (MSCI USA Index with China exposure) was overweight computer electronics and food-related industries specifically targeted by China as developments escalated.

U.S. COMPANIES’ PERFORMANCE BEFORE AND AFTER TARIFF ANNOUNCEMENT 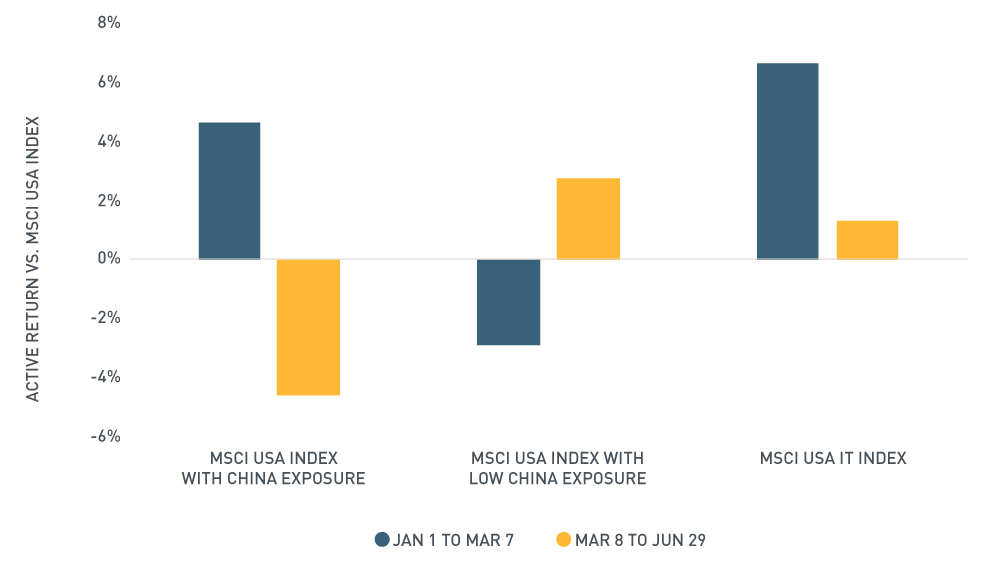 STRATEGIC STRIKES APPEARED TO PAY OFF

In fact, the precision of the Chinese tariffs on industries in specific constituencies and geographies became apparent when we examined the returns to industry factors. Pure factor returns can provide clear insight into specific industries and allow us to attribute sources of risk and return.

Here we use the lens of the MSCI U.S. Medium-term Risk Model to look at three of the targeted industries: semiconductors, semiconductor equipment manufacturers and food exports. We can see below that all three industries became more volatile throughout March, and then fell sharply mid-April with the first announcement of retaliatory tariffs. The two semiconductor-related industries plunged again in June as the U.S. and China announced the tariff hikes on another $34 billion in goods.

In short, sector exposure alone proved too wide a lens in certain scenarios. Investors may want to examine economic exposure, which, in this case, more precisely identified firms at risk across multiple industries – from soybeans to semiconductors – that saw their fortunes fall as they were targeted by retaliatory tariff announcements.