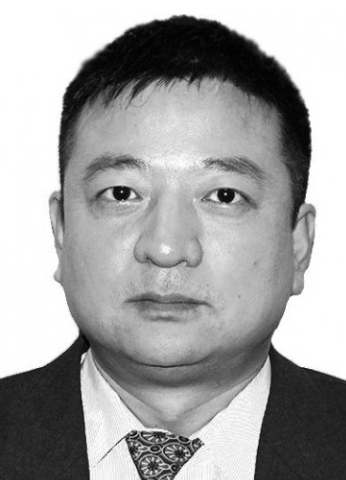 The market in Chinese residential mortgage-backed securities (RMBS) is growing, as global investors are eyeing the segment’s relatively high yield and potential diversification effect in fixed-income portfolios. However, attracting new foreign investment to Chinese RMBS may depend on improving credit ratings and transparency in data and pricing.

Foreign ownership of Chinese fixed-income securities has increased from 1.3% in 2017 to 3.8% as of 2020 year-end. But these holdings are almost entirely in Chinese government bonds, where foreign ownership reached 9.7% in January 2021, according to data from the China Central Depository & Clearing Co. By comparison, the proportion of non-U.S. ownership of U.S. fixed-income securities is much higher: USD 12 trillion of Treasurys, USD 6 trillion (about 15.4%) of U.S. agency mortgage-backed securities (MBS) and USD 1 trillion in nonagency MBS.1

What’s the Potential for Foreign Ownership of Chinese RMBS?

Chinese RMBS are the fastest-growing asset class in the second-largest bond market in the world. The outstanding balance increased from under RMB 7 billion to close to RMB 1.2 trillion in just six years — an astounding annual growth rate of 86%.2 These RMBS, issued and traded in the interbank bond market, are collateralized by residential mortgages underwritten and serviced by the largest state-owned banks in China.

Like U.S. MBS, RMBS make up the largest portion of China’s securitization market, with RMB 5.2 trillion in outstanding assets. The average remaining term of Chinese RMBS is around 12 years, the longest among all Chinese securitized products. Given the continued growth of the Chinese residential-property market, along with the fact that only a small part of existing residential mortgage loans on the state banks’ balance sheets are in the form of RMBS, the Chinese RMBS market has the potential to continue to grow rapidly.

The Rapid Growth of Chinese RMBS 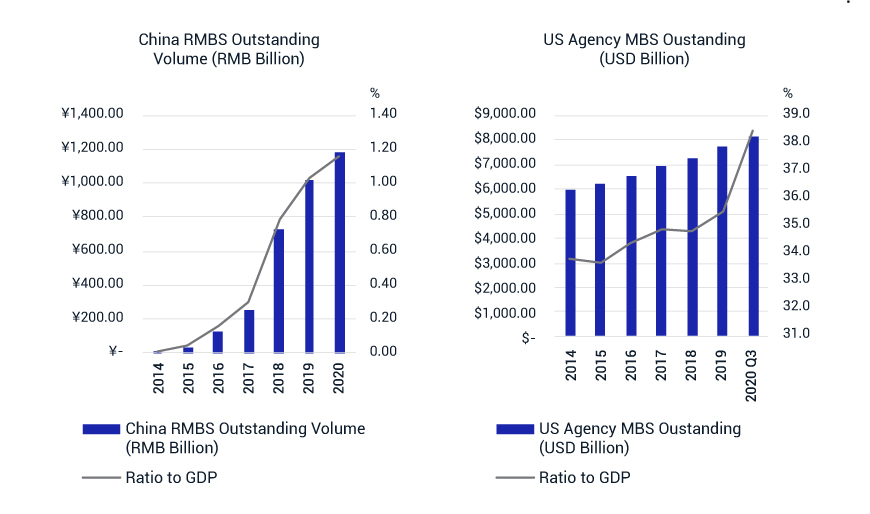 Contrasting Characteristics of Chinese and US RMBS

Sample Yield, Spread and Duration for Chinese and US RMBS

Both the mortgage-index rate and the RMBS interest rate are linked to the five-year loan prime rate (LPR) published by the People’s Bank of China (PBOC) and based on a survey of 18 banks. Compared with U.S. MBS, Chinese RMBS have had much lower prepayment rates and more predictable cash flows, as the exhibit below shows, thanks to Chinese RMBS’ annual floating rates and the lack of a refinance option for Chinese mortgage borrowers. Their durations have also been much shorter and not exhibited large negative convexity. 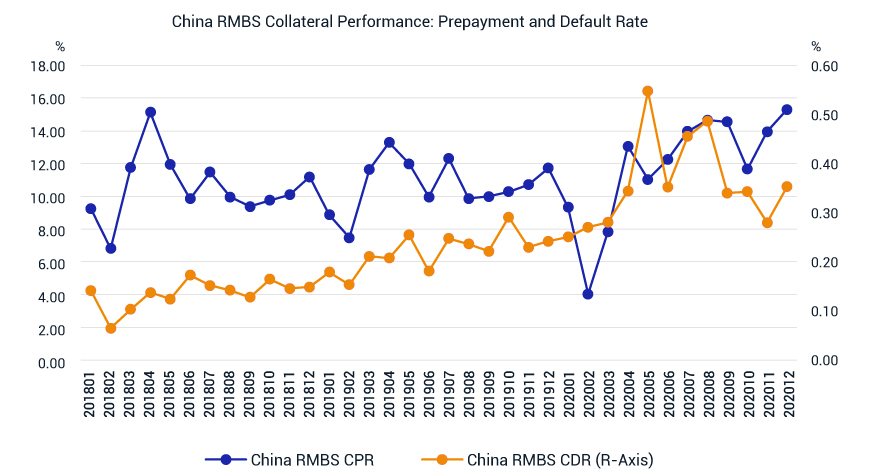 Chinese RMBS are not guaranteed by government agencies, as they are in the U.S., but they have had a historically low default rate, as shown in the exhibit above. Their average conditional default rate (CDR) over the last three years was around 0.22%, with a high of 0.55% in May 2020, amid the COVID-19 pandemic. The most recent CDR is 0.35%, which is back to the normal range. In addition, the AAA-rated senior RMBS tranches generally have a 5% to 20% subordination level for credit protection.

Chinese RMBS returns have displayed low correlation with those of U.S. fixed income. The exhibit below shows at-the-money Chinese LPR rates vs. U.S. mortgage rates. Overall, the benchmark rates and mortgage-rate spreads from the U.S. and Chinese bond markets have exhibited low historical correlation, which has enhanced diversification for investors who added Chinese RMBS to fixed-income portfolios.

Low Historical Correlation Between Chinese and US Rates 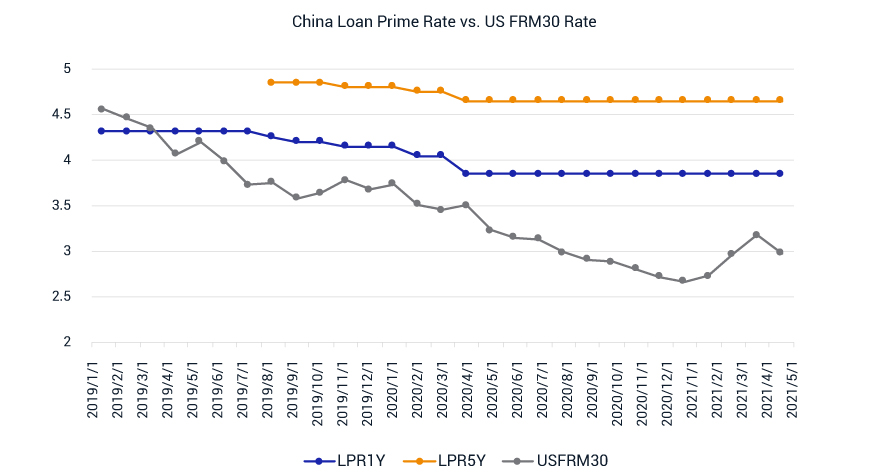 Of the 226 RMBS deals issued by various Chinese banks, totaling RMB 1.88 trillion in value, only nine deals were rated by the Chinese subsidiaries of S&P Global (eight deals with a total balance of RMB 84 billion) and Fitch Ratings (one deal with a balance of RMB 8.4 billion). Credit-rating coverage by internationally recognized agencies could improve, however. According to CNABS data, about one-third of the Jianyuan 2020 series (RMBS issued by China Construction Bank, the largest such issuer in China) was rated by S&P’s China subsidiary. As part of new banking policy in effect at the start of 2021, Chinese banking regulators the PBOC and China Banking and Insurance Regulatory Commission limited the overall residential-mortgage ratio in banks’ portfolios.4 This restriction could likely encourage more banks to issue RMBS and seek internationally recognized credit ratings to attract new foreign investors.

The Chinese Securitization Forum is also working to improve data-disclosure standards for Chinese securitization. In January 2021, a white paper titled “The Comparative Study of Information Disclosure Practices of the U.S. and China ABS Markets” was published by CSF and China Bond, along with CCB Trust, the leading issuer of China RMBS, and CNABS, a major analytics provider in the China ABS market. It draws on the U.S. Securities and Exchange Commission’s Regulation AB reform and proposes simplified loan-level data-disclosure guidelines. The paper has received widespread attention from ABS-industry practitioners and regulators.

A new COVID-19 Regime for MBS?