Do entrenched boards help or hurt stock performance of publicly held companies? We found that the involvement of entrenched boards, particularly at family-dominated firms, was a positive attribute over the five-year period ending March 2015, in both the U.S. and emerging markets.

We examined share performance of companies with entrenched boards in both the U.S. and emerging markets. We define entrenched boards as composed of directors with long tenure and advanced ages who often serve primarily the interests of family owners, company founders or other dominant shareholders. We looked at both family firms, where a family member is CEO or Chairman, or family interests are actively represented on board, and founder firms, where a company founder is CEO, Chairman or director.

Exhibit 1: Total returns for all companies 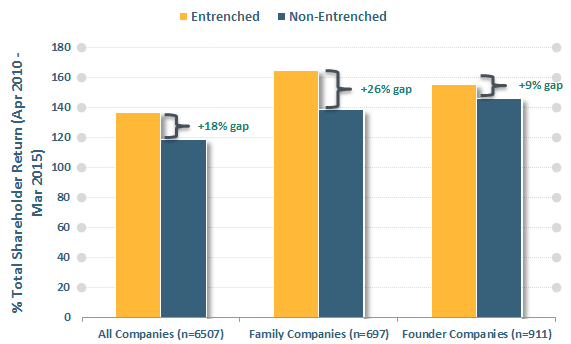 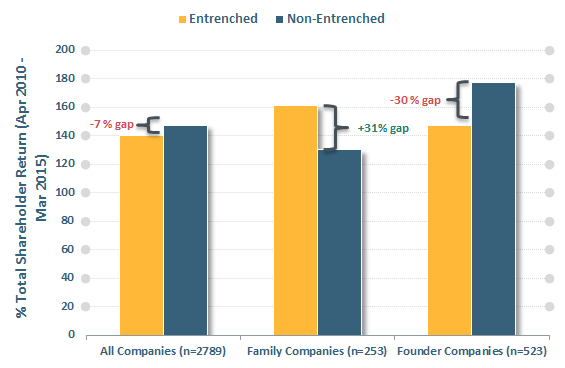 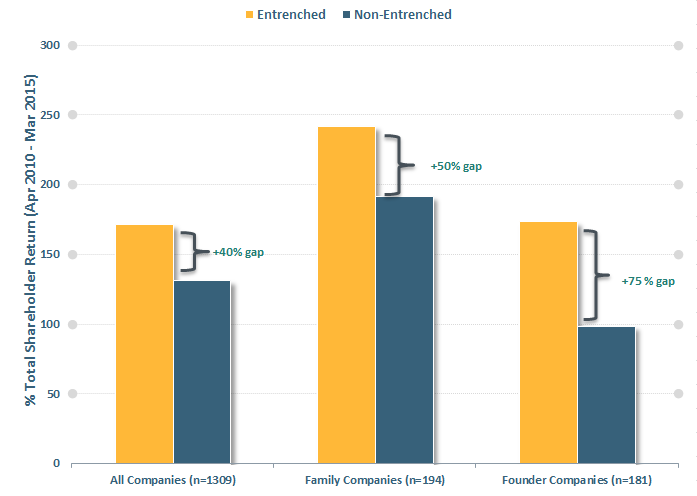 A number of countries have now adopted director independence standards based on length of tenure, effectively reducing the number of entrenched boards to be found in those markets. In France, the standard is quite explicit, with directors no longer qualifying as independent once they have served for more than 12 years. The U.K. standard applies a stricter tenure standard, but companies have latitude to keep non-executive directors who have served for more than nine years if they provide an explanation.

This approach has begun to gain traction in the U.S. as well. If the U.K. standard were adopted in the U.S., nearly 43% of all U.S. non-executive directors would be considered non-independent, up from less than 11% currently. At the company level, the number of U.S. companies whose boards would be considered to have less than a majority of independent directors would rise from 212 to 830, an increase of 618 companies out of the total of 2,789, and a percentage change from under 8% to nearly 30%.