Facebook’s privacy issues, Apple’s European tax woes and Amazon’s global ambitions are constantly in the news. And over the last few years, large U.S. technology companies, sometimes known as FAANG,1 have made up larger slices of the global equity market. Should their level of market concentration concern investors?

Earlier, we had examined whether the under-representation of FAANG stocks in U.S. factor-based strategies had caused factor investors to suffer in recent years. Now, we turn our attention to the concentration of the top five stocks in global equities,2 as proxied by the MSCI World Index,3 over a much longer timeframe. These stocks, all from the technology sector, collectively accounted for a weight of 8% as of the end of February. Over the past 43 years, an 8% market concentration in the global equities universe was just below the historical average — and well below the peak of 18% seen in 1977. In fact, during the 11-plus year period between December 1974 and January 1986, the weight of the top five stocks was constantly above their current collective weight.

The exhibit below shows the weight of the largest five companies in the MSCI World Index each month between December 1974 and February 2018. While this weight has now matched its late 2003 level, it remains 10 percentage points below its 18% zenith in 1977. Even today, the aggregate weight of the top five stocks is still slightly below its historical average, suggesting that this level of concentration is nowhere near abnormal. Interestingly, before the financial crisis of 2007-2008, the concentration in the top names was among the lowest in our 43-year history.

Let’s segment our period by decade and look at the month with the highest concentration in five top names in that decade. The exhibit below shows that the combined weight of Facebook, Apple, Amazon, Microsoft and Alphabet (the new name for Google’s holding company) at the end of February 2018 was actually the lowest during the past five decades.

Which companies have taken the top five slots historically? For each of these periods, we display below the company names and their weights. 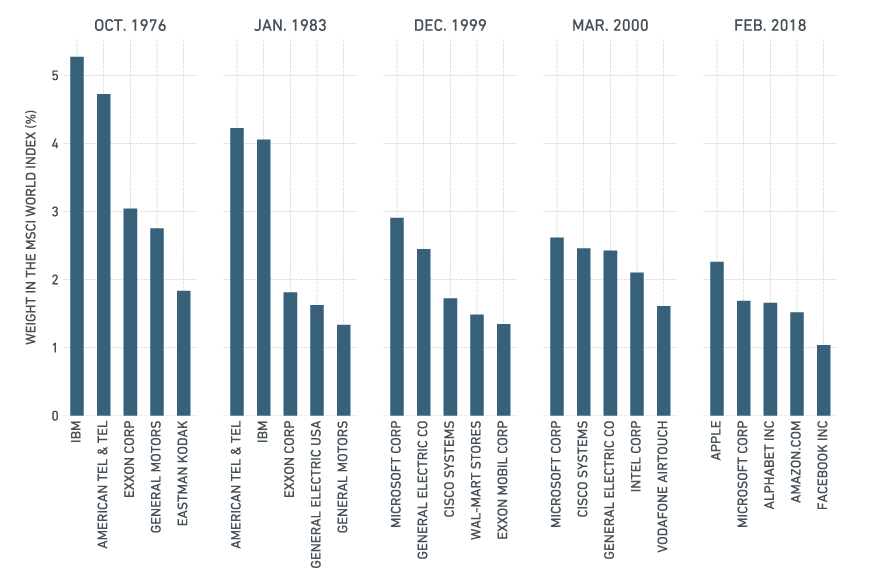 While today’s global equity market is more concentrated (measured by the collective weight of the top five stocks) than it has been in the last 15 years, it does not appear unusual if we look back to the 1970s and 1980s. In fact, the combined weight of IBM and AT&T alone in 1976 was greater than the weight of all the top five stocks today.

1 Popular acronym that stands for Facebook, Apple, Amazon, Netflix and Google. Variations include FAAMG (with Microsoft substituting for Netflix) and FANG (Facebook, Amazon, Netflix and Google). The effect of these stocks on market returns is not new and may be normal. See Asness, C. (2016). “SNAFU: Situation Normal, All-FANGed up.” https://www.aqr.com/Insights/Perspectives/SNAFU-Situation-Normal-All-FANGed-Up

Do Factors stand up to FAANG?