Evaluating the Impact of LIBOR Fallback

Evaluating the Impact of LIBOR Fallback

The planned discontinuation of LIBOR and other interbank offer rates sometime in 2022 will affect a large number of existing financial contracts based on these benchmarks.1 According to some estimates, LIBOR-based contracts (such as interest-rate swaps, floating-rate notes and syndicated loans) total more than USD 350 trillion in notional outstanding value globally.2 Contracts with maturities extending beyond the LIBOR discontinuation date (representing about USD 35 trillion in notional outstanding value for USD LIBOR) will need to fall back on a replacement rate — a transition that will likely impact those contracts’ values. Here we analyze the potential impact of LIBOR fallback provisions on the value of such contracts and estimate the amount of repricing that might have already occurred in recent months. Investors with large exposures to such instruments — such as banks, corporations and liability-driven investors — can proactively consider this repricing risk, as it may affect them well before the formal discontinuation of LIBOR.

Recent industry-led consultations on LIBOR fallback provisions have helped identify the likely replacement-rate candidates for LIBOR.3 Although the details are not yet final, the expected fallback provisions would replace LIBOR rates with alternative risk-free benchmark rates — such as the U.S.’s secured overnight financing rate (SOFR) and U.K.’s sterling overnight index average (SONIA) — plus a spread. The International Swaps and Derivatives Association (ISDA) has surveyed market participants on several rate and spread adjustment approaches.4

One proposed spread calculation approach, called the forward spread adjustment, would compute the spread using the market prices of derivatives. While theoretically ensuring no immediate value transfer for vanilla LIBOR-based instruments, this approach would require a liquid derivative market and is sensitive to the assumptions used in the calculation.

The other, more popular approach, the historical mean/median spread adjustment, computes the spread using a long-term series of historical values.5 While this approach is straightforward to implement and is based on historical data only, its adoption would likely cause changes in the value of LIBOR-based contracts. Furthermore, contract repricing could occur as soon as the market converges on the replacement rate. 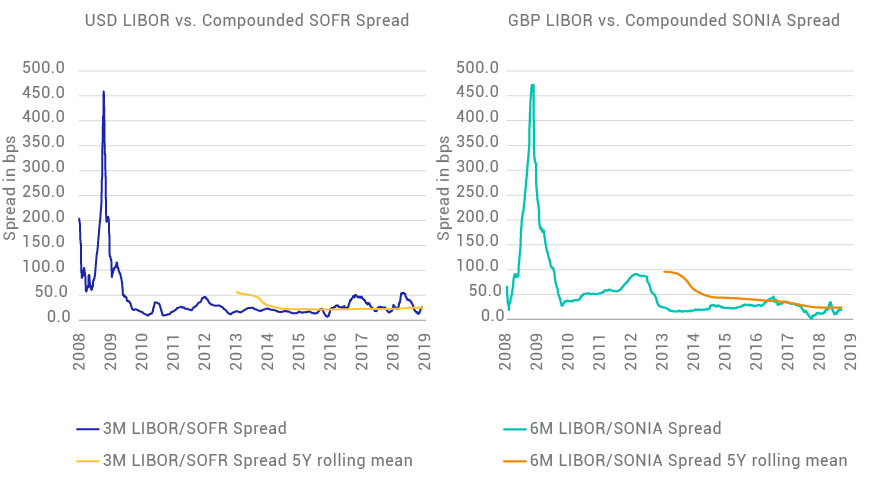 Historical spreads between the most liquid LIBOR tenor and corresponding alternative risk-free rate for USD and GBP. Risk-free-rates were computed using compounded setting-in-arrears methodology. For the period prior to 2014, when the SOFR rate is not available, we used the general collateral financing repo rate as a proxy for SOFR. Means are calculated over a preceding five-year period.

We can potentially get a sense of whether markets have started pricing in the expected fallback outcome. As an illustration, we estimated the repricing impact for at-the-money vanilla receiver swaps, with remaining maturities of five and 15 years as of the assumed future LIBOR discontinuation date, under the historical spread adjustment approach.6 The exhibit below shows swap-value changes estimated under the same fallback scenario in December 2018 (i.e., prior to ISDA’s publication of the results of its consultation) and then again in February 2019.

Under this fallback method, the fixed-rate receivers would gain value, while floating-rate receivers would lose value, in the event of fallback triggering. However, the repricing impact became less significant over the three months between our analysis dates, indicating that market forward spreads have moved closer to the historical spread values following publication of ISDA’s consultation results.7

As this example illustrates, assuming the historical spread adjustment is incorporated into fallback provisions, sudden contract-value changes would occur if market forward spreads differed from historical spreads at the time of fallback triggering. Therefore, market forward spreads will likely converge to the historical spread values as the anticipated LIBOR discontinuation nears. While such convergence would prevent abrupt value transfer on the discontinuation date, it would effectively mean that value transfer had already gradually occurred before then. In other words, the LIBOR forward curve will have changed as a result of fallback specifications. Market participants could act on their existing LIBOR trades well before then under this scenario.

1 For simplicity of presentation, this blog post will refer to the various interbank offer rates as “LIBOR.”

5 The historical-spread adjustment method was favored by more than 60% of respondents to ISDA’s December 2018 consultation, making it the most popular approach to spread calculation. The method’s practical viability and low risk of manipulation were cited as primary reasons for its selection by respondents.

6The setup mimics what would hypothetically happen in the event LIBOR cessation occurs in February 2022, under the fallback using the historical five-year-mean spread-adjustment method. Original LIBOR swaps are forward-starting at-the-money receiver swaps, and in each case the fallback adjusted risk-free rate is assumed to be compounded setting in arrears.