Global property has delivered another stellar year of performance of 9.9%, the fifth consecutive year of strong returns since the financial crisis, and the best performance since 2007. A series of countries performed particularly well over the past year, most notably Ireland with a record return of 40%, but also the U.K. (17.9%) and U.S. (11.5%). The strong performance of global direct property were paralleled in the public REIT, markets, with a return of 19.5% — significantly outperforming global equities (at 10.4%) and government bonds (10.9%).

The continued strong performance for real estate, has been driven by a wave of capital, fueled by the cyclical and structural attractiveness of real estate. Cyclically, returns were boosted by the depressed prices following the financial crisis and the attractive yields (still at 5.4% globally) compared with bond yields and financing costs. Structurally, returns were enhanced by the increasing recognition of the way real estate can bolster performance and diversify risks for pension and sovereign funds as well as high net worth individuals. 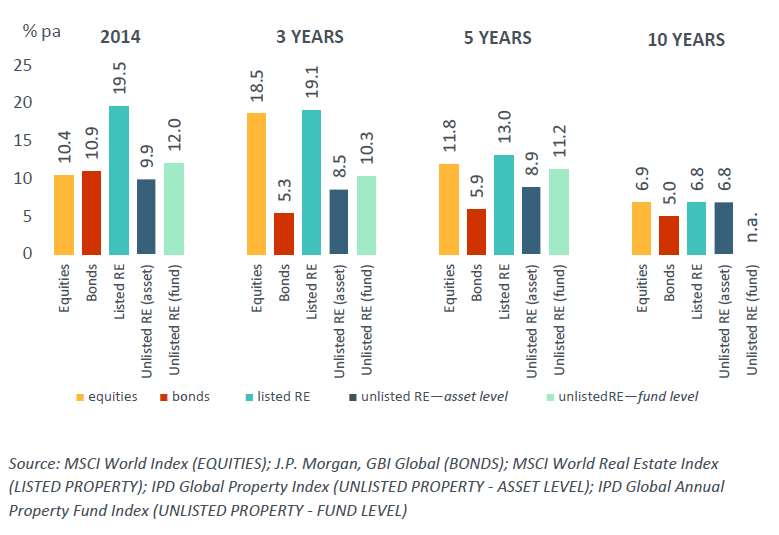 For much of the recovery, the best quality assets in the major cities of the U.K. and U.S. delivered strong performance. As the markets have recovered, there has been a broadening of performance, geographically and by type of real estate. There has also been a resumption of rental growth in certain markets. One of the most striking trends through 2014 was the turnaround in Europe. Although performance still lags the U.K. and the U.S., there have been  improvements in France and Germany and, more particularly, in Ireland, and Central and Southern Europe.

With much of the strong recent performance driven by falling property yields, there are growing concerns over the sustainability of such returns and how investors should position their portfolios.

On the one hand, income returns — which tend to account for the largest component of real estate performance — have fallen sharply, from an annualized 7.4% in the U.K. at the end of 2009 to 5.6% at year-end 2014, and from 7% to 5.3% in the U.S. between mid-2010 and year-end 2014. Is the strong run of returns over? On the other hand, these yields are down to levels not seen since 2007-8, the prior cyclical peak, which may suggest that the recovery has run its course. The question for investors: Is it better to reposition portfolios to withstand any future downturn or to deploy further capital in anticipation of further strong market gains? During a period of unprecedented macroeconomic uncertainty, this choice presents a major challenge for investors.

europe equity bond
Previous Next
Back to Blog Home