How could potential changes in U.S. mortgage policy and possible long-term industry trends affect mortgage-related fees and rate spreads? We find that recent developments could lead to lower fees, as well as compress rate spreads by roughly 45 basis points (bps). These long-term changes could in turn influence the direction and level of the primary mortgage rate, substantially impact prepayment risk in mortgage-backed securities (MBS) and create hedging challenges for holders of MBS. Investors may benefit from considering how changes in the level of mortgage-related fees could influence rates and spreads.

The primary/secondary (P/S) mortgage-rate spread — the difference between the primary mortgage rate and the current coupon yield of secondary to-be-announced (TBA) MBS1 — widened from approximately 45 bps before the crisis to roughly 100 bps in 2014 and 2015, but has since compressed to around 80 bps. MSCI’s mortgage-rate model2 aims to capture this complexity by taking into account both short-term movements and long-term trends, including the minimal spread widening that took place amid the recent 48-bp rally in the benchmark 30-year fixed-rate mortgage.3 Let’s inspect the trends driving the P/S spread’s two components: the government-sponsored enterprises’ guarantee fee (g-fee) and the origination fee. 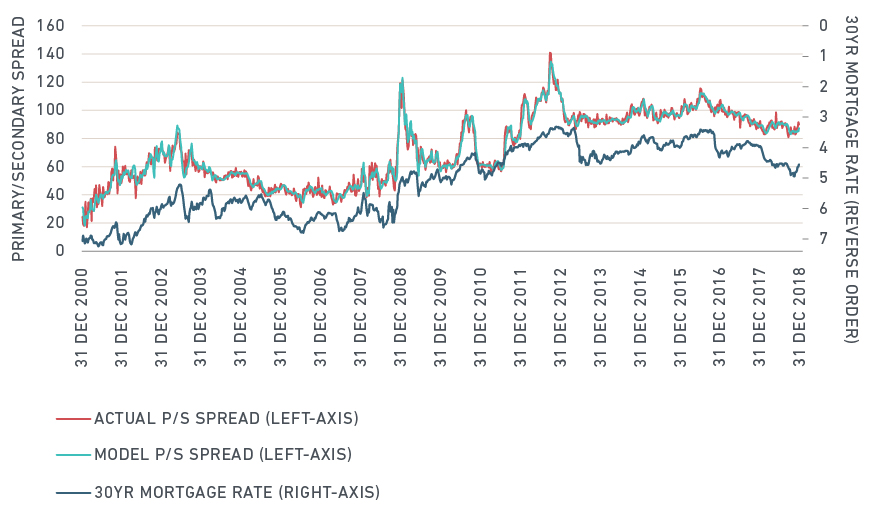 The g-fee, which has increased from below 25 bps before the crisis to above 60 bps in recent years, consists of two parts: 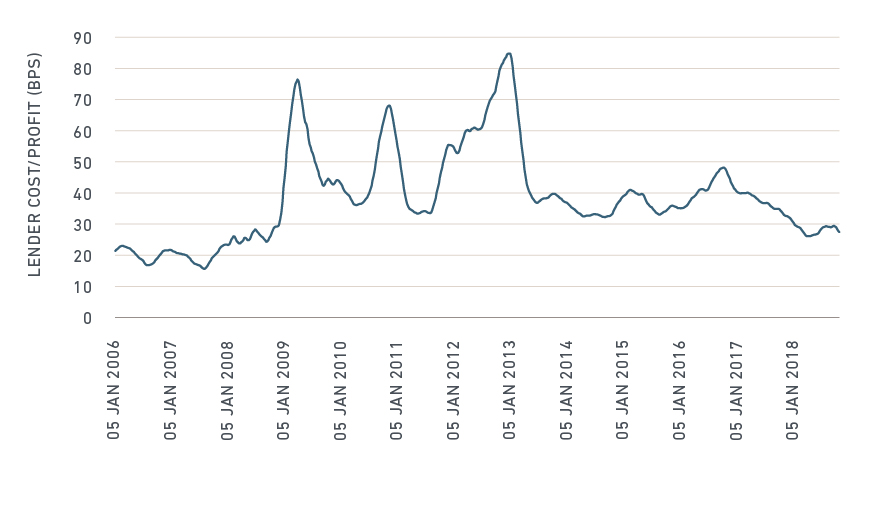 We have identified time periods with similar prepayment intensity (i.e., years with conditional prepayment rates of roughly 10%) and compared loan-officer employment with the average number of days to close refinancing loans. Current loan-officer employment is somewhat low by historical standards, despite post-Dodd-Frank-Act underwriting regulations. In pre-crisis 2006, there were more loan officers employed (418,000 vs. 320,000 today), and loans took fewer days to close (25 days on average vs. 39 days currently). Numerous technology vendors and non-bank mortgage originators have driven higher industry efficiency, among other reasons for this trend.7, 8

Loan-officer employment and closing times in periods with 10% CPR 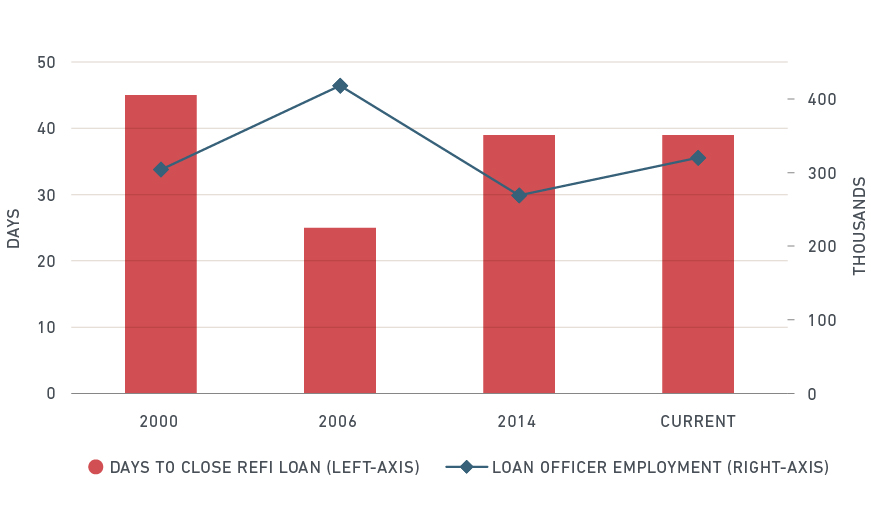 Putback risk can contribute around 5 bps to the current cost.8 GSE programs, such as Day 1 Certainty,9 aim to digitize the underwriting process (property-appraisal waiver, automated income verification, etc.) — an effort that may make loan origination more efficient and reduce putback risk. Also, mortgage underwriters in the years since the crisis have been held to much tighter standards than those in the pre-crisis era — further reducing putback risk.

The Federal Housing Finance Agency’s upcoming launch of uniform MBS (UMBS)10 will likely accelerate the GSEs’ efforts to fully digitize the mortgage process. A 20-day reduction could result in cost savings of $3,240, according to one industry estimate.11

The Tax Cuts and Jobs Act of 2017 (TCJA) lowered the corporate tax rate from 35% to 21%. The temporary profit boost will likely diminish over time due to competition. Based on our analysis, the new equilibrium level of lender cost/profit could drop by 7 bps.12

In sum, P/S spreads might compress by roughly 45 bps, driven by potentially lower G-fees (28 bps) and origination fees (17 bps), although the timing and amplitude of this spread compression remain uncertain. These potential long-term changes could have significant implications for MBS investors.

8 We assume 15% probability of a very adverse market environment, with 10% cumulative default; 50% of severity; 50% of putback probability; and 50% success rate of GSE putback effort.

12 We define after-tax ROE as: revenue x profit margin x (1 - tax rate) / equity. We assume that the most conservative hedging/funding with TBA and revenue approximately equals the P/S spread + upfront origination fee (including non-lender fees, such as for title insurance). We assume that, with the same after-tax ROE before/after the TCJA, we can estimate the new P/S spread and upfront origination fee to be roughly 5 and 2 bps lower.