How the Brexit Vote may Impact your Portfolio

How the Brexit Vote may Impact your Portfolio

While the long-term consequences for investors of the decision by U.K. voters to leave the European Union may take time to unfold, our analysis of the months that preceded the referendum shows that tremors from Brexit already have stirred up markets and upped systemic risk for Britain compared with developed markets generally. The question now is whether the waves will continue and how they may (or may not) intensify.

MSCI has examined two scenarios for Brexit: one in which the U.K. leaves the EU, trade barriers go up for Britain and little else happens, and another in which the U.K.'s leaving breaks up the eurozone. You can read the analysis here.  (MSCI clients can refer to our guide for implementing these stress tests or contact their consultant.)

What happens next will depend on whether and how the U.K. and EU go about negotiating the terms of their breakup, but, as discussed below, a look at the last few months through the lens of risk dynamics and economic exposures suggests that some equities and sectors stand to be affected more than others.

Though expected volatility has declined over the past few months as concerns from a slowdown in China and the effect on commodity prices attenuated, ex-ante risk in the U.K. has not corresponded with the fall-off in volatility in the rest of the world, according to MSCI’s Barra U.K. and global risk models. On the contrary, the gap in risk between Britain and the rest of the world has widened since May of last year, when Prime Minister David Cameron promised to honor his pledge to hold a referendum on EU membership if he won the general election.

The prospect of Brexit has upped risk for Britain 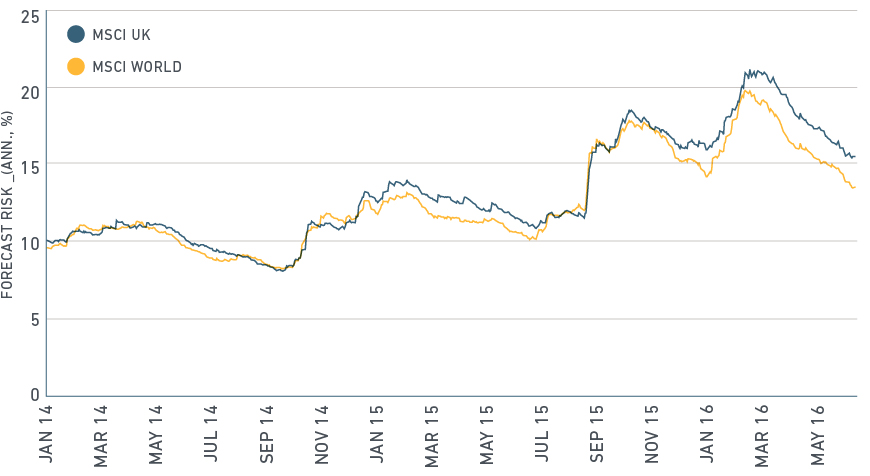 Perhaps more significantly, since the start of the year the market factor, which traditionally has an inverse relationship with the currency (the weaker the pound, the stronger the factor performance) now correlates positively with the pound, providing evidence that Brexit could change significantly the dynamics of the U.K. market.

Drilling down to cross-sectional volatility, systemic risk (in terms of styles and sectors) has increased over the last 18 months while idiosyncratic risk has held steady, suggesting that Brexit’s impact on the U.K. market – through business trades and exchange rates – could be more systematic than stock-specific.

MSCI’s economic exposure data quantify a firm’s exposure to different countries and regions based on the geographic distribution of its revenues. Looking at the revenue mix of U.K.-based companies shows that “U.K., Inc.” is hardly homogeneous.

Revenue exposure of companies by size and sector 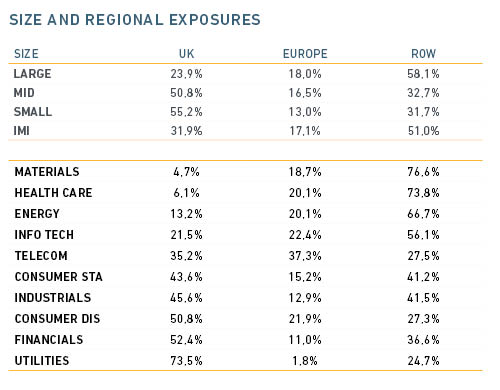 Large-cap companies tend to have more customers abroad while small-cap companies have more business domestically. The former benefit when the pound weakens, which improves their competitiveness and inflates revenues in local terms. And style factors such as size now seem to respond even more strongly to changes in currency values than they did a year earlier.

The differences also show up across sectors. Energy, materials and health care companies generate more than 85% their revenue abroad, while companies in the utilities, consumer discretionary and financials sectors generate more than half of their revenue from the U.K. Thus, the uncertainty in the run-up to the referendum may explain the recent depreciation of the pound versus the euro and the underperformance of U.K. stocks with higher domestic exposure. 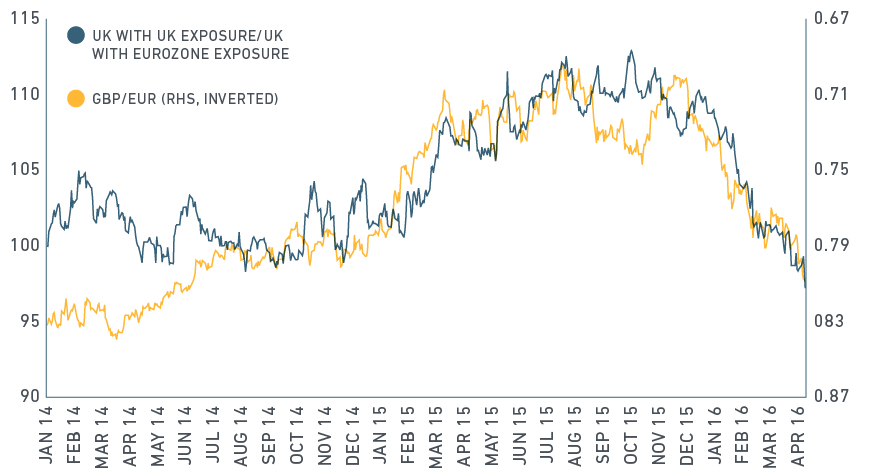 The only known right now may be that the uncertainty surrounding Brexit is likely to endure. Analysis of economic exposures and risk dynamics may help investors sort through it.

How Brexit May Impact Your Portfolio