Investors eager to write the obituary of the size premium might want to put down their pens. Small-cap stocks in developed markets outside the U.S. have been on a decade-long run of outpacing their large- and mid-cap counterparts.

As shown below, stocks in the MSCI EAFE Small Cap Index, MSCI Europe Small Cap Index and MSCI Japan Small Cap Index have outperformed broad market indexes by 5%, 6% and 4% annually, respectively, since 2013. The exception? The U.S., where smaller stocks lagged larger ones by 1% annually over the same period. 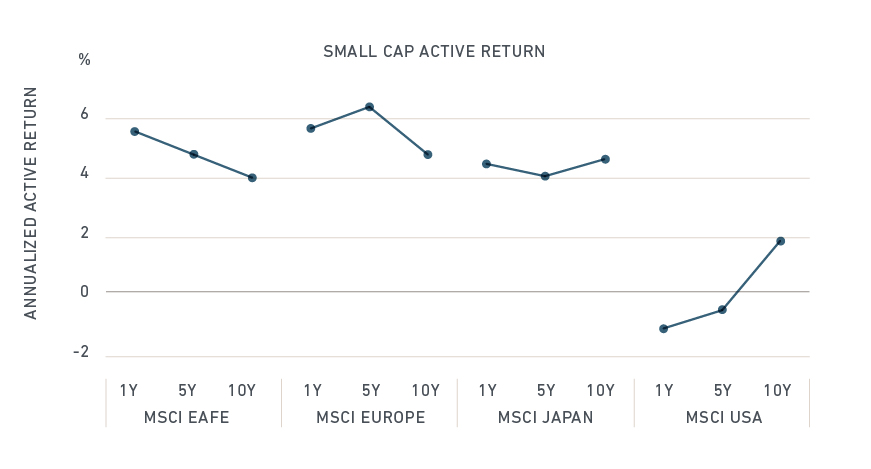 Each point represents the active return of the small-cap against the standard index. Returns are gross in USD and annualized through April 2018.

Importantly, the returns have been due to earnings growth rather than an expansion in earnings multiples. This matters because, as we have demonstrated previously,1 dividends and earnings growth reflect the health of the core business and are the principal drivers of long-term stock returns.

Until the last year, the larger European firms struggled to grow earnings. Yet, as the exhibit below shows, smaller European companies showed no signs of malaise. They steadily grew their earnings over the last decade, with double-digit earnings growth since 2013.

MSCI research showed that firm-specific news is a larger driver of differences in small-cap stock returns than it is for large-cap stocks. This may present opportunities for small-cap active managers focusing on security selection. However, attributes shared across many firms can have substantial effects on indexed strategies, as the style, country and sector makeup of small-cap indexes differs from their large-cap counterparts.

We looked at the MSCI EAFE Small Cap Index as one illustration to trace how these differences affected performance for the five years ended April 2018. This index includes over 2,300 companies across developed market countries, excluding the U.S. and Canada, and has approximately $2.6 trillion in market capitalization.

Compared to the MSCI EAFE Index, which includes large- and mid-cap firms in the same developed market countries, the MSCI EAFE Small Cap Index was underweight France and overweight Japan. From a sector perspective, it had a large underweight to financials – particularly banks – and an overweight to industrial companies. Weightings are based on the five-year average ended April 2018.

Smaller firms have tended to generate more of their revenues in their home markets than internationally. This has historically made them more sensitive to their local economies. As shown through the lens of MSCI Economic Exposure below, firms in the MSCI EAFE Small Cap Index generated a higher share of their revenues within Japan and the European market, compared to their large- and mid-cap counterparts. In fact, the active returns of European and Japanese small caps have had a near zero correlation over the past decade.

OUTPERFORMANCE EXPLAINED MAINLY – BUT NOT COMPLETELY – BY FACTORS

The effect of these differences in revenue sources becomes clear once we examine drivers of return. These are shown below using the lens of the MSCI Factor Classification Standard (FaCS). The top four drivers of outperformance came from factors, led by the low size premium, followed closely by higher momentum. Additionally, small caps in developed markets outside the U.S. and Canada benefited from growth characteristics and relatively expensive valuations.

Looking further, we see that factors were not the whole story. The overweight to Japan and underweights to a trio of industries typically rich with multinational firms — banking, telecoms and oil and gas explorers — also drove outperformance.

Return decomposition of MSCI EAFE Small Cap vs. MSCI EAFE in USD from April 2013 through April 2018. Exposures for style factors are in z-scores, whereas exposures for industries and countries are in percent. Note that return contribution and exposure to Low Size, 1.4% and 2.0, respectively, are trimmed to fit chart.

Given that size is such a large component of the outperformance, we may ask what types of firms contributed to the size effect. The answer is machinery firms, principally from Japan and Germany. Industrial companies, many of them Japanese, grew earnings by selling into local markets.

In short, the firms in the MSCI EAFE Small Cap Index grew their businesses during a period when earnings growth was scarce throughout Europe, especially in the banking sector where larger European banks were whipsawed by a series of sovereign debt crises.

Investors may want to take note. It is true that, in an environment where U.S. technology giants are front and center, international small-cap stocks have been buried beneath the headlines. But (with apologies to Mark Twain), reports of their death have been greatly exaggerated.

Why are small caps different?

What matters for investors in the long run?