With the Federal Reserve raising interest rates and the majority of agency mortgage-backed securities (MBS) under the refinance threshold,1 how much do investors need to worry about refinance risk? Our model indicates that future refinance regimes would be similar to recent 2016 experiences, and this view is consistent with current behavior of MBS empirical durations. However, investors may want to remain vigilant, as the recent trend toward looser mortgage credit standards by agencies and regulators could increase the prepayment intensity of future refinance waves.

Generally, market expectation changes with regard to future refinance regimes would impact MBS valuations and duration risk. The exhibit below shows significant duration variations for pass-through securities under different potential refinance intensity assumptions, derived from the MSCI Agency Prepayment Model.2 More leveraged products, for example, interest rate-only (IO) and collateralized mortgage obligations (CMOs), which rely heavily on models for hedge ratios and risk measurement, may have much higher sensitivities to these assumptions.

RECENT REFINANCE WAVES HAVE BEEN MORE SUBDUED THAN 2003

The agency mortgage universe has experienced multiple types of refinance regimes, as we see when we compare the 2003 refinance wave with more recent ones. The FNCL 2001 6.5s (Fannie 30-year 2001 origination 6.5s coupon mortgage loan cohorts) reached a conditional prepayment rate (CPR) of 80 during the 2003 wave, while those of FNCL 2008 5s, the most credit-worthy cohort after the global financial crisis, never reached higher than the lower 50s during its refinance waves.

The high refinance speeds in 2003 have been generally attributed to financial technology advancements, such as refinancing with the help of the internet, as well as a simplified mortgage origination process, including relaxed mortgage credit at that time. Though the former is still with us, the mortgage origination process has grown more complex and mortgage credit has tightened since the financial crisis, which may have contributed to milder refinance waves.

SIGNS OF A REFINANCE REGIME CHANGE?

To get another view of the multiple refinance regimes, we looked back over the last 10 years using our model, which employs a “macro credit variable” indicator to measure the combined effect of multiple factors on refinance intensity. Using the 1998 refinance wave as a benchmark, our model shows that after the surge in 2003 and subsequent pullback in 2009-2010, we’ve seen refinance intensity recover to about 80% of level. Looking forward, the model projects a further recovery back to benchmark by 2023. 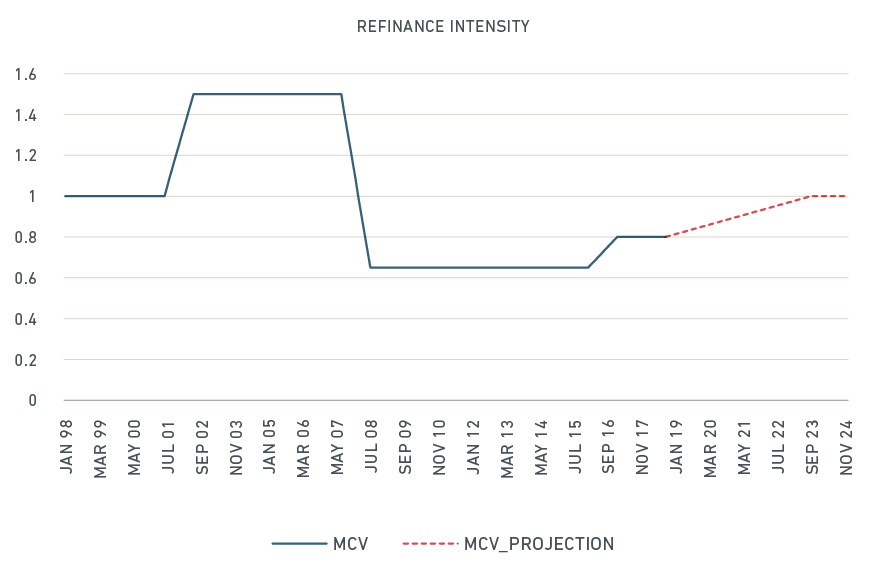 The increase above appears steady. However, the agencies and regulators have recently accelerated their push to relax mortgage credit requirements, which could have an impact on the speed of the next refinance wave. The recent changes include:

Another new development, on the other hand, is a new constraining factor of a higher refinance regime: the Uniform Mortgage-Backed Security (UMBS) program that will launch in 2019. To ensure the success of this unified TBA market for the combined Fannie Mae and Freddie Mac MBS universe, the FHFA has been working with the GSEs to avoid divergent prepayment performances by any mortgage originator.5

For example, Quicken Loans Inc., one of the largest non-banking mortgage originators and purveyor of the “rocket mortgage,”6 initially produced much faster prepayment speeds, compared with the industry average. However, these speeds have since slowed and converged with the MBS universe. (See exhibit below.) The example of Quicken shows that the work done to support the successful launch of the UMBS program has already demonstrated the potential constraining effects the program can have, while also providing a powerful reminder that the risk of a much higher refinance regime remains.

Quicken’s refinance rates appear to have been reined in

MSCI MODEL ASSUMPTIONS HISTORICALLY HAVE BEEN IN LINE WITH MARKET EXPECTATIONS

Given the uncertainties around future refinance regimes, we back tested our MSCI prepayment models by comparing the model durations with empirical durations that reflect the actual price dynamics of the MBS market historically.

While not indicative of future performance, looking at the exhibit below, we see that the MSCI models have been generally consistent with actual market pricing dynamics, with two exceptions:7 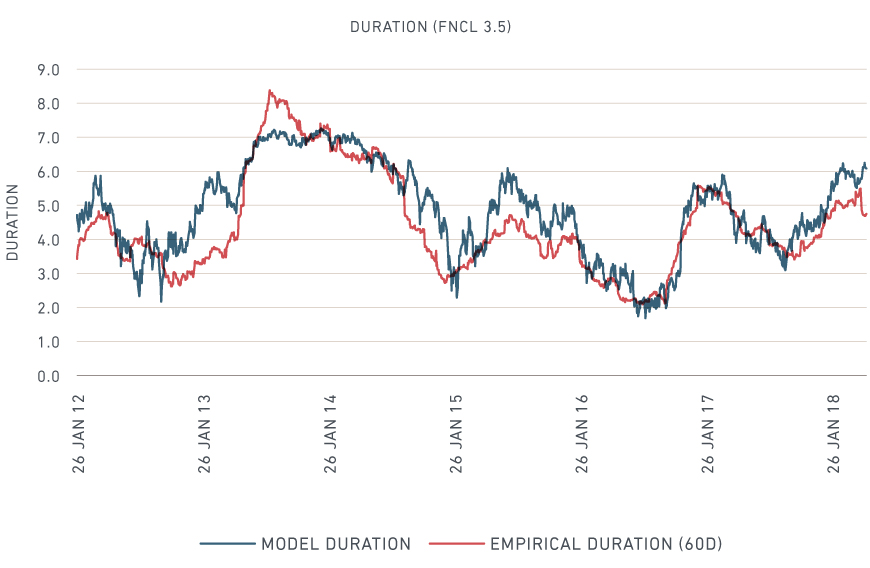 Our models indicate mild credit loosening going forward and future refinance intensity generally in line with recent performance, as opposed to the high-cresting refinance wave of 2003. The FHFA’s UMBS program could exert further constraints on large refinance surprises. However, MBS investors may want to watch the trend toward looser mortgage credit which could potentially lead to a refinance regime with greater intensity.