The professionally managed global real estate market size grew marginally to $7.0 trillion by year-end 2014 from $6.8 trillion at year-end 2013, according to MSCI. Currency movements reduced the global real estate market by approximately 7%. In contrast, capital value growth and new developments in the market, such as sale and leaseback transactions and new construction, were the main contributors to growth in market size. North America and Europe each accounted for some 35%-40% of the global universe, with the remainder in Asia-Pacific. MSCI measures investment performance on $2 trillion of this $7 trillion.

The U.S., estimated at $2.4 trillion, remained the largest market in 2014; its share of the IPD Global Annual Property Index grew to 39% from 37%, mainly due to the relative strengthening of the US Dollar. The U.K. moved into second position ahead of Japan, its weight increasing slightly to 11.2% ($680 billion). Conversely, Japan’s weighting decreased slightly to 10.5% ($640 billion), as the yen declined. 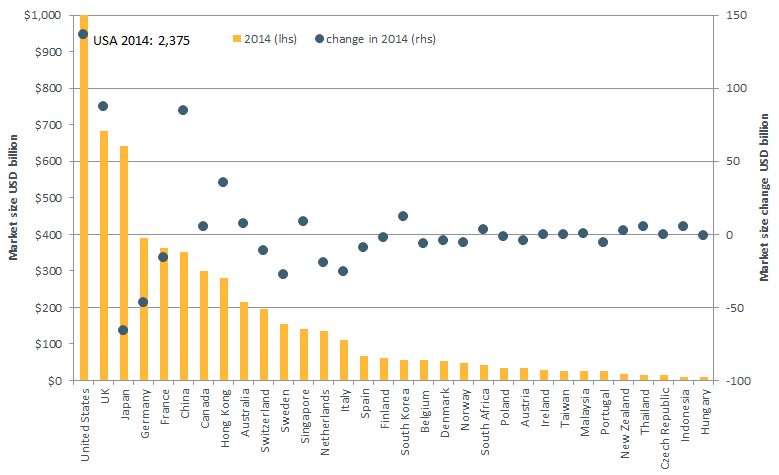 China was the largest emerging market, with an estimated value of $350 billion. However, given its rapid economic growth and the rate of construction in its real estate industry, we would expect China to outstrip both France and Germany very soon. The estimates for Hong Kong and Singapore were both larger than their city-state areas might suggest, due to high values per square meter, driven by strong demand and constrained supply.

An understanding of real estate market size is important for investors gauging the liquidity and transparency of different national marketplaces. These market characteristics play a key role in allocation decisions, particularly for large asset owners, many of whom are increasingly looking to globalize their real estate portfolios.

MSCI has been estimating the size of the world’s professionally managed real estate markets for over 10 years. The estimates cover the value of leased retail, office, industrial, residential and alternative sector properties, owned by institutional and large private investors.

The estimates are calculated bottom-up, identifying the value of all significant real estate investment portfolios in the 33 countries — different from much other research, which tends to involve top-down estimates using GDP or floor space estimates. This methodology seeks to provide a better understanding of relative sizes, as relationships with GDP are often unreliable.