The decline in Chinese equities and commodity prices this summer renewed investor concerns about a possible economic hard landing in the Asian giant. In particular, the 8.5% market plunge on August 24 spread fear into global markets that continues to this time.

As global economic and market uncertainty persists, a coherent and a structured approach to assess macroeconomic and market scenarios and their impact on investor portfolios is key. Investors can use a carefully designed stress test to quantify the potential impact of a China hard landing on global multi-asset class portfolios, combining the MSCI Macroeconomic Risk Model with RiskManager’s predictive stress testing. 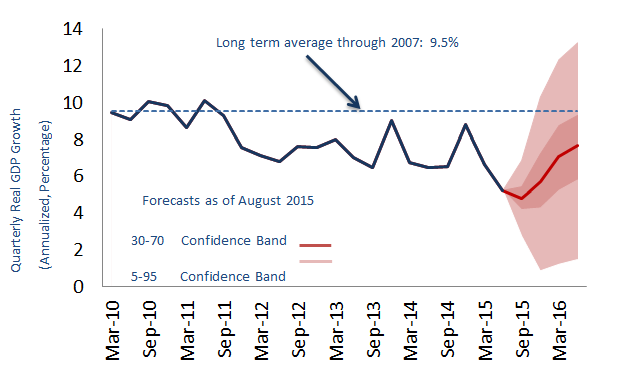 The first step in systematically evaluating a macroeconomic scenario is to define the baseline. According to the MSCI Macro Model baseline, China’s economy could grow by 7.1% over the next year. We define hard landing as a sharp drop in Chinese real GDP growth of 5.2 percentage points to about 2% – the equivalent of a two-standard deviation event relative to the baseline.

The second step is to trace the effects of the scenario to asset returns. We created a medium contagion scenario, reflecting that China’s economy is still not fully integrated with the rest of the world. However, in times of market turmoil, investors could perceive that the Chinese economy is more integrated with the global economy than it actually is, resulting in investor overreaction and greater contagion effects. Therefore, we also define a high contagion scenario that reflects some investors’ beliefs that the Chinese economy is as integrated as the U.S. economy.

Finally, we traced the effects of these scenarios to asset returns. Our findings indicate that the prospect of an economic hard landing in China may significantly impact Chinese, Emerging and Japanese equity markets. However, the impact on a global multi-asset class portfolio could depend on the investors’ perception of China’s economic integration with the rest of the world. While the portfolio might lose only 3% under the baseline contagion scenario, the impact could be a more severe decline of 8.4% under the high contagion scenario.