The global market for professionally managed real estate investments grew marginally last year, reaching $7.1 trillion in 2015, up 2.8% from a year earlier, according to the latest annual survey by MSCI of the largest markets for real estate investment in 32 countries. Fluctuations in the foreign-currency market distorted the changes in some countries and, when factored into the total, reduced the size of the market overall by roughly 4.6% in U.S. dollars. Conversely, appreciation pulled up some markets.

The U.S. share of the global market rose to 36%, up two percentage points from a year earlier and the sixth time in as many years that the relative weight of the American market increased (chart below). The gain resulted from both appreciation in the market and depreciation of many currencies against the dollar.

Share of market, by country, for professionally managed real estate (2009-2015) 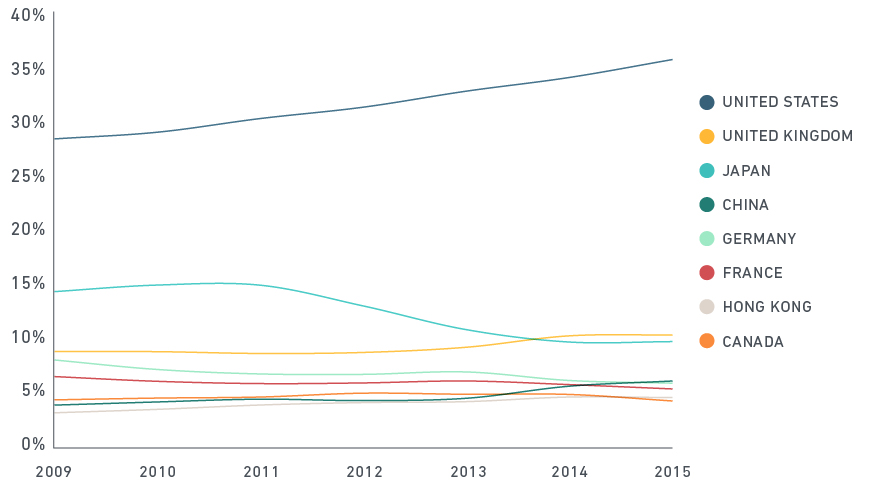 % of total capital value in USD of all 32 countries

The U.K., which in 2014 overtook Japan to become the world’s second-largest market property market, maintained its position at 10%. Japan, at 9%, remained third while China edged just ahead of Germany and France for fourth place, with all three markets now virtually tied at 5% apiece.

Attention to changes in the size of real estate markets relative to one another can help global investors make better-informed decisions about how to allocate capital. The relative size of markets also matters in the construction of benchmarks used to evaluate the performance of investments. In addition, benchmarks for multi-country indexes require weighting of each of the constituent markets by size.

The effects of capital appreciation, construction and foreign exchange

Appreciation and construction marked the main contributors to growth in markets worldwide in 2015. Appreciation of 6.7% and 8% (in local currencies) in the U.S. and U.K., respectively, topped the global average of 5.4% for the year, while Japan lagged at 4%.

Among markets broadly, Ireland grew the most, increasing 18.7%. Two markets, Italy and Indonesia, experienced declines of 0.9% and 3.8%, respectively. 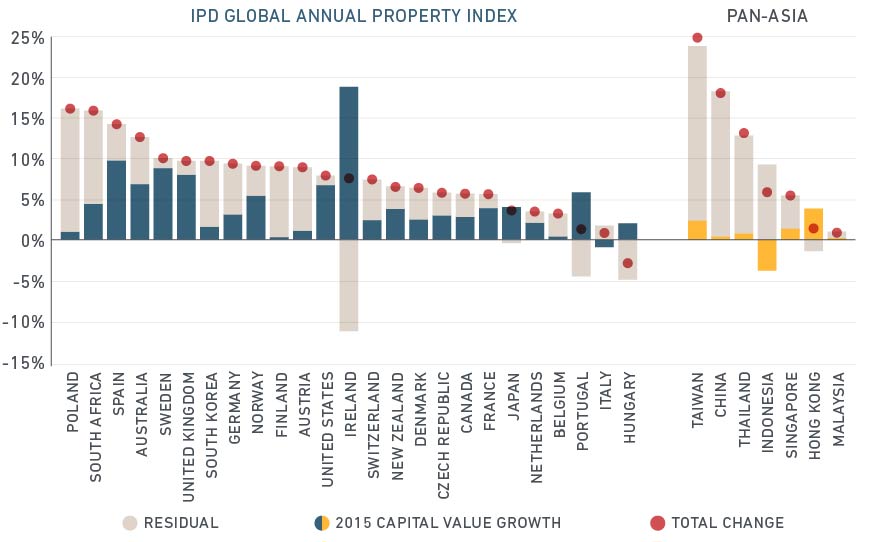 A series of factors also influenced the relative sizes of markets. Those factors include investment in both existing and new properties, sale-leasebacks that brought formerly owner-occupied properties to market for investment, the addition to the investable market of portfolios and transactions, and improvements in both reporting and the transparency and availability of information.