Unpacking the volatility so far

Unpacking the volatility so far

The year that began in January stands out for the uncertainty that has rocked the global economy. The search for growth, the prospect of deflation and a slowdown in China have combined to roil financial markets and challenge asset owners and managers worldwide.

The analysis that follows examines the performance of financial markets through Feb. 12, with the goal of shedding light on dislocations within them that we can view through the lenses of sectors, factors and investment themes. With the help of MSCI’s Global Equity Content Model (GEMLT), we also take a more nuanced view of some of the drivers of performance within industry sectors.

Taken together, the look-back goes beyond the headlines to understand what contributed to the volatility that marked the first six weeks of 2016.

An increase in aversion to risk

The sell-off in all global equity indexes that characterized the year to date suggests that investors increasingly fled risk. As Exhibit 1 shows, the MSCI ACWI Investable Market Index (IMI) lost 10.7% of its value as of Feb. 12, with a similar drop in both developed and emerging markets.

The sell-off hit Japan the hardest as that country struggles to revive its economy and combat deflation. Japanese stocks had tumbled 17.2% as of Feb. 12. Without Japan, developed markets of the Pacific region fell 12.5%. In Europe, where the European Central Bank has signaled that it may step up stimulus, a lag in growth spurred an 11.5% drop.

How other asset classes fared

Yields on long-term bonds fell in many major markets, while short-term interest rates increased, flattening the yield curve. A flattening yield curve had a negative effect on net interest margin, a main measure of profitability for banks, and led investors to worry anew about the health of financial institutions. Among sectors, financials posted the worst performance of the period.

The worries for financials were exacerbated by a widening of spreads among high-yield bonds and a simultaneous decrease in new bond offerings. In part, this reflected concerns about defaults in the shale oil and gas business, which has been stressed by the plunge in oil prices. The exposure weighed on banks exposed to credit risk in the energy sector and led some institutions to halt lending to oil and gas companies.

Beyond sparking fears of defaults by energy companies, the falloff in oil prices shadowed market sentiment and equity performance. Oil prices continued their slide, with the price of U.S. benchmark West Texas Intermediate crude down 20.1% for the period, as of Friday. Many other commodities have fared poorly, too, with most indexes off as much as 10% since the first of the year. The pessimism that marked commodities markets produced a divergence between gold and copper, with gold up 17% and copper, historically an economic indicator, down 4.6%. (Silver gained 13.2% over the period.).

One surprise among currencies was a strengthening of the Japanese yen against the dollar--by 6.33% year-to-date – which reversed a trade on Japanese reflation. Not surprisingly, most of the gains occurred since January 29 this year, when the Bank of Japan adopted a negative interest rate.  Meanwhile the Mexican peso weakened by 8.65% against the dollar. The slackening of the peso, the most traded emerging-market currency, reflected sentiment towards emerging markets in general.

Downturns fueled by an increase in risk aversion tend to show a pattern of dislocations among sectors and investment themes that can be summarized as a flight to quality. In the year so far, we have seen signs of such flight accompanied by overlays of more idiosyncratic movements.

Exhibit 2 shows returns of the MSCI global sector indexes for the year, as of Feb. 12. With the exception of industrials and materials, cyclical sectors – consumer staples, financials and information technology – all underperformed. Defensive sectors, with the exception of health care, beat the broader market.

Note that sector performance alone captures a broad swath of the market that can obscure some important details. MSCI’s GEMLT model, which decomposes performance within industry sectors, allows us to uncover them.

Exhibit 3 shows the performance of industry factors that underlie the health care, financials and materials sectors. However, it is difficult to judge how significant a move is by looking only at factor returns without reference to the typical volatility of a factor, particularly over relatively short periods of time such as the year to date.

Below are Z-scores of factor returns, which are factor returns normalized by the factor volatilities supplied by the GEMLT model. For each reported period, we use the volatility predicted at the beginning of the period.

As the exhibit above shows, within the health care sector, which investors would normally classify as a defensive sector, the biggest drag on performance year to date (as well as during the last quarter of 2015) is biotechnology, which is hardly a defensive industry.

The negative performance of the biotechnology factor follows a drop of 0.84% in that sector that occurred last fall as drug prices underwent scrutiny. Divergences also appear in the cyclical sectors that outperformed. A breakdown of the materials sector into seven GEMLT factors reveals that most of its relative outperformance was driven by precious metals--especially gold producers.

Finally, we look at financials, which performed the worst among all sectors. Yet here, too, the factor breakdown confirms an economic effect. The worst performer by far is the capital markets factor, which includes investment banks. The only financial factor with positive performance this year is real estate, which, as it happens, matches the theory of increasing risk aversion.

The GEMLT model also allows us to deconstruct the performance of MSCI’s Factor Indexes. As Exhibit 4 shows, the MSCI Equal Weighted Index, which carries a significant small-cap exposure, and the MSCI Value Weighted Index, which reweights constituents based on sales, earnings, cash earnings and book value, underperformed the global market, as represented by the MSCI ACWI Index.

Momentum performed roughly in line with the market, whereas the indexes targeting Quality, Dividend Yield and, especially, Minimum Volatility outperformed. 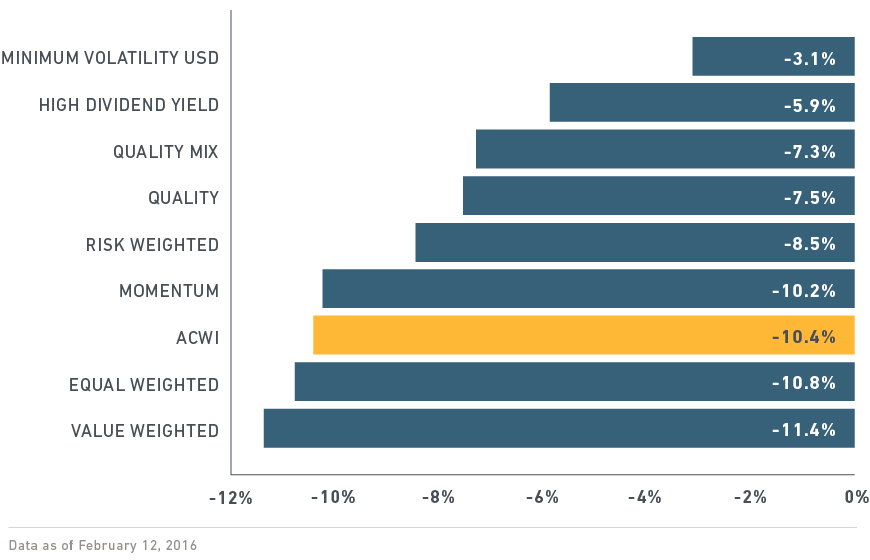 Again, it can be instructive to look beyond indexes to the underlying factors. Exhibit 5 lists the Z-scores of moves in style factors of the GEMLT model, grouped into eight factor families. 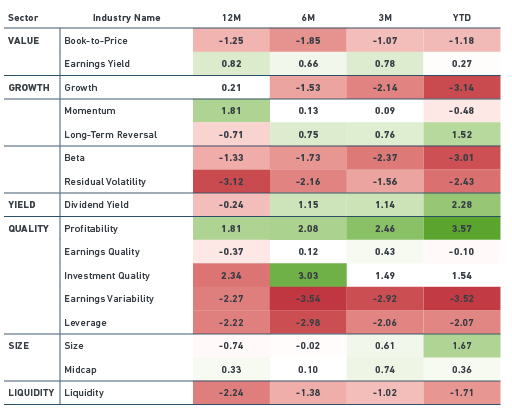 As the exhibit above shows, the relatively poor performance of Value was driven by book-to-price ratios, rather than earnings yields. Most of the losses of book-to-price occurred in the last quarter of 2015 and continued into the current year, as of Feb. 12.

Of all style factors, Growth suffered one of the largest negative moves on a risk-adjusted basis, with most of the falloff in the beginning of 2016. Momentum slightly underperformed since the start of the year. On a risk-adjusted basis, the loss looks significant, although the factor showed a higher level of risk over the period Jan. 1 through Feb. 12.

Given the large drawdowns in both Beta and Residual Volatility, the performance of Minimum Volatility makes sense, because it underweights both factors. The Dividend Yield factor also rallied since the start of the year.

Finally, we saw major movements in most Quality factors. The Earnings Variability and Leverage factors fell sharply, suggesting wariness among investors toward companies with uncertain cash flows and high leverage. On the positive side, the Profitability factor was rewarded massively, signaling a shift towards companies with high profit margins.

In Exhibit 6, we illustrate the rotation from cyclical to defensive styles through time series of selected Value, Volatility and Quality factors, beginning January 1, 2015. The chart emphasizes the year-to-date returns of the selected style factors in the context of their past year performance. The dashed vertical lines mark the past 12, six and three months, as well as the beginning of 2016, respectively. 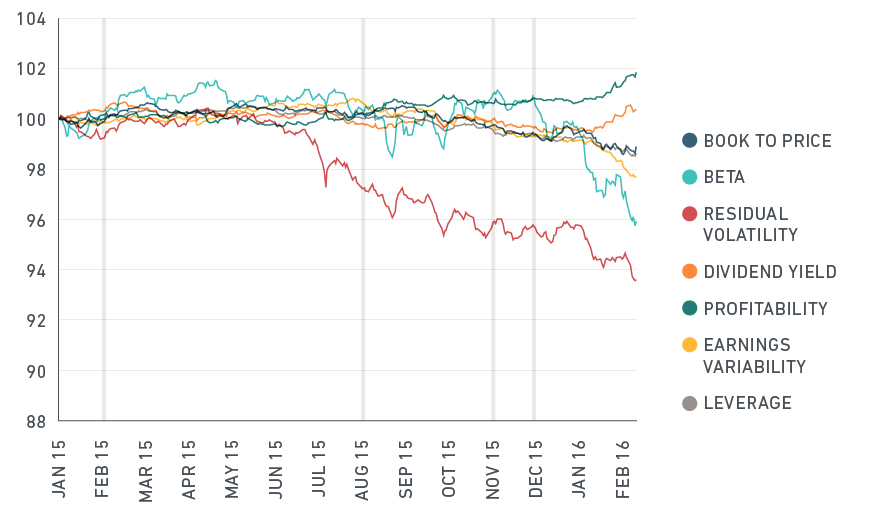 We find that increased uncertainty in the economic outlook has sent ripples across asset classes, geographies, industries and investment themes and has recalibrated market expectations. The behavior of regional markets, industries and strategies (especially Minimum Volatility, Quality and Yield) is symptomatic of increased risk aversion and an ensuing flight to defensive factors.

It remains to be seen whether the market reaction to a slowing of the global economy contributed to the volatility that marked the first six weeks of 2016. Whatever unfolds, knowing the dynamics that underlie contributors to the period’s performance can offer insight to institutional investors.

How smart beta has performed amid the volatility, February 16, 2016