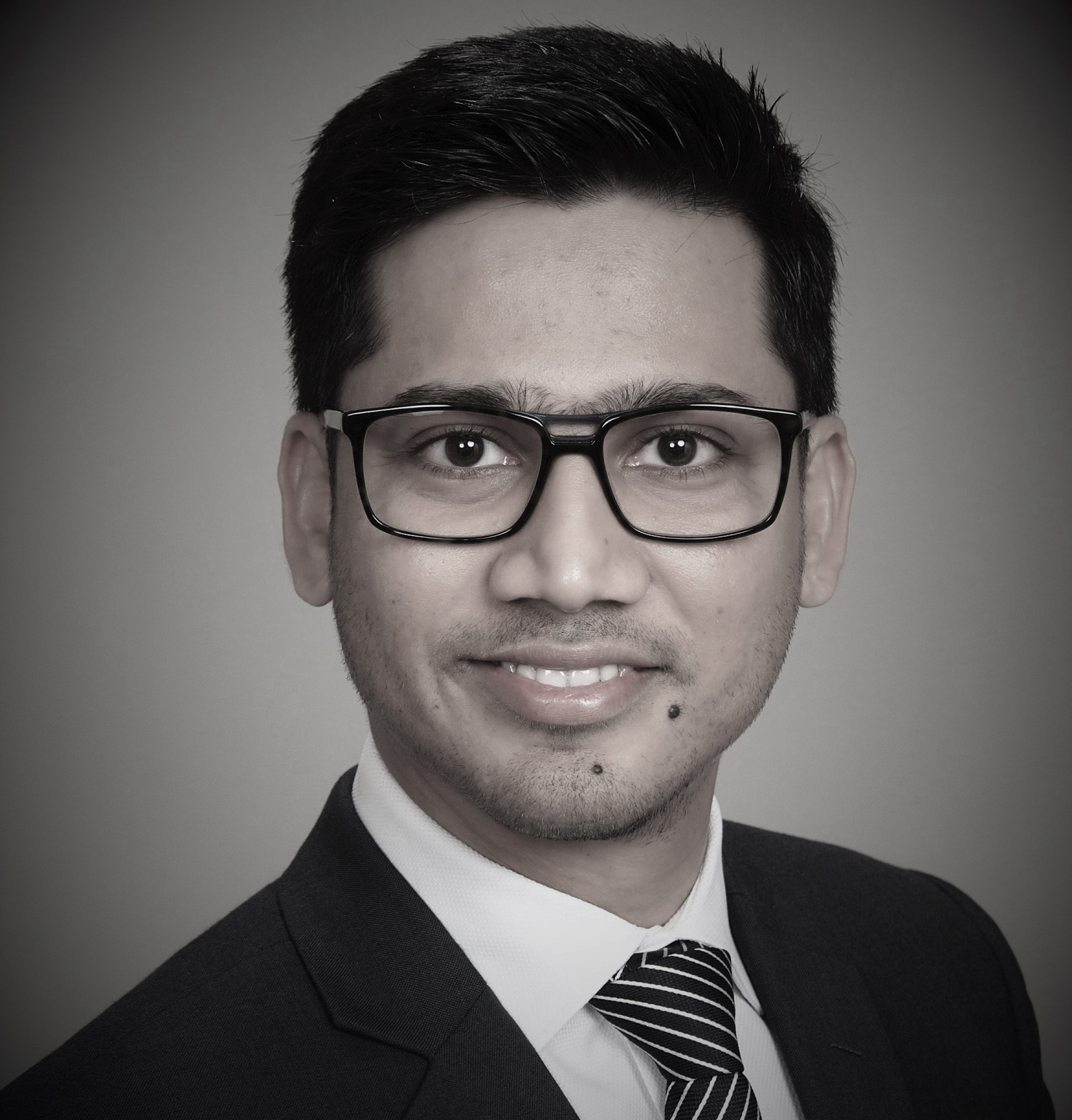 This post examines how factors have performed in different interest rate regimes. We also recently looked at factor performance during periods of high and low volatility.

As interest rates in the U.S. started increasing in late 2015, many investors expressed concerns over the impact that rising rates could have on their investments. However, the tone of the U.S. Federal Reserve (the Fed) shifted from “we’re a long way from neutral” in October last year to a more accommodative stance of “we will be patient” early this year. They re-emphasized that expression at the January 2019 Federal Open Market Committee meeting.

Today, many market participants expect a neutral rate environment in 2019, with possible rate cuts in 2020. This has implications for investors who may be assessing their factor allocations in the context of the current and potential interest-rate regimes. Our analysis shows that, historically, during periods when rates are neutral, the value factor has done well, while in periods of rate cuts, the minimum volatility and high dividend factors have turned in positive performance.

We’ve previously shown that factor portfolios differ in their sensitivity to trend growth and inflation.1 While both of these economic variables influence monetary policy decisions, we now examine a more direct relationship between factor portfolios and interest rates — and the implications for asset allocation. Specifically, we focus on how factor portfolios have responded to:

To aid in the first part of the analysis, we identified long periods of consecutive hikes and cuts in the federal-funds rate, each period lasting at least four quarters, with a change of 200 basis points (bps) or more.2 For the second part, we compared the federal-funds rate with the neutral rate to determine whether the current rate was above, at or below neutral.3 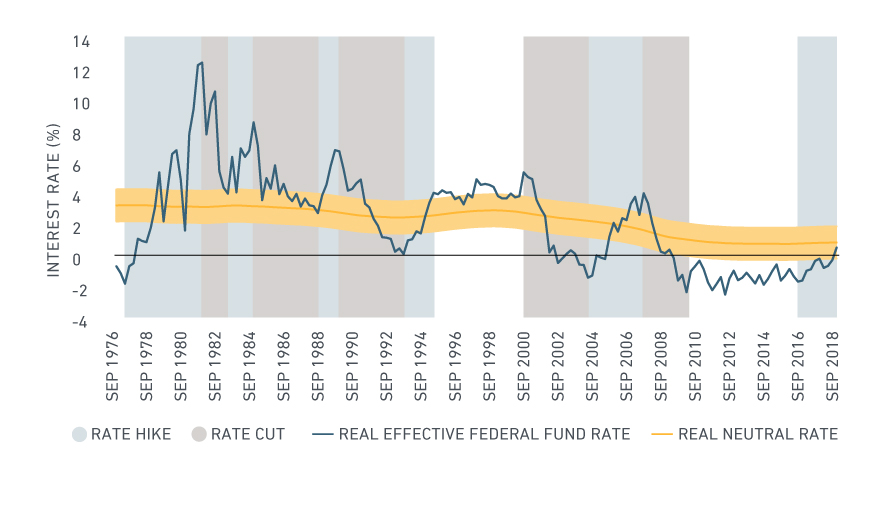 To assess the response of factor portfolios to interest-rate changes, we calculated the average annualized active returns of the MSCI USA Factor indexes as proxies across the two rate regimes from December 1975 to September 2018. For instance, the MSCI USA Equal Weighted Index outperformed the MSCI USA Index by 0.8% annually during periods of rising rates, whereas it outperformed by 2.4% during periods of falling rates. We compared these with the full-period active return for the MSCI USA Equal Weighted Index (1.4% annually) to understand how different the response was to rising or falling rates. 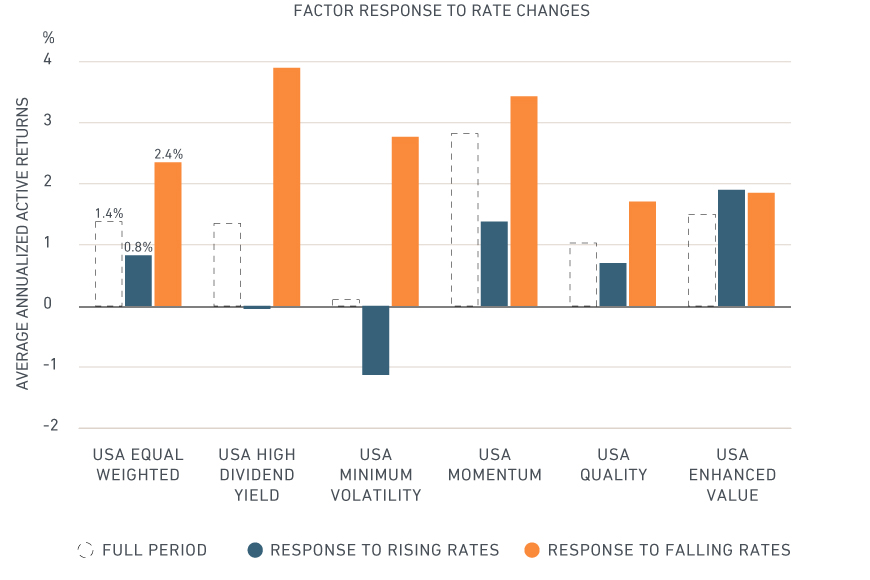 Overall, during periods of declining rates, all factor indexes responded positively, relative to their full-history active return and vice versa, though the magnitude of the response varied. Small-cap stocks (the low-size effect represented by MSCI USA Equal Weighted Index) that have historically had higher leverage were vulnerable to rising rates, but tended to manage cash flows better when rates were falling. On the contrary, larger “quality” companies that tend to be financially healthy and have lower leverage (represented by the MSCI USA Quality Index) were less affected by rising rates.

Income investors have gravitated to bonds over dividend-paying stocks when rates have risen. However, in falling-rate environments, the high-dividend portfolios have provided a “yield cushion” and traded at a premium. Last, low-volatility stocks have exhibited bond-like behavior when rates have declined,4 and value stocks have been less sensitive to rate changes.

Examining differential factor performance in periods when rates are above, at or below neutral 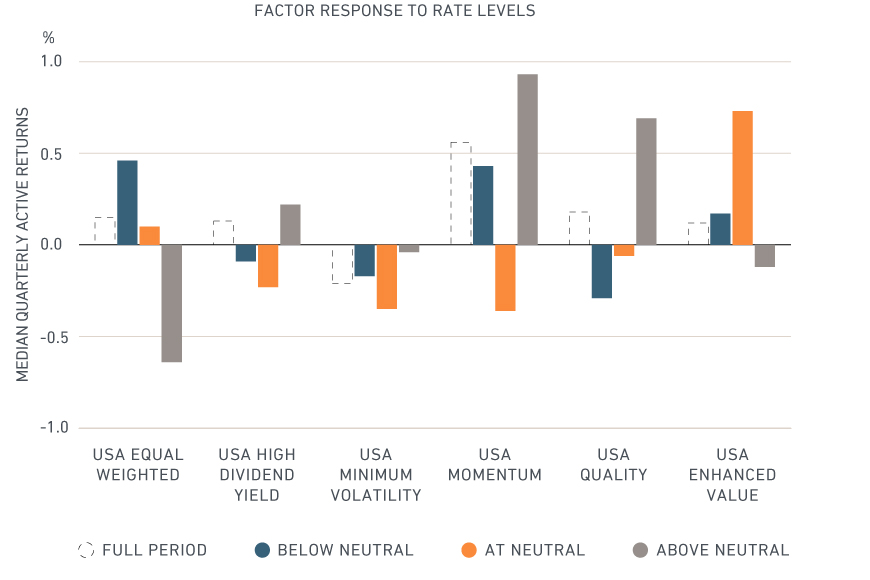 Given this background, as momentum has become expensive in a neutral-rate environment, investors have rotated into value. We took a closer look at the valuations of the MSCI USA Enhanced Value and MSCI USA Momentum indexes relative to the parent MSCI USA Index. The two contra-strategies are currently (as of Dec. 31, 2018) trading at historical valuations, with value at or around -2 standard deviations and momentum at or around +2 standard deviations away from normal. Such wide dispersion in valuations has historically been attractive to investors who are conscious of the current interest-rate environment.

Investors reassessing their factor allocations in the context of different interest-rate regimes may find it useful to look at how factor indexes have behaved historically during those regimes. Of course, interest rates are only one component of the various macro-economic variables to account for when modeling the economic state more precisely and reviewing the impact on portfolios.

2 We ignore shorter-term interim-rate movements. In a separate analysis (not presented here), we did not find a meaningful pattern or relationship between how factors differ in their response to short-term (quarterly) increases or decreases in federal rates.

3Neutral rate is commonly defined as the real short-term interest rate consistent with output converging to potential at stable inflation. The neutral rate is not observable. We have used Laubach-Williams for estimates of the U.S. neutral rate. Laubach, T. and J. Williams. (2003). “Measuring the Natural Rate of Interest.” Review of Economics and Statistics.

5 We calculate median quarterly active returns as the rates transition frequently between the three states: above, at or below neutral. Calculating median helps remove the effect of outliers.

What market volatility has meant for factors

What do rising interest rates mean for minimum volatility strategies?