Investors with global portfolios need to know where the companies they invest in are domiciled.  It is equally important, however, for them to know where those companies earn their revenue. Data from MSCI shows that the geographic distribution of companies’ revenues can have a significant impact on their stock prices. That’s true particularly following events such as Brexit that impact financial markets and trade.

A comparison of revenue by region for two British companies in the consumer discretionary sector illustrates the phenomenon. As the chart below shows, shares of Burberry, which earned roughly 10% of its revenues from the U.K. in the fiscal year ended March 31, gained more than 16% in the 22 days that followed the vote by the U.K. to leave the European Union. Shares of Barratt Developments, a U.K.-based homebuilder that derived all of its revenue domestically in the latest fiscal year, fell almost 30% over the same period. (The shares tumbled 40% in Brexit’s immediate aftermath.)

A tale of two revenue streams (as of July 15) 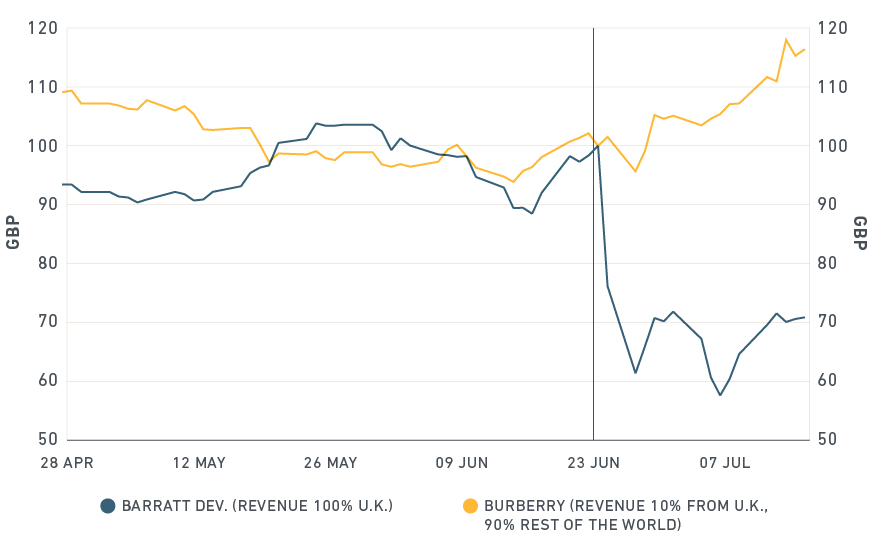 Of course, the sensitivity of share prices within a sector to ups and downs in the economy matters, too. Those movements explained nearly half the performance of cyclical sectors such as industrials, consumer discretionary and information technology in the two weeks of trading that followed Brexit, relative to defensive sectors such as utilities and consumer staples.

Still, investors who aimed to understand the performance of equities in the aftermath of Brexit but who overlooked revenue exposure (which we refer to alternatively as economic exposure) would have missed more than a quarter of the reason why their shares moved as they did. Together, economic sensitivity and revenue exposure illuminated almost three-quarters of sector performance post-Brexit. 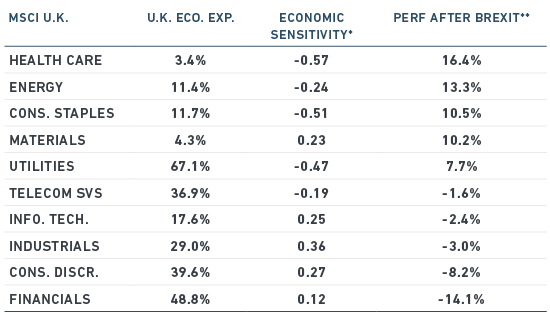 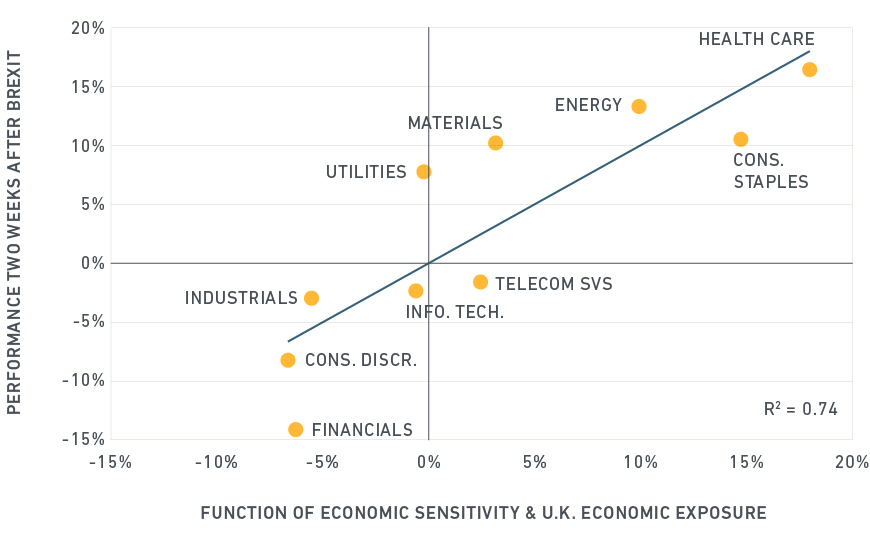 The impact of revenue exposure on stock prices extends beyond the borders of Britain. Though Brexit reverberated primarily in the U.K., the shock also showed in the performance of equities in Europe and around the world (below table).

POST-BREXIT PERFORMANCE OF GLOBAL STOCKS IN IN THE U.K. AND BEYOND

Mapping the revenue of sectors worldwide based on exposure to Europe shows that those sectors with the greatest exposure to the Continent tended to underperform globally in the aftermath of the vote. As the performance of markets in the backwash of Brexit suggests, the ability of investors to analyze the geographic distribution of revenue in their portfolios may improve the process for constructing portfolios and measuring performance.


The author thanks Jean-Maurice Ladure for his valuable insights and assistance.