Russia’s invasion of Ukraine was followed by a marked increase in stock-market volatility. The Cboe Volatility Index® (VIX) spiked from 28 on Feb. 23 to 37.5 the next day. As new sanctions were imposed on Russia, including blocking some Russian banks from the SWIFT interbank messaging system, it was easy to think the markets would not remain hospitable.

We looked at the major wars since 1990 in terms of equity-market performance, approximated by the MSCI ACWI Index, and market volatility, approximated by the VIX, to see whether history provided any lessons. The exhibit below shows that most of these wars had only a short-lived impact on equity markets and volatility. We saw neither the reversal of prewar market trends nor persistently high market volatility in the weeks after the conflicts began.

More specifically, the average return of the MSCI ACWI Index during the three months leading up to and after each event was -0.5% and -0.1%, respectively. Additionally, the average duration of heightened volatility following the wars was around 20 days.1

A key reason for this relatively mild impact was the largely contained scale of the wars in recent decades (in terms of the regions and length of these conflicts), as well as limited economic linkage of the targeted economy to the rest of world.

Of course, whether history will repeat itself remains to be seen. 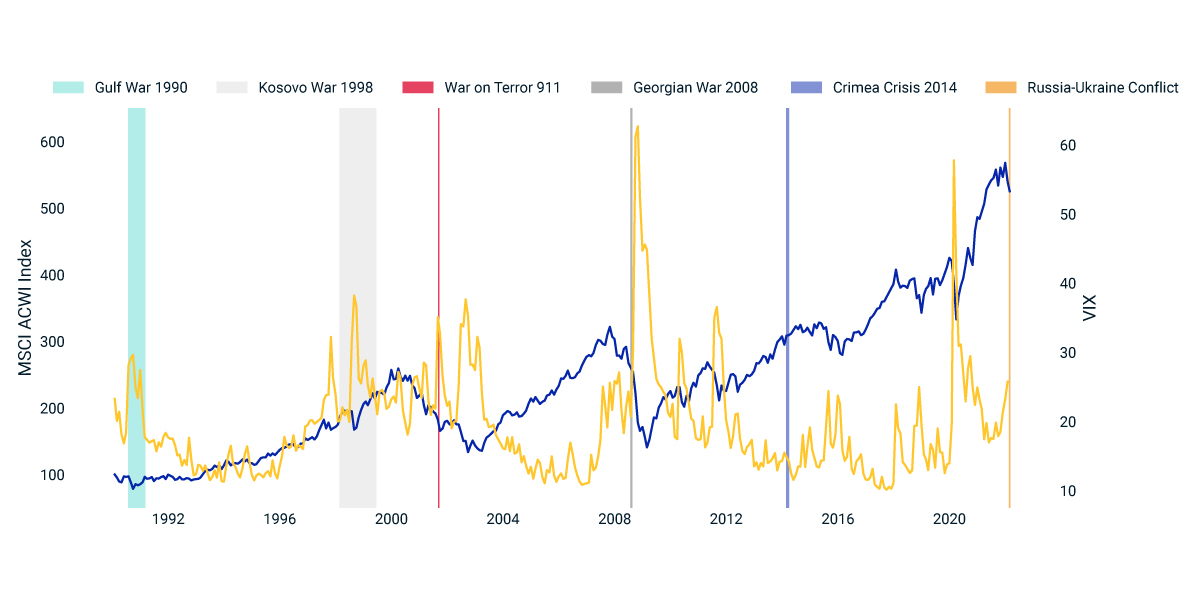 The Russian invasion of Ukraine is another reminder that geopolitics play an outsized role in determining economic relations between countries.

1 Heightened volatility periods were days when the VIX was above 30. The Russo-Georgian War is excluded from the historical average change calculation to eliminate the impact of 2008 global financial crisis.