With employment generally strengthening and inflationary pressures rising, fixed-income markets are increasingly focused on central banks tapering bond purchases and ultimately retiring their quantitative easing (QE) programs. Key questions now facing institutional investors include: What has been the impact of the QE programs? How much of this impact could be reversed as the programs are eventually wound down?

Since the 2008 financial crisis, central banks have been buying bonds and other assets as a way to reinvigorate the global economy. As part of these QE programs, the European Central Bank (ECB), the Bank of Japan (BOJ) and the Bank of England (BOE) have bought corporate bonds; the ECB is the largest buyer, with €89.2 billion ($99.8 billion) outstanding as of May 26, the latest data available.

While we are not prognosticators, the strong performance of corporate bonds since launch of the program suggests that spreads could widen if the ECB reduces its program faster than expected.

At a recent MSCI investor conference, 59% of respondents said that ECB tapering is likely to begin during the first half of 2018 and 15% this year. Regarding the ECB’s Corporate Sector Purchase Program (CSPP), 53% of respondents thought ECB buying had tightened spreads on eligible bonds by more than 20 basis points. Most respondents also believed that there had been important spillover effects to sectors ineligible for ECB purchases even to bonds from non-eurozone issuers.

Our research supports these responses and provides additional detail on spread performance across different sectors of the bond market.

How much has the ECB’s corporate bond program affected spreads?

The effect on spread returns 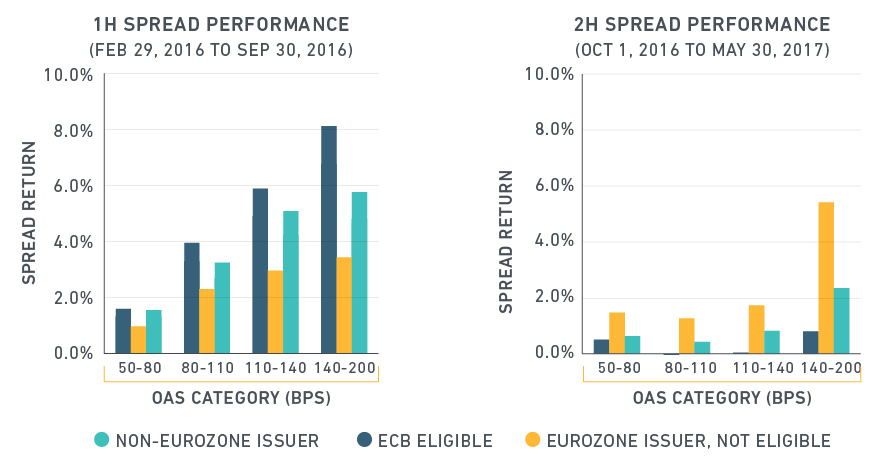 *OAS analytics and determination of ECB eligibility are from MSCI.

The strong initial ECB-inspired performance was followed by much weaker market performance during the following eight months, when the ECB sector posted generally negligible spread returns and significantly underperformed other sectors. This second period is characterized by rising inflation and growing market debate about the potential timing and magnitude of program tapering.

Despite weakening during the second period, the cumulative market-spread return on the Index over the combined period was 397 bps. The approximate option-adjusted spread (OAS) change over this period was -51 bps. 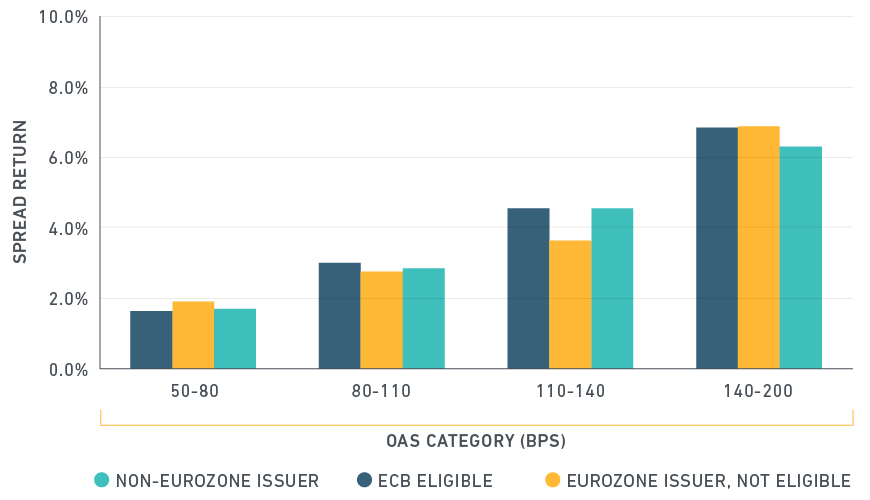 THE OUTLOOK FOR THE ECB’S PROGRAM AND BOND SPREADS

Investors continue to debate when and to what degree the ECB will pare its QE program. The weakening impact of the CSPP during the second period of our analysis suggests that the market is beginning at least to partially price in future tapering. While we do not attempt to address the likelihood or impact of different tapering scenarios, the strong performance of the euro corporate market since the CSPP’s launch suggests spreads may widen if the ECB scales back its program faster than expected.

1 We looked at the euro corporate bond market as reflected by the Bank of America Merrill Lynch Euro Corporate Index. To measure spread performance, we apply our performance attribution model based on daily bond-level returns. We split the ECB-ineligible sector into non-eurozone issues and eurozone issues (primarily subordinates and bonds issued by banks). Bonds are also grouped according to their option-adjusted spreads (OAS) to better control for credit risk and liquidity. Note that OAS accounts for the impact of embedded options that are present in many fixed-income securities and is therefore a better measure of value than yield spread.

The author thanks Nick Sharp and Aniko Maraz for their contributions to this post.