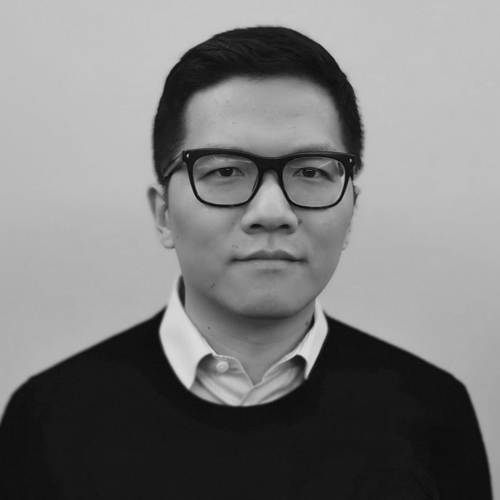 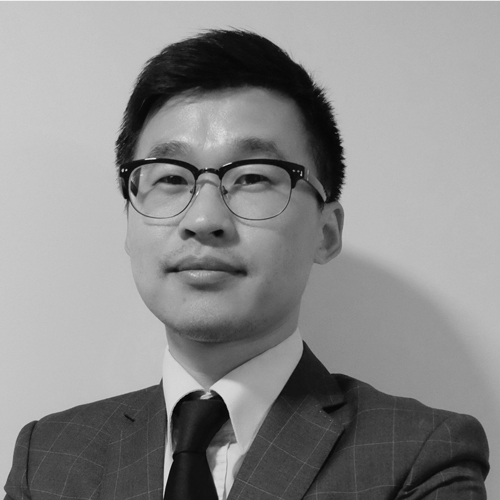 Following the recent sell-off in the Chinese equity market, global investors may have some concerns and questions about their China exposure. What drove equities downward? Has there been a fundamental change in China? What role did the Russia-Ukraine war play? What are the key indicators to keep an eye on?

The sell-off came after a period of negative performance that started in early 2021 and intensified in March 2022 due to a combination of domestic macroeconomic and global headwinds.

The exhibit below shows the long-term cumulative performance of major global indexes since 2011. Zooming in on the recent period, we see the global equity market, as measured by the MSCI ACWI Index, returned 19% in 2021. In fact, all major regions had a strong 2021, with double-digit returns — except China, which was down 21.6%, as measured by the MSCI China Index. The MSCI China Index was down another 14% over the first quarter of 2022 and recorded a 54% fall from a market peak on Feb. 17, 2021, to the trough on March 15, 2022.1 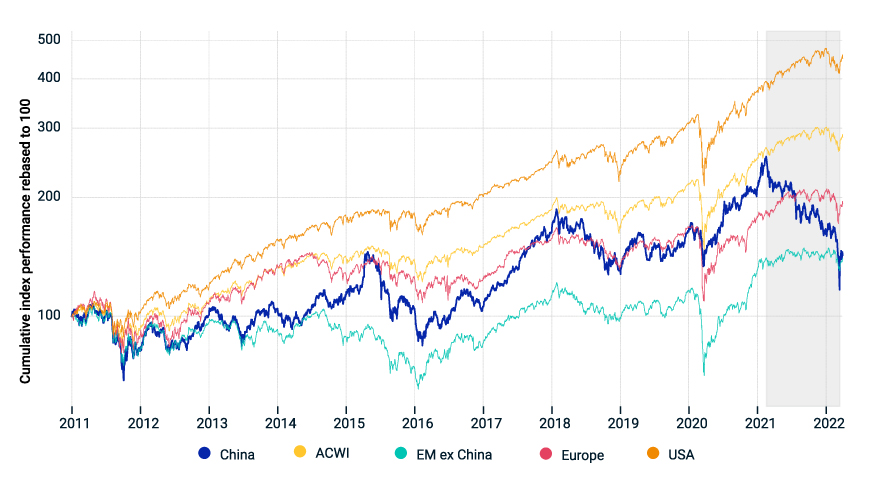 Additionally, the MSCI China Index’s consensus long-term forward-earnings-per-share (EPS) growth rate — which was higher than that of the rest of the world for most of the last decade — dropped significantly since mid-2021. This drop reflected, in part, global investors’ concerns about the long-term growth prospects of China’s listed companies.

What were the main performance drivers?

Global geopolitical tensions following Russia’s invasion of Ukraine, rising inflation and monetary tightening by central banks around the world were among the major concerns that have affected global markets in 2022. In addition to these factors, China’s economy and markets were still left to contend with headwinds in existence since 2021 — such as the U.S. Holding Foreign Companies Accountable Act (HFCAA), which requires companies listed on stock exchanges in the U.S. to declare they are not owned or controlled by a government; and E.O.13959, a U.S. law that bans transactions by U.S. persons in publicly traded securities of companies identified as “Chinese military companies.”

In the exhibit below, we illustrate the nature of all these factors along two dimensions. The horizontal axis shows the extent of the impact on short-term investor sentiment vs. long-term market fundamentals. The vertical axis illustrates the relationship of China’s domestic macro environment vs. the potential risk of China’s decoupling from the west.

To further evaluate these possible drivers of the market sell-off, we examine the MSCI China Index universe.

Relating this performance disparity back to the factors listed above, China’s domestic regulatory changes and delisting risk related to the HFCAA had arguably the most direct impact on the U.S.-listed share class and P chips. Recent performance of these two segments also demonstrated swift changes of investor sentiment in reaction to news.2

Has the situation changed for these performance drivers?

The exhibit below provides a summary of developments related to the major uncertainties hanging over Chinese stocks.

For example, the real estate debt crisis, regulatory changes and HFCAA concerns have been targeted at recent Financial Stability and Development Committee meetings and the National People’s Congress.3 Developments around the latest COVID-19 outbreak in China and the potential macroeconomic effects of the Russia-Ukraine war, on the other hand, may be among the largest concerns still on the table.4

Status of macroeconomic and decoupling concerns

Has negative sentiment transferred to fundamentals?

Compared to global markets, the MSCI China Index’s return on equity (ROE) has not materially deteriorated, either in absolute terms or relative to the market’s valuation level. Since the end of 2020, ROE of China A shares, H shares and red chips increased with the global markets, while their valuations decreased as global valuations rose. Among the different share types in the China universe, overseas-listed companies — given their high exposure to business activities that felt the impact of both domestic regulatory changes and the HFCAA — were apparent outliers in terms of return on equity and price-to-book value.

The bubble sizes for China A, China B, China H, China red chips, China P chips and China overseas represents the share classes’ weight in the MSCI China Index, as of March 31, 2022.

Turning to fund flows, we saw an outflow of USD 9 billion in March 2022, ending 17 consecutive months of positive net inflows, based on the Stock Connect flow through the northbound channel.5 While the absolute amount may seem large, in terms of percentage of outflow, it was not extreme. We saw similar outflows during the early COVID-19 outbreaks in March 2020 (USD 11 billion) and during the U.S.-China trade conflict in May 2019 (USD 8.5 billion).

China’s equity markets have been hit hard by internal and external headwinds. Although markets reacted positively to recent commitments made by the Chinese authorities, investors may wish to watch all the latest developments vigilantly.

2China’s overseas-listed companies slumped 11.4% on March 11, 2022 (the largest single-day drop since 2011), when five companies were named by the U.S. Securities and Exchange Commission for reportedly failing to submit necessary accounting reports under the HFCAA. On March 16, China’s Financial Stability and Development Committee made a strong vow to stabilize the capital markets and addressed some key uncertainties. That same day, overseas-China (U.S.) and P chips had their highest daily return since 2011, surging 28.5% and 21.9%, respectively.

3China held its annual National People’s Congress from March 5 to March 11. Some key economic targets and fiscal plans were unveiled during the meeting, including a GDP growth target, a consumer-price-index target and a near-term economic focus. The Financial Stability and Development Committee held a conference on March 15 and promised to address issues for overseas-listed companies, tighter regulation of the so-called platform-economy companies and issues related to real estate debt — all with the aim to stabilize the economy.

4The newer variants of COVID-19 have led Chinese authorities to place tens of millions of people in lockdown, including residents of the financial and economic center of China. The “dynamic zero-COVID policy” aims to stamp out infections, which contrasts with a global trend toward coexisting with the virus. China’s stand on the Russia-Ukraine war is another concern to global investors. Presidents Biden and Xi spoke on March 18 and exchanged views on the war. Both agreed to seek a resolution through diplomacy, but the war remains one of the largest factors looming over the global and regional economy.

The Impact of China’s New Regulations: A Thematic Lens