The U.S. bull market is now the longest in history, leading the way for strong global equity returns over the 10 years since the financial crisis. What does this mean for valuations? We found that while they are high, they have not reached extreme levels. What’s more, there are distinct valuation characteristics across regions, sectors and factors that may create potential investment opportunities.

SOME, BUT NOT ALL, REGIONS LOOK EXPENSIVE

Strong equity performance has resulted in elevated valuations for the broader markets, but the valuations do not appear extreme when we look at index valuations since 1994.

When we look at where current valuations for each region, as of the end of July 2018, rank within its own history, the U.S. seems overvalued with current valuations in the 64th percentile on a price/earnings basis and the 80th for price/book; emerging markets and Europe remain in the 50s and 40s ranges, respectively. Japan, in contrast, appears relatively undervalued on both valuation measures.

VALUATIONS OF DEVELOPED AND EMERGING MARKETS 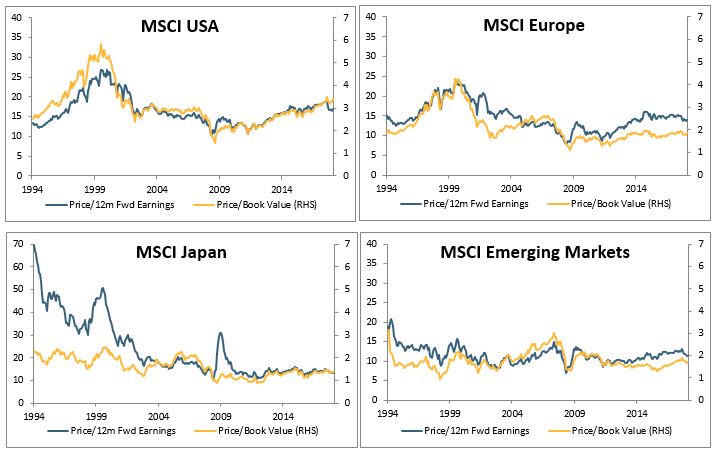 Percentile of the Current Valuations

EXTREME VALUATIONS FOUND IN ONLY A HANDFUL OF SECTORS

In the next exhibit, we show the percentile rank of the current valuations for MSCI World GICS® sector indexes using monthly data since June 1994 (except for real estate where data is available from April 2003) through July 20181. We see a significant disparity across the sector relative valuations. While sectors, such as telecom services and financials are close to their lowest relative earnings/price and book value/price valuations, the information technology, consumer discretionary and industrials sectors are all close to their peak relative valuations on a book value/price basis. Though not indicative of future results, Information Technology significantly outperformed broader market measures over last five years, pushing its weight in developed markets to 20% -- the highest since the Tech bubble when it peaked at 26%.

In emerging markets, consumer staples and consumer discretionary were the most “expensive” sectors while financials and real estate were the “cheapest” in terms of valuation. 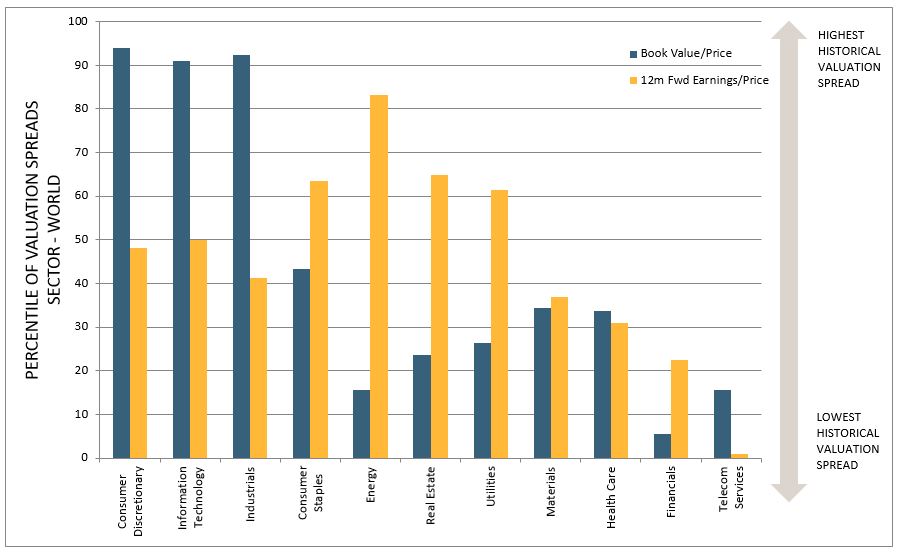 Given investor concerns about the sustainability of global economic growth and heightened geopolitical risks, it’s not surprising that quality has been outperforming; high-quality companies are trading at premium valuations. The MSCI World Momentum Index is currently overweight in relatively expensive sectors, such as information technology and consumer discretionary and priced close to its peak relative valuations. Momentum’s high valuations can be attributed to recent outperformance, as well as to the nature of the factor itself. That is, it can swing rather sharply as it follows outperforming stocks and sectors. For example, the MSCI World Momentum Index was cheaply valued as late as November 2017. We saw a similar distinction in factor valuations in emerging markets, but the difference in relative valuations for the cyclical and defensive factors was not as wide.

PERCENTILE OF CURRENT RELATIVE VALUATIONS OF FACTORS IN DEVELOPED MARKETS 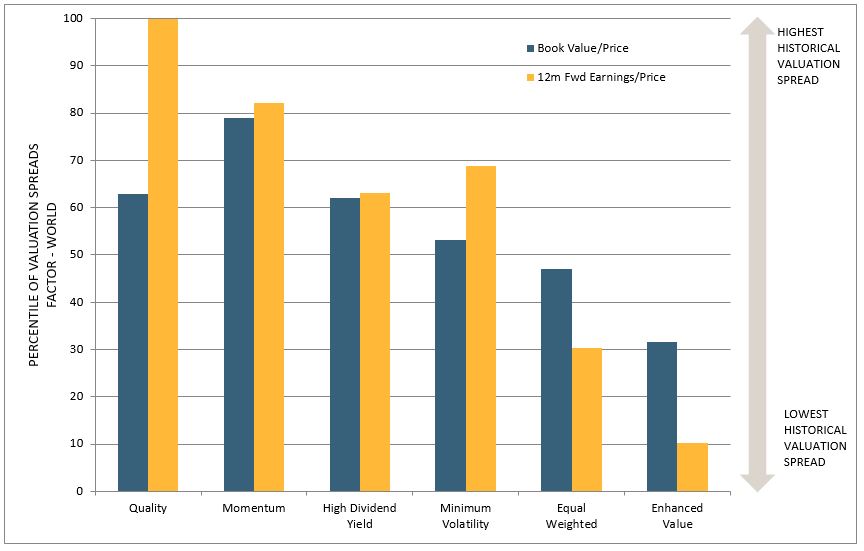 To conclude, market valuations across the globe are high, but have still not reached nosebleed territory on a historical basis. Within the broader equity markets, we saw a significant dispersion in valuations, likely offering investors cheaper investment themes across different regions, sectors and factors.

The author thanks Jean-Maurice Ladure for his contribution to this post.

Are market valuations in nosebleed territory?