Volatility of both emerging and developed market debt credit spreads increased significantly in 2018. While transaction costs, overall, remained stable throughout the year, large rises in credit spread levels were followed by increased bid-ask spreads, making it expensive to reduce exposure within a particularly short time-frame. Timing of trades by as little as a couple of days had significant impacts on trading costs because of decreased liquidity.

From the CBOE Volatility Index (VIX) jump in February and the Italian debt crisis in May, to the worries in emerging markets in August (led by Turkey) and the significant October market sell-off in developed markets, 2018 was a challenging year for investors, globally. To make matters worse, equity, corporate bond and U.S. Treasury prices started to fall in tandem, breaking down the historic bond-equity hedging relationship that has been relatively stable since 2002.1 It is not surprising, then, that according to a recent client survey by Bank of America Merrill Lynch, vanishing liquidity climbed to the top of the list of fears for credit investors.

Correlation of credit spreads and bid-ask spreads: a snapshot

We compare average and turmoil correlation between credit spread and bid-ask spread moves in three different markets. Long-time averages are calculated based on daily returns throughout 2018. Turmoil correlation is measured in May for Italy and in August for Turkey.

The exhibit above shows the changes in liquidity during specific periods of market shocks by measuring the correlation between changes in credit spreads and bid-ask spreads – one of the most readily available and observable liquidity measures. During relatively stable periods (“Calm”), the long-term average correlation was close to zero, suggesting there was no clear connection between a fall in bond prices and investors’ ability to sell. In more volatile market environments (“Crisis”), however, the correlation increased dramatically. This time-varying correlation below, in turn, suggested a non-linear relationship between the two measures.

Should you trade bonds in a crisis? 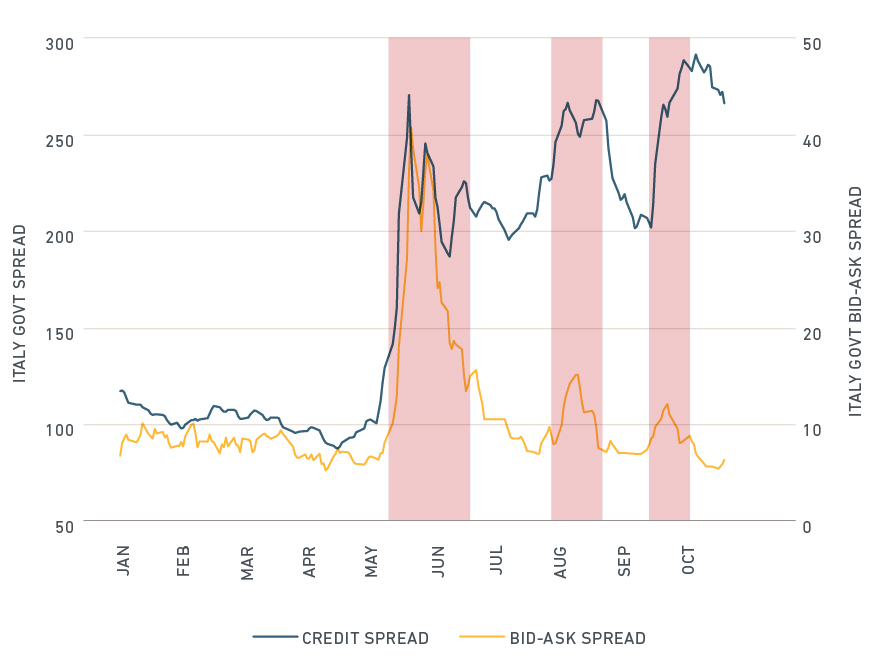 A time-series view of the two measures gives further insight into the potential credit and liquidity relationship from January to October 2018. The chart above shows how bid-ask spreads jumped more than 500% for Italian government bonds in May, triggered by a 250% jump in credit spreads. In June, credit spreads stabilized but remained high, while bid-ask spreads reverted to their original level. We observed two smaller bid-ask jumps in August and early October, which, again, were followed by reversion to the long-term average. Investors who were not compelled to reduce their exposure immediately (due to leverage constraints or margin calls) may have avoided a significant part of any potential increased trading costs by delaying their trades.

Market impact during a crisis: the Italian example

Using the MSCI LiquidityMetrics model, we made further investigations and assessed how market impact2 changed through the same time-period. The picture, seen above, was similar and showed that selling a large amount resulted in a double-penalty outcome during the crisis periods: sellers not only had to pay a much larger bid-ask spread, but their large trades pushed the price down more than six times faster than in the calmer months at the beginning of the year.

Our research suggests that investors’ worries about increased transaction costs in major credit shocks were justified. However, the liquidity shocks tended to be shorter than the credit shocks, and liquidity fell back to long-term levels relatively quickly. While delaying trading decisions is not always possible or appropriate, it may have been worth considering in these examples.

1 Is the bond-equity hedge slipping away?

2 Market impact is a key parameter of the MSCI LiquidityMetrics model measuring the sensitivity of the transaction cost to trading size. It is expressed in basis points (bps) per EUR million notional traded.

Is the bond-equity hedge slipping away?

As credit risk rises, beware of selection bias in CLOs