Maintaining a “home bias” in the equity portfolio may come with huge opportunity costs.

In a 2012 study MSCI prepared for Norway’s Ministry of Finance, we examined:

We found that over the past few decades, globalization of economic activity and increased integration of capital markets have led to a dramatic expansion of the equity universe for international investors. Institutional investors were able to access a deeper and broader global equity opportunity set. As a result, the “home bias” of some of the world’s largest portfolios declined dramatically since the mid-1990s, though it still exists in some countries. 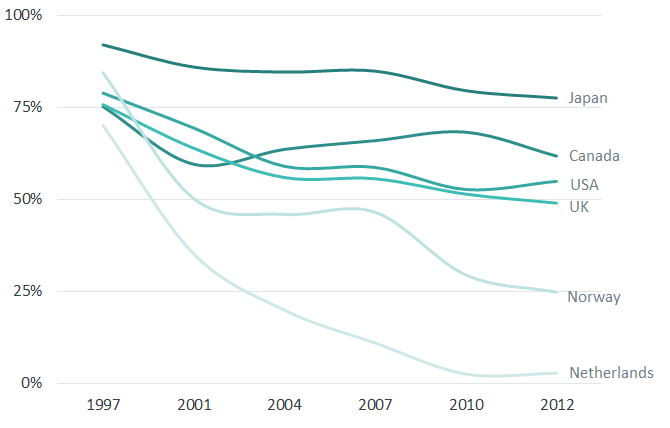 When MSCI started calculating indexes in 1970, the global equity universe consisted of just 16 developed markets. In the 1980s, the launch of the MSCI Emerging Markets Index expanded the list to 35 countries. Frontier Markets and smaller companies subsequently were added, increasing the breadth and depth of the global opportunity set.  The increasingly global nature of business and increased integration of financial markets have led to a marked convergence among regional equity markets, pushing investors toward an integrated global approach. Maintaining a home bias may come with potentially huge opportunity costs.

Since MSCI introduced its Emerging Markets Index in 1988, the weight of emerging markets in the MSCI ACWI Index has grown from less than 1% to more than 10% at the end of 2014 (see exhibit below). That figure would have been close to 30% if emerging markets were weighted by their economic weight instead of their market weight. In addition, as economies mature, their levels of GDP per capita tend to rise and domestic companies turn increasingly to stock markets to finance their expansion, thus boosting the presence of emerging markets in the MSCI ACWI Index. The risk, of course, is that the globalization trend may reverse.

This growth in emerging markets has led to a radical change in the opportunity set available to international investors. In today’s equity universe, investors have the potential to tap into the world’s regions with the strongest growth, often while adding stocks with lower correlations to equity performance in their home markets. The main long-term risk is that the globalization trend may reverse, particularly in the short term. In addition, some investors worry about higher levels of volatility. 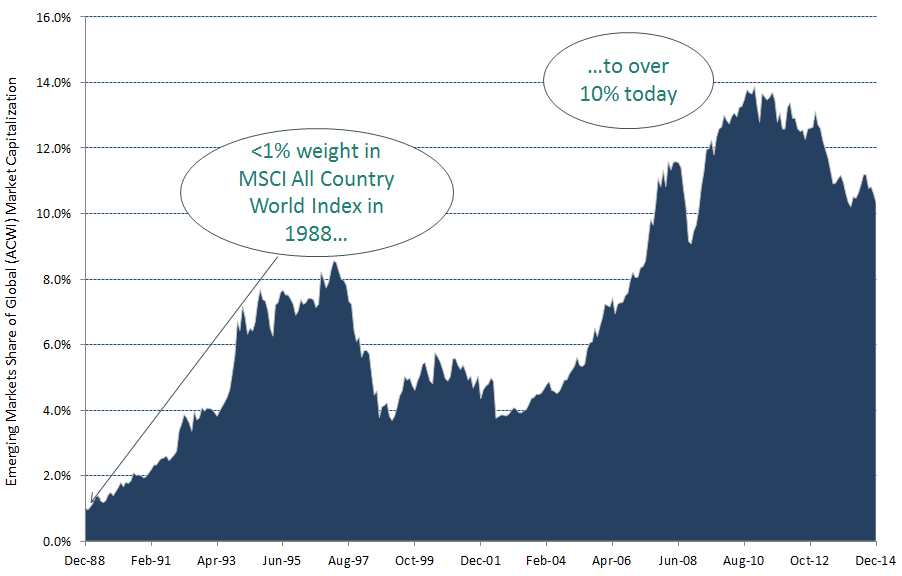