Market movements in the first three months of the year reflected wide gyrations in investors’ assumptions about macroeconomic conditions and asset pricing. Investors in aggregate went from anticipating improvements in U.S. growth and inflation at the end of 2015 and the start of a cycle of tightening by the U.S. Federal Reserve that strengthened the dollar, to worrying about a global recession in which central banks and debt-laden governments are left with little room to maneuver.

Markets ended the quarter roughly where they began three months earlier. Does that mean we are back to the same set of assumptions? The central scenario has evolved to one in which investors expect economies to muddle through global uncertainty but with heightened worries about the effectiveness of monetary and fiscal policies, especially in case of further slowdown.

Our latest report outlines some adverse and positive scenarios and their implications for multi-asset class portfolios. 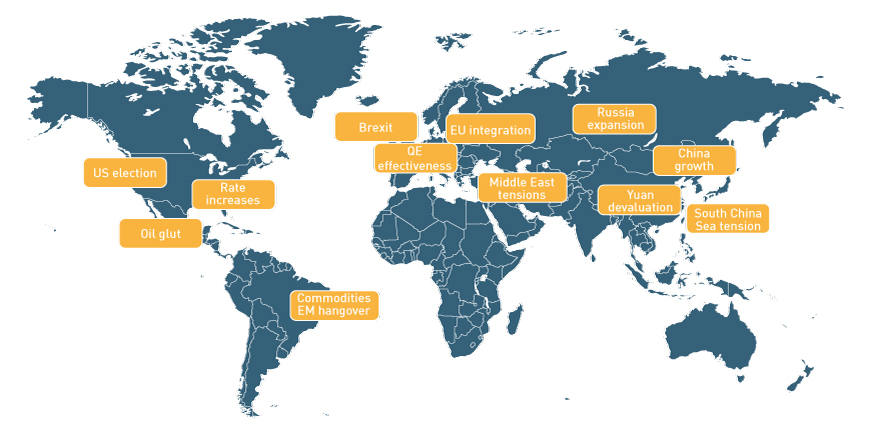 In macro terms, the scenario reflects a continuation of slow growth and low inflation, as well as a shortage of safe assets that has characterized the global economy since the 2008 financial crisis. In this context, adverse and positive scenarios for the year thus far generally will be articulated around:

The slowness of growth rates across the globe translate to lower growth in cash flows and a stepdown over the long term in returns to equities. Slowing economic growth also lowers bond yields as investors demand insurance in the form of nominal and inflation-linked Treasurys.

In response to concerns about the prospects for their economies and a chronic shortage of safe assets, central banks in Europe and Japan have pushed short-term interest rates below zero, while the Fed has delayed additional interest-rate hikes. Excessive monetary easing could present a concern. Rates that remain low may increase financial instability by narrowing profits at banks and sending institutional investors on a search for yield that may entail more risk, induce a surge in inflation expectations with adverse consequences for growth, and diminish the ability of policymakers to counter a further slowdown.

An oversupply of oil could add to systemic risk by straining balance sheets at banks that face a wave of defaults from energy companies. A decision by the U.K. to leave the European Union could set back growth in the U.K. and across Europe and stress the rest of the world. Disappointing economic activity worldwide, as well as low productivity and wages, all could combine to increase job insecurity, mistrust in governments and populist sentiment.

The full economic benefits of lower oil prices have yet to materialize. Consumers in the U.S. and other developed markets have saved the windfall instead of spending it. If oil prices were to stabilize around or above current levels and the stresses on banks ease, a pickup in spending by consumers could help to boost growth globally.

Unconventional monetary or fiscal policies could revive lending, borrowing and risk-taking in a sustainable fashion. In turn, political leaders around the world could focus on reforms that support growth and productivity in the long term instead of responding incrementally to rising populist sentiment.