A remarkable calm has settled upon the U.S. bond market, with interest rate and inflation risk now at their lowest levels of the decade. This optimistic sentiment was underscored at the annual Jackson Hole, Wyoming conference where Federal Reserve (Fed) Chairman Powell highlighted that there is “…no clear sign of an acceleration (of inflation) above 2% and there does not seem to be an elevated risk of overheating.”1

While the data suggests there is good reason over the short term for the Chairman’s optimism and the market’s relative calm, longer term economic and policy uncertainty clouds the inflation picture. Despite the Fed’s best of intentions and the bond market’s supreme confidence in the Fed’s ability to maintain inflation around 2%, investors may be downplaying the possibility of future volatility.

VOLATILITY OF INTEREST RATES AND INFLATION HAS DECLINED OVER THE DECADE

To get a better perspective on the situation, we used the MSCI Integrated Model to analyze interest rate and inflation volatility from January 2010 to August 2018.2 As we can see in the exhibit below, over this period, the 10-year nominal yield volatility has fallen to 48 basis points (bps) per year from a level of 114 bps. Ten-year inflation volatility has declined even more, standing now at only 22 bps per year.

We attribute higher volatility earlier in the decade to significant market uncertainty over the course of inflation and economic growth. Starting in Q1 2010 and extending to Q4 2015, bond market inflation expectations consistently exceeded realized inflation as investors repeatedly misjudged the impact of the Fed’s quantitative easing programs on prices.3

Inflation expectations and reality have converged 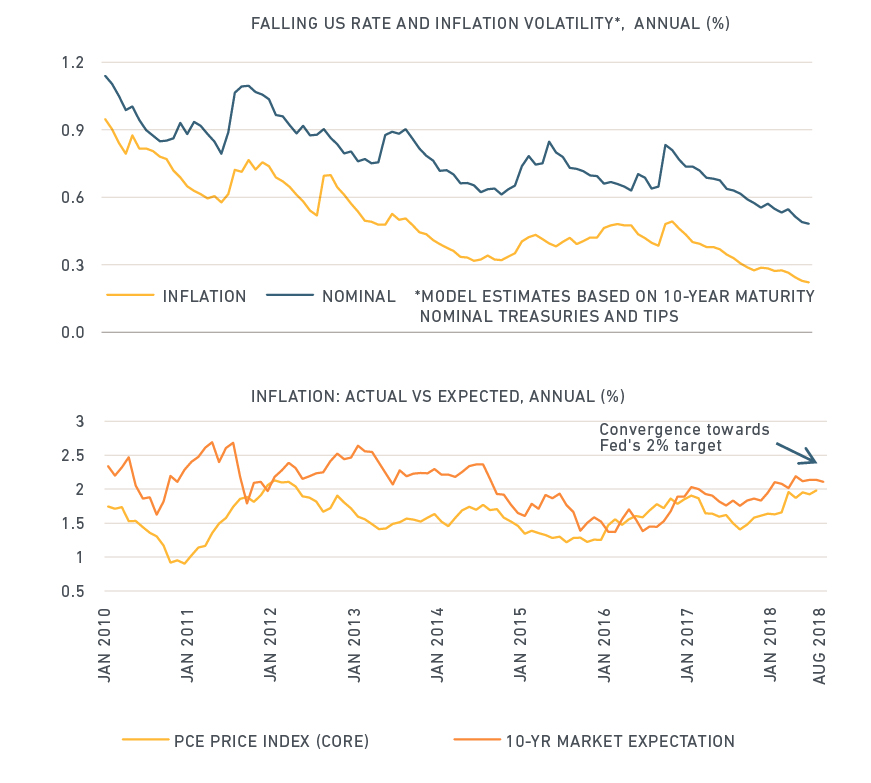 Since Q1 2016, realized and expected inflation have closely tracked each other and have recently converged to the Fed’s 2% inflation target. We believe this alignment of expected and realized inflation is an important cause of the decline in rate and inflation volatility.

Another factor behind the shift in volatility is gross domestic product (GDP) growth, which has been rock solid and generally increasing over the past several years.4 This stands in stark contrast to the uneven growth experienced during the first half of the decade. Stability in macroeconomic conditions has allowed the Fed to be more vigilant in focusing on its inflation target.

U.S. GDP has stabilized over time

A VICTORY LAP FOR THE FED, BUT WHAT ABOUT THE FUTURE?

Chairman Powell can rightfully be happy with the current favorable economic environment. The market’s long-run inflation expectations are anchored to the Fed’s target rate, and the Fed’s credibility with the market appears strong.

But, as we’ve seen from our analysis, a lot can change over 10 years. Inflation has increased over the past year and, while this rise has been a welcome one, it is too early to know if inflation has plateaued. Additionally, important macroeconomic and policy unknowns remain.

Perhaps most importantly, it is very difficult to project with confidence longer term economic growth. Scenarios with weaker growth may result in soaring budget deficits, which may severely test the Fed’s resolve to remain firm on inflation. In addition, the Fed’s exit from its quantitative easing programs, while currently running smoothly, may still result in future market surprises. In the face of this uncertainty, investors may want to consider whether the market is a bit too complacent and understating the potential for future interest rate and inflation volatility

The author thanks Juan Sampieri and Aniko Maraz for their contributions to this post.

1 Powell, J.H. “Monetary Policy in a Changing Economy.” A symposium sponsored by the Federal Reserve Bank of Kansas City. Aug. 24, 2018.

2 Our model volatility estimates are calibrated to 10-year maturity U.S. Treasury (nominal) and Inflation Protected Securities (TIPS). The data is updated through Aug. 24, 2018.

3 Market-expected inflation is based on yield differences between 10-year nominal Treasuries and TIPS. The data is updated through Aug. 30, 2018. Realized inflation is derived from the price index for Personal Consumption Expenditures, as reported by the US Bureau of Economic Analysis, and is last updated as of July 2018.

4 GDP is from the US Bureau of Economic Analysis and is last updated as of Q2 2018.

Bonds and equities: still happy together?