The shrinking cost of currency hedging

The shrinking cost of currency hedging

The cost of hedging exposure to foreign currencies is coming down for some investors. Though hedging can help investors avoid losing money amid swings in the foreign-exchange market, the strategy can be an expensive one for investors based in countries with structurally low interest rates. But that is changing as a result of monetary policies in major economies.

Japan, which for two decades had interest rates that were much lower than those in the rest of the world, illustrates this phenomenon. During the decade that preceded the financial crisis, fully hedging the MSCI Kokusai Index (which is composed of developed markets equities, excluding Japan) in yen could have reduced volatility by 3.2 percentage points but also lowered returns by 2.6 percentage points, as the table below shows.

That’s a hefty cost for reducing volatility. But since the financial crisis, the drag on returns has disappeared while risk has declined by nearly a third. What explains these differences?

Source: MSCI Research. Return and volatility calculations are based on gross total returns of MSCI Hedged Indexes from December 1997 to May 2016.

A currency hedging operation has two effects on a portfolio. One, the spot effect, removes spot foreign exchange rate exposure from an investor’s home currency. The second, the carry effect, swaps a foreign interest rate into a domestic interest rate when compounding total returns.

The chart below shows the relative performances of the MSCI Kokusai hedged index against the non-hedged index. A yen-based investor who hedged their foreign currency exposures prior to the financial crisis would have underperformed those who didn’t hedge because of the carry cost, which was estimated at 3.9% per year.

Since the crisis, this carry impact has become negligible as global interest rates have converged. As shown in the chart below, differences in yields between foreign currencies and the yen have narrowed to their lowest in 20 years.

Foreign-exchange carry against the yen 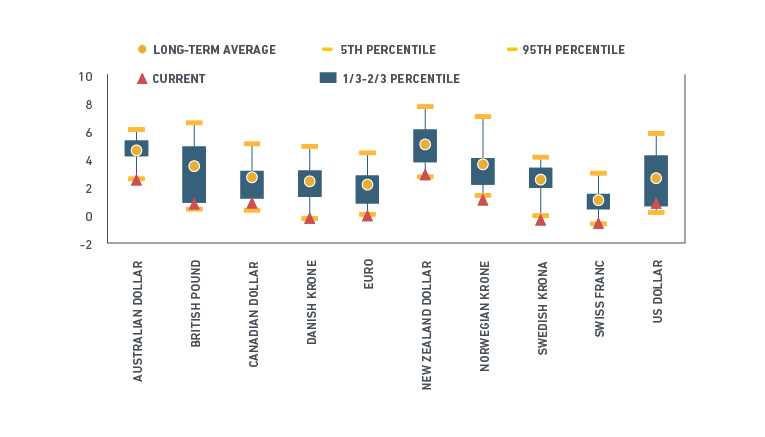 With yields converging, the carry cost for yen-based investors has disappeared for most currency pairs, while currency volatility has increased sharply. Though Japanese investors may decide to revisit their currency-hedging decisions, the analysis also holds for investors whose home countries have had structurally low interest rates historically.

Should you hedge your foreign exposure?