A growing body of research shows that having three women on a corporate board represents a “tipping point” in terms of influence, which is reflected in financial performance. Our analysis from last year looked at a snapshot of global companies in 2015 with strong female leadership, finding that they enjoyed a Return on Equity of 10.1% per year versus 7.4% for those without such leadership.

This year, we analyzed U.S. companies over a five-year period (2011-2016). U.S. companies that began the period with at least three women on the board experienced median gains in Return on Equity (ROE) of 10 percentage points and Earnings Per Share (EPS) of 37%. In contrast, companies that began the period with no female directors experienced median changes of -1 percentage point in ROE and -8% in EPS over the study period (see below exhibits).

Five-Year Earnings Per Share (EPS) by Number of Women Directors 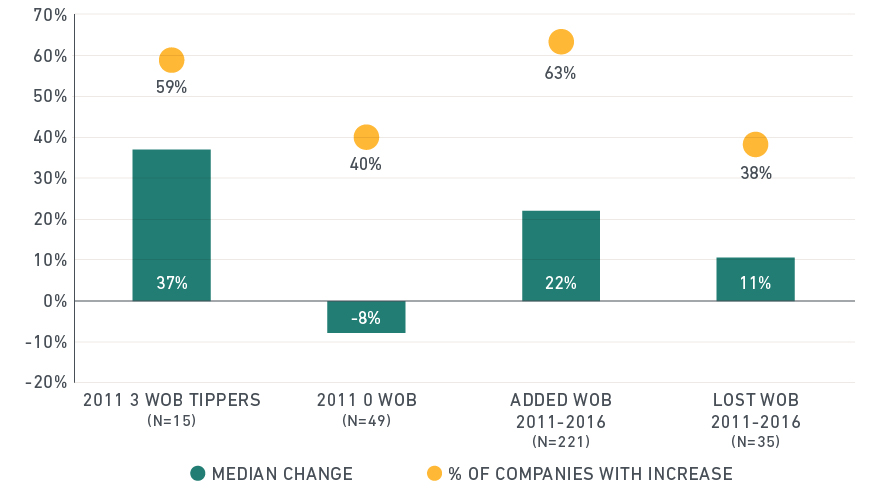 Five-Year Return on Equity (ROE) by Number of Women Directors 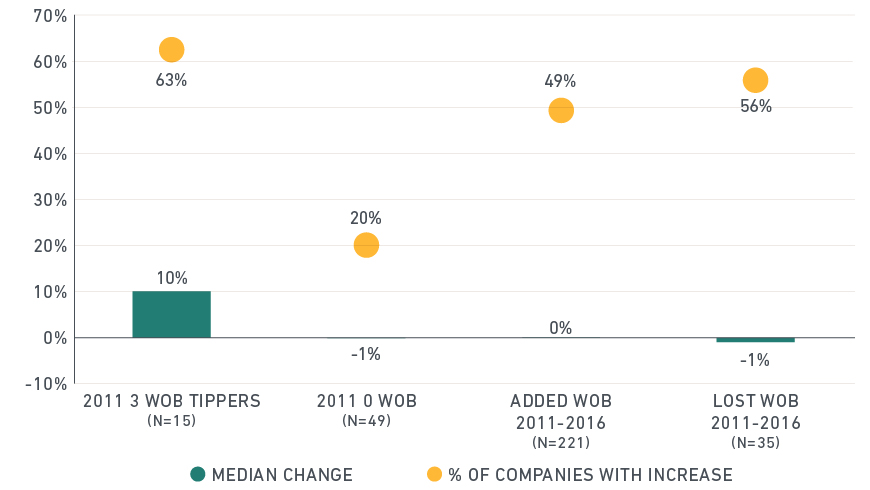 Such superior performance from companies with at least three female board members may derive from better decision-making by a more diverse group of directors, as some studies hypothesize. But outperformance may also be tied to greater gender diversity among senior leadership and the rest of the workforce, which has been correlated with reduced turnover and higher employee engagement.

Globally, we found that large multinational companies that had a critical mass of female directors tended to have more gender-diverse leadership teams and were more likely to have a female CEO. We also found that such companies were more effectively tapping available female talent supplies throughout the organization. Thus, the presence of at least three women directors may be seen as a doubly positive indicator: of a better-performing company and of a more functional organization overall.  In short, having more women directors may lead to a virtuous cycle.

The author thanks Meggin Thwing Eastman, Damion Rallis and Gaia Mazzuchelli for their contributions to this post.

Women on Boards at MSCI:

In the photo accompanying this blog, the women shown are (from left to right):