Emerging-market equities revived in the first quarter after a rather dismal performance over the past five years. The pickup has left investors to wonder whether the gains might continue and to think anew about how to approach the segment.

A pickup in the performance of emerging markets

Economic development and the interconnectedness of financial markets have redefined the characteristics of emerging markets to such an extent that emerging markets now represent engines of global growth.

As the charts that follow show, emerging markets have contributed a growing share of gross domestic product worldwide and seem likely to add more than developing countries to growth globally for some time to come.

Digging more deeply into the recent rebound, through April 8 of this year, emerging market equities continued to diverge among one another in their performance as they have for at least the past decade. For example, stocks in Greece and Egypt lost 16% and 3%, respectively, over the period, while shares in Russia (16.3%), South Africa (10.6%) and Turkey (19.8%) all gained (see chart below).

The divergence among returns in emerging economies reflects the variation among those economies and has led some investors to adopt strategies that aim to capitalize on the heterogeneity. Such strategies suppose that because some countries seem likely to grow faster than others, it makes sense to try and pick winners.

The incentive to pick countries also corresponds with the evolution of investment mandates and the array of ways to address them. Still, in our view a broad-based portfolio, as reflected in the MSCI Emerging Markets Index, offers several advantages. 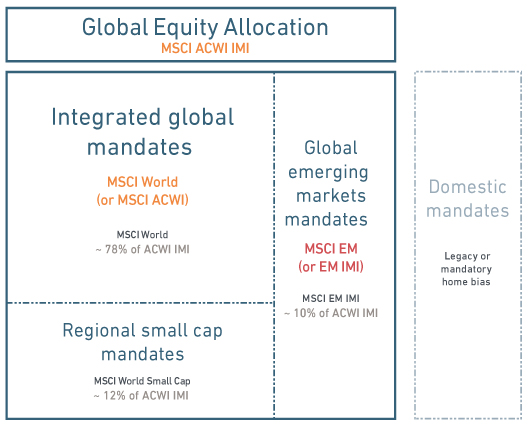 As noted, emerging markets are inherently dynamic, as is the notion of investing in them broadly. Second, as shown above, the default emerging markets allocation for asset owners remains a mandate benchmarked to a broad-based emerging markets index. Third, an emerging markets composite index can capture diversified returns across multiple countries without adding additional risk, at least historically (see chart below). Side note: The minimum volatility version of the MSCI Emerging Markets Index has outperformed its parent by nearly 6% over the five years ending March 31. Finally, broad investable benchmarks provide more opportunities for active managers to pick the best stocks as well as more opportunity to manage country exposures. 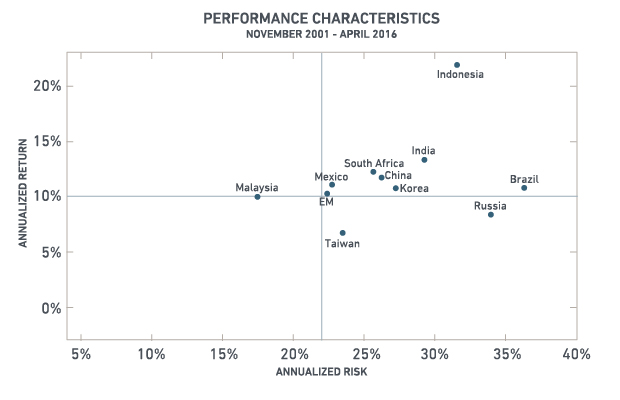 The evolution of mandates provides institutional investors with more choices – and challenges – in structuring their allocations to emerging markets. We believe that approaches to investing in emerging markets will continue to be influenced by the dynamic nature of such markets themselves. Their performance so far this year has showed that a broad-based approach remained as relevant as ever.

China A-Shares: Too Big to Ignore