Why are Small Caps Different?

Why are Small Caps Different?

A lot has been written about the persistence of the global small-cap premium. But what, apart from size, distinguishes small-cap stocks from their large- and mid-cap counterparts, and how can these distinctions help institutional investors? In this blog post, we see that small caps are quite distinct from large- and mid-cap stocks when we look at 1) correlations, 2) sector tilts, 3) factor tilts and 4) foreign revenue exposure and thus may offer significant diversification benefits when added to a global equity portfolio.

1) Correlation: In an environment where asset classes have become increasingly correlated, small caps have helped diversify portfolios. As shown below, while correlations between the MSCI USA and World ex USA indexes (which include large- and mid-cap stocks) remained relatively high (dark blue line), adding global small-cap stocks to the mix has would have lowered the correlation.

For example, adding developed-market small-cap stocks to the MSCI USA Index would have resulted in lower correlations (yellow line). Combining the MSCI USA Index with emerging markets small-cap stocks would have dropped the correlation even further, to about 60% as of June (red line). These lower correlations can be especially important as investors increase their allocation to global small caps. 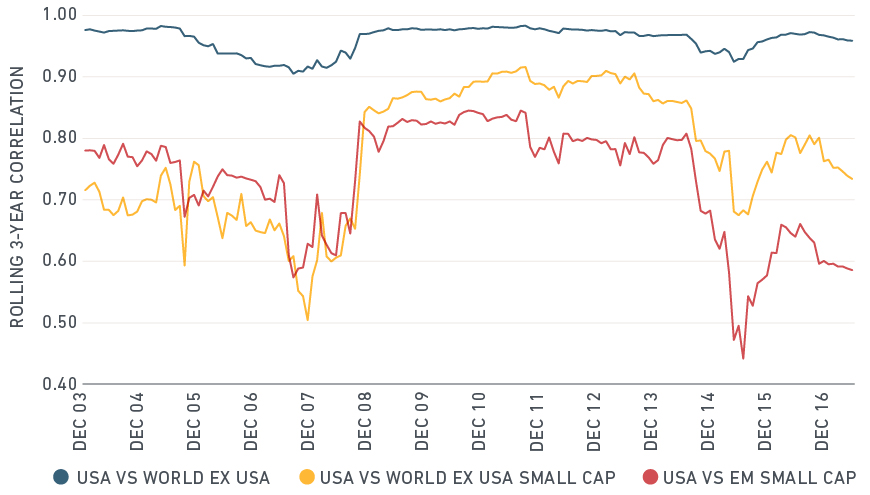 Correlations based on monthly returns from January 2001 to June 2017

2) Sector tilts: In general, small caps have smaller economies of scale than larger firms. We analyzed small-cap indexes using GICS® sectors1 and found they are light on energy, telecom and consumer staples stocks, which require a large capital base more characteristic of large- and mid-cap companies.

Small caps also behaved differently from their large- and mid-cap counterparts in business cycles. This is partly because small caps generally lean toward cyclical sectors such as industrials, materials, real estate and consumer discretionary stocks. They are less focused on defensive sectors such as telecom, health care, consumer staples and energy. However, while small-cap stocks are becoming more global, there are still important distinctions among small caps in different regions.

3) Factor Tilts: Small caps naturally tilt heavily toward the low size factor, the primary distinction between small caps and their large- and mid-cap counterparts with respect to factors. However, there are other factor tilts in small cap-portfolios that set them apart from larger companies. Using the GEMLT factor model (see exhibit below), we see that small caps tended to have a value bias, largely by virtue of their positive tilt toward book-to-price. Small caps have also higher earnings variability, suggesting they have lower exposure to the quality factor than large caps. And small caps have negative exposure to the dividend yield factor, given that they tend to pay lower dividends than larger companies. Understanding these factor tilts may help investors as they look to make small-cap and factor-based investment decisions in parallel.

Based on GEMLT average active factor exposures from Dec. 1998 to June 2017

Based on MSCI Economic Exposure Indexes data as of June 30, 2017

How to think bigger about small cap investing