Peter Zangari
With thanks to Andy Sparks, Gabor Fabian, and Gabor Almasi for the contribution

The U.S. Treasury Dept. decided this week to effectively block payments to holders of two USD Russian sovereign bonds.1 These payments had been initiated by the Russian Ministry of Finance, but would have required the Russian government to access its reserves held at U.S. banks. Market reaction was swift, with prices of Russian bonds falling significantly. This development followed two weeks of relative calm, when Russia successfully made payments on USD bonds and those bonds’ prices generally rose.

Probabilities of Russian default implied by credit-default swaps , which we’ve been tracking closely, are at their highest levels since the invasion. The default probability is 90% over a one-year horizon and 94% over a five-year horizon. Russia has now entered a 30-day grace period in which it might be able to avoid default if it finds another source of funds for the payments. Barring this, Russia will be heading toward its first default on hard-currency debt since the one triggered by the 1917 Bolshevik Revolution.

Does the fallback clause matter?

Some investors remain focused on provisions included in newer Russian sovereign bonds. The hard-currency bonds issued since 2018 include a ruble-fallback clause, which allows payments on bonds to be made in rubles if, “for reasons beyond its control,” Russia is unable to make payments in hard currency. The two pre-2018 bonds with missed payments this week did not provide Russia with this option.

Since the invasion, the newer bonds have generally experienced larger losses, suggesting investors have so far placed greater value on the older bonds. This may be a result of many bondholders having preferred to be paid back in dollars and euros, rather than in hard-to-use rubles. This week’s missed payments on the older bonds may cast doubt on the benefit of the no-fallback clause.

Probability of default on 1Y and 5Y horizon, inferred from CDS spreads 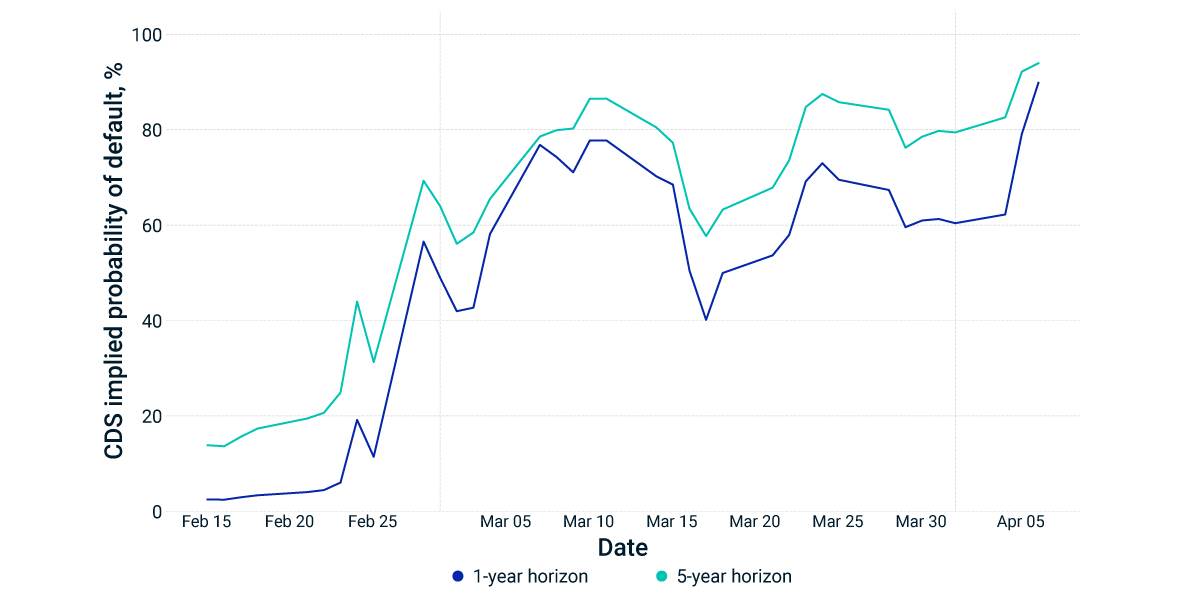