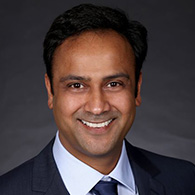 Jigar Thakkar has served as Chief Technology Officer and Head of Engineering since July 2018. In this role, he is responsible for overseeing the company’s engineering technology services, development and data science operations. He is also a member of MSCI’s Executive Committee.

Prior to joining MSCI, he served as Corporate Vice President at Microsoft from 2017 to 2018, leading software engineering for Microsoft Teams and Skype for Business. Prior to that, he served as a Partner Director of Engineering from 2012 to 2017. During his 19-year tenure at Microsoft, he built large-scale products and served in various leadership positions within the Office 365, Dynamics CRM, Bing, Windows and MSN divisions.

Technological advancements are leading us into the future state of the financial industry and the infusion of technology is becoming central to the success of investment firms.