Investors and the media have lately turned their attention to credit risk in U.S. subprime automotive lending — concerns that increased during the recent market volatility.1 Based on MSCI’s new U.S. auto-loan model, under current conditions, we think monthly default rates (MDR) are likely to stay flat in the near term and potentially even decrease if used-vehicle prices rise.

Since the global financial crisis, subprime consumer and mortgage lending and securitization have been subject to greatly increased regulation, which has decreased activity in these areas — with some notable exceptions: Subprime and deep-subprime auto-loan issuance and securitization have bounced back and lately exceeded pre-crisis levels.2 During 2018, issuance of subprime auto asset-backed securities (ABS) reached about USD 33 billion and represented roughly 41% of total U.S. auto ABS issuance (vs. USD 27 billion and 35% of total issuance in 2006). 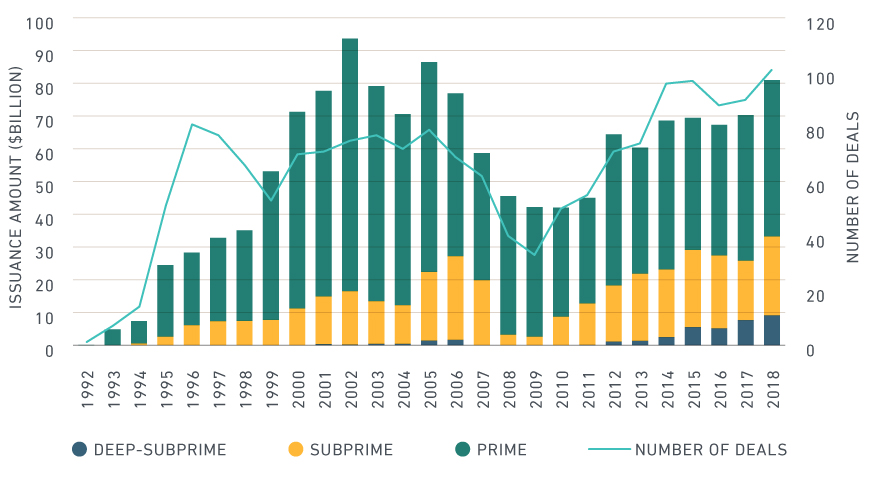 Overall default rates for subprime auto ABS climbed between 2011 and 2018. The 2015 vintage’s default rates approached the peak levels of the financial crisis. Loosened underwriting standards were likely a key contributor to this drop in performance. Despite the increased issuance of deep-subprime auto loans in recent years, banks’ auto-loan credit standards tightened in 2016, according to a survey by the Federal Reserve Bank of St. Louis.3 And historically, changes in banks’ underwriting standards have appeared to be a good indicator of credit quality of auto-loan ABS (issued during the period) and to drive the default rates of subprime auto-loan ABS, as we can see in the exhibit below.

CREDIT STANDARDS AND DEFAULT TRENDS IN US AUTO LENDING 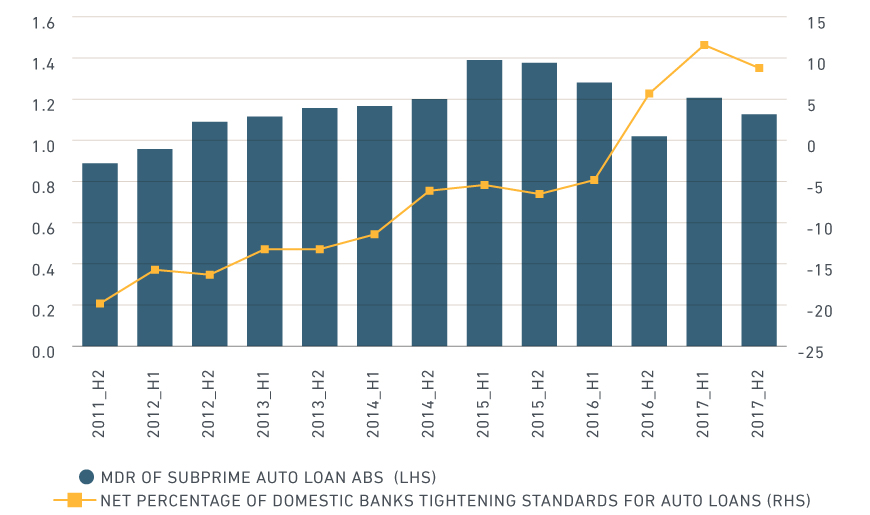 The MDR represents the average default rate of loans with age between 12 and 36 months. Source: Federal Reserve Bank of St. Louis, INTEX, MSCI

Several market dynamics have appeared to influence the level of delinquencies and defaults in subprime auto loans.4 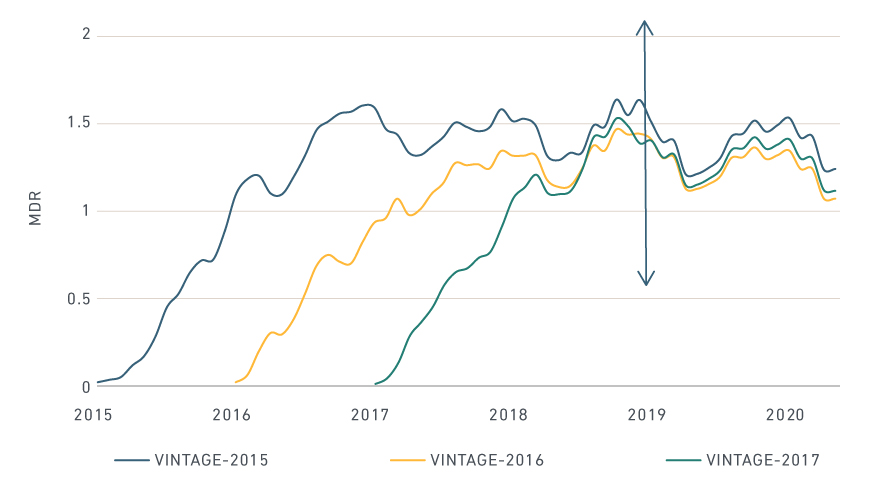 Because underwriting standards improved in 2016, our model projects post-2016 vintages will experience about a 0.2 improvement in MDR levels versus the 2015 vintage, assuming used-car prices stay at the current level. The 2015 and prior vintages’ performance could start to improve as a result of amortization and weaker borrowers’ departure from the cohorts. Subprime auto loans could prove stable, especially if used-car prices increase, according to our model. However, if originators loosen underwriting standards — for example, to compete for market share — subprime-loan performance could deteriorate again.

2 Subprime auto borrowers usually have a credit score below 620, while deep-subprime borrowers’ credit scores come in at or below 550.

Credit binge hangovers have historically been a challenge

Managing MBS risk in a rising rate environment (Part I)