Are You Ready for Uniform MBS? (Part 2)

Are You Ready for Uniform MBS? (Part 2)

Aligning prepayment speeds of Fannie Mae and Freddie Mac securities presents a major challenge to the success of uniform mortgage-backed securities (UMBS), which the two government-sponsored enterprises will launch on June 3.1 Historical analysis shows that relatively small prepayment differences could cause large pricing differentials between the two agencies’ securities. The current rule2 by the Federal Housing Finance Agency (FHFA) regarding this concern may not be adequate to ensure the success of UMBS.

As is commonly observed, MBS with faster prepayment speeds are penalized by the market and have been a fundamental cause of liquidity issues in the Freddie Mac to-be-announced (TBA) market. The potential speed divergence between Fannie Mae and Freddie Mac securities may lead to two consequences:

Either consequence could present problems for the UMBS effort — and even pose risks to U.S. housing finance. To address this concern, the FHFA has issued specific rules defining prepayment-speed “misalignment” and “material misalignment,” measured in conditional prepayment rates (CPR).

THE STORY OVER THE PAST TWO DECADES

We analyzed nearly two decades of prepayment data and looked closely at the most prevalent cohorts — i.e., all loans aggregated with a particular coupon and vintage, excluding those held by the Federal Reserve or locked up in collateralized mortgage obligations (CMOs) — revealing the evolution of market pricing with respect to changes in prepayment behavior. 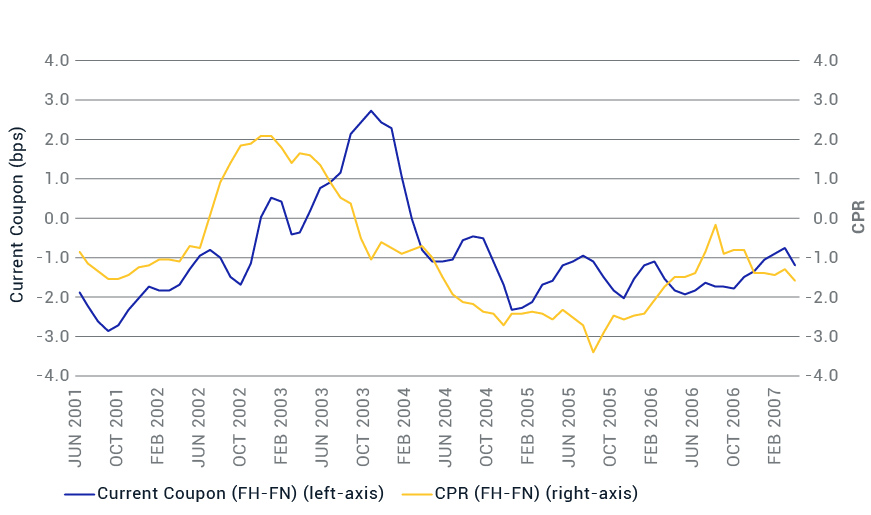 The exhibit above shows the differences between Fannie Mae’s and Freddie Mac’s securities, in terms of current coupon yield and CPR. A higher current coupon yield3 means a lower price. Before the global financial crisis, the extraordinary refinance waves at times exceeded 70% CPR in 2002 and 2003. Freddie Mac’s 2001-vintage security experienced a mere 2%-CPR faster prepayment speed than Fannie Mae’s comparable MBS, but Freddie Mac’s performance suffered by almost 3 basis points (bps), after a delay. After 2003, however, Fannie Mae’s comparable MBS started to experience faster prepayment (due to looser standards for cash-out refinancing, among other things), which later led to almost 2 bps in better pricing for the Freddie Mac MBS.

PREPAYMENT DIFFERENCE IN SYNC WITH MARKET PRICING AFTER FINANCIAL CRISIS 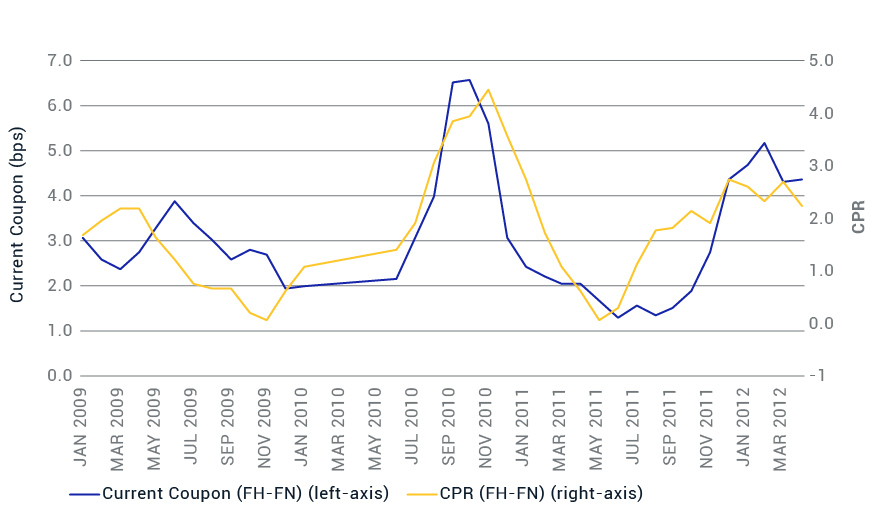 After the financial crisis, there was a relatively large prepayment divergence in 2010. The Freddie Mac MBS traded more than 6 bps lower relative to the comparable Fannie Mae security, in sync with the 3%-CPR prepayment differential.

MARKET PRICING NOT DRIVEN BY ACTUAL PREPAYMENT DIFFERENCE (LEFT), BUT BY FEAR OF WHAT MIGHT HAPPEN (RIGHT), SINCE 2012 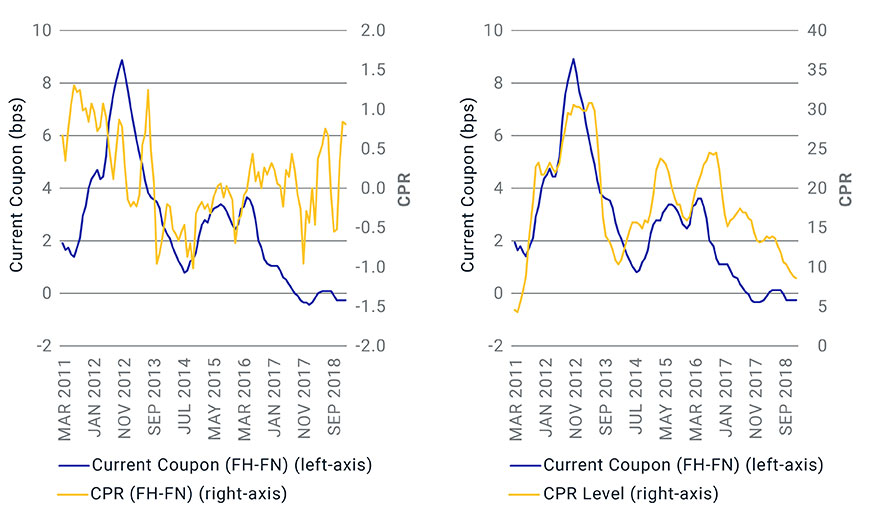 Since 2012, the relationship between prepayment difference and pricing difference seems to have disappeared. Instead, the relative pricing between the two agencies’ MBS has likely been driven by fears of refinancing by borrowers. As soon as refinancing levels picked up with the rates rally of 2016, the market immediately started to price Freddie Mac MBS as much as 8 bps lower relative to Fannie Mae MBS, ignoring the actual prepayment difference, as the above exhibit’s underlying data shows.

PREPAYMENT SPEEDS HAVE CONVERGED, LIKELY DUE TO HIGHER RATES IN RECENT YEARS 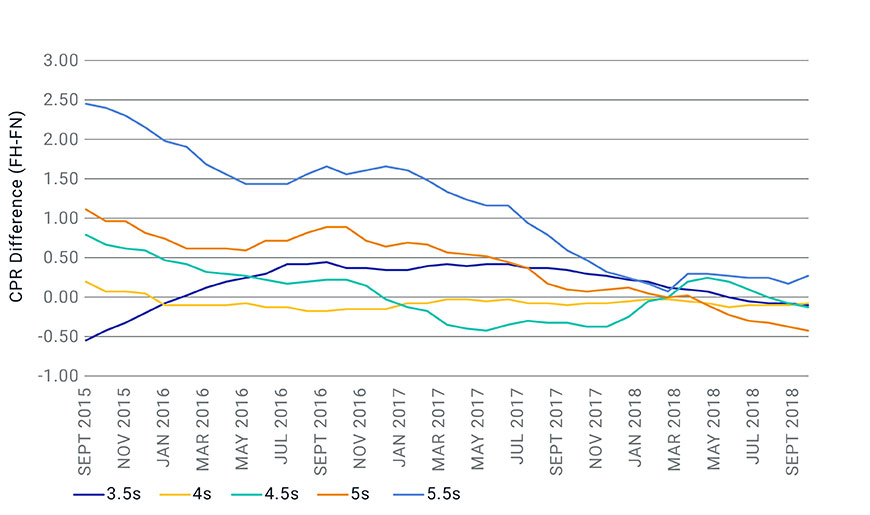 Our analysis of Fannie Mae and Freddie Mac securities data showed that a cohort-level prepayment-speed differential of 2% to 3% CPR has historically led to very substantial pricing differences between the two agencies’ securities. The two agencies are supposed to compete on mortgage-origination efficiency, especially with the imminent emergence of the digital mortgage.6 Additionally, some prepayment differences could be due to choices made by mortgage originators/servicers and CMO lockups by securitization firms — circumstances beyond the agencies’ control. Meaningful prepayment divergence is not unlikely.

It’s a very tough job for the FHFA to maintain prepayment-speed alignment, and enforce remedies if misalignment occurs, potentially jeopardizing a successful UMBS effort. Investors will face the challenge of staying ahead of the market.

Are you ready for uniform MBS (Part 1)

Are subprime auto loans at a tipping point?