Should you Hedge your Foreign Currency Exposure?

Should you Hedge your Foreign Currency Exposure?

The volatility of currency has increased in recent years as a combination of quantitative easing and currency wars fuel swings in the foreign-exchange market. 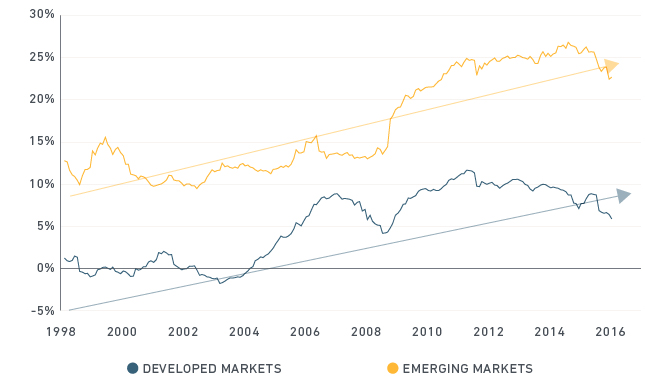 The chart above shows that the risk to a U.S. dollar-based investor from currencies in international equity exposure has increased significantly since the global financial crisis, according to the latest Barra global equity model. By contrast, the exposure to foreign currencies reduced total risk for a portfolio of developed market equities at times prior to 2004.

Many money managers disregard the volatility and leave their exposure to foreign currency unhedged. Or they apply full hedge strategies that can prove costly over time. A more dynamic hedging approach demands a framework to decide which currency to hedge, a mechanism to monitor the indicators and an ability to vary automatically the portion of each currency weight to hedge in a given period (a proportion referred to as a hedge ratio).

Which indicators to consider when selecting a hedge ratio

There is a long history of research by academics and practitioners who have studied currency hedging strategies. As part of MSCI’s research into risk factors, we have reviewed and modeled those indicators that have proved to be effective in the literature and over time.

Our indicators come from four categories: value, momentum, carry and volatility. The value indicator measures the relative purchasing power of each currency in a pair. Momentum examines currency returns for the previous six months. Carry measures the difference between two-year sovereign yields for both the foreign and home currency. Volatility compares average monthly volatility with the six-month historical average.

The ability to hedge foreign exchange risk systematically for any pair of currencies by reference to the four indicators forms the foundation of the approach to adaptive hedging that MSCI introduced recently. Though you can view each indicator individually, together they indicate whether or not to hedge and by how much. If the signal points to a possible depreciation of the foreign currency against the home currency, then a hedge may make sense.

The chart below illustrates the calculation of the hedge ratio for the Japanese yen from the perspective of a U.S.-dollar based investor.  The solid bands of color show periods when an investor should have hedged yen exposure for the respective indicators.

Indicator switches and the adaptive hedge ratio since March 2012 for the Japanese yen (U.S. dollar-based investor) 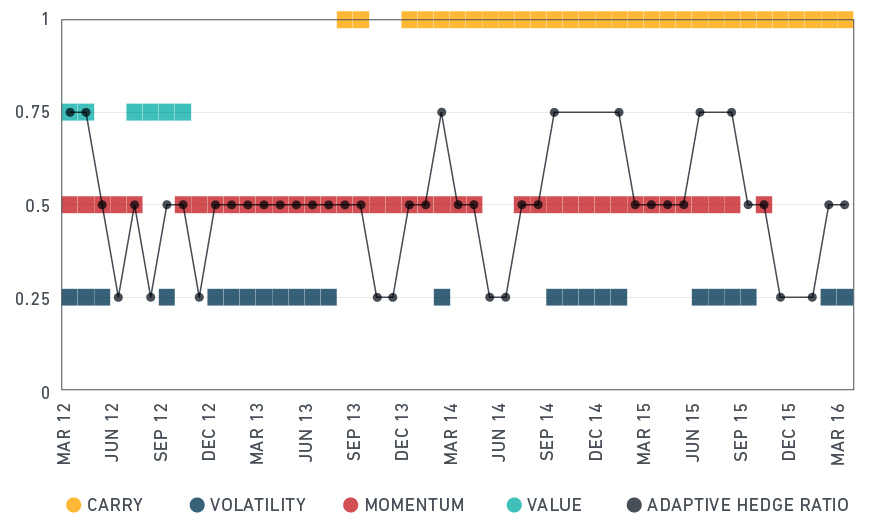 Taking the pain out of hedging decisions

If you consider each currency represented in the MSCI ACWI Index, calculate the hedge ratios and average them in proportion of the weight of the currency in the index, you get the global average hedge ratio for home-based investors. According to the formula, a U.S.-based institutional investor would need to hedge its global equity allocation by 65% on average, as of March 31.

Hedging ratio for key currencies (as of March 31)

Because the targeted hedging ratios change through time, currency hedges require active monitoring and regular adjustment in portfolios. While long-term investors may decide to leave their allocations to global equities unhedged, investors more sensitive to short-term volatility may prefer a more rules-based form of currency hedging. The adaptive hedging methodology illustrates one approach based on four factors affecting currency behavior.