California companies with no women on their boards are going to have to quickly up their diversity game. California SB 826, which took effect Jan. 1, 2019, requires that all publicly traded companies headquartered in the state have at least one female director by the end of this year – and a minimum of three by 2021 for companies with six or more total directors. Information technology companies may be particularly vulnerable.

Why is this important? Not only could non-compliant companies face financial penalties, but a growing body of research suggests connections – though not necessarily causation – between board gender diversity and financial performance1 and innovation,2 and previous studies by MSCI ESG Research have shown the connection to employee productivity.3 More importantly for these businesses, board gender diversity has become a key focus of some global asset owners, such as Japan’s Government Pension Investment Fund (GPIF),4 as well as large U.S. asset owners, including CalPERS5 and the New York City Pension Funds.6 Other investors may follow in their footsteps.

As of Nov. 27, 2018, 14% of the 364 California-headquartered constituents of the MSCI USA IMI had all male boards. The biggest hurdle for meeting the 2019 deadline may belong to Silicon Valley – nearly half of companies with all-male boards were in the information technology sector. Tech may find itself scrambling to comply with the 2021 requirement, as well – more than 100 companies will need to add female directors to comply with the law. This list includes some big names, such as Facebook (currently 2 of 9 directors are women) and Apple (2 of 8).

Despite mandates, growth in female representation on boards has slowed globally

While the California law may force some faster progress in female representation on U.S. corporate boards, it’s unclear how much it may move the needle, globally. Similar mandates have been implemented for publicly traded companies in 14 other countries ranging from Norway and France to India and Malaysia, with several additional jurisdictions having quotas for state-owned businesses. As of Oct. 16, 2018, mandatory quotas were under consideration in Canada, Brazil, South Africa and the EU. The data shows that mandates with teeth have been effective.

Even so, our most recent Women on Boards progress report found board gender-diversity growth slowing overall, despite pockets of progress. In 2015, we projected that women would represent 30% of boards globally by 2027, under average board refreshment scenarios. We now expect it to take two additional years, until 2029, before the 30% women on boards threshold is met across the MSCI ACWI Index. 30% representation is a threshold at which there is general agreement that minority group members start to have more influence and contributions. It is targeted most notably by the 30% Club.7

Projections for reaching 30% women on boards have worsened 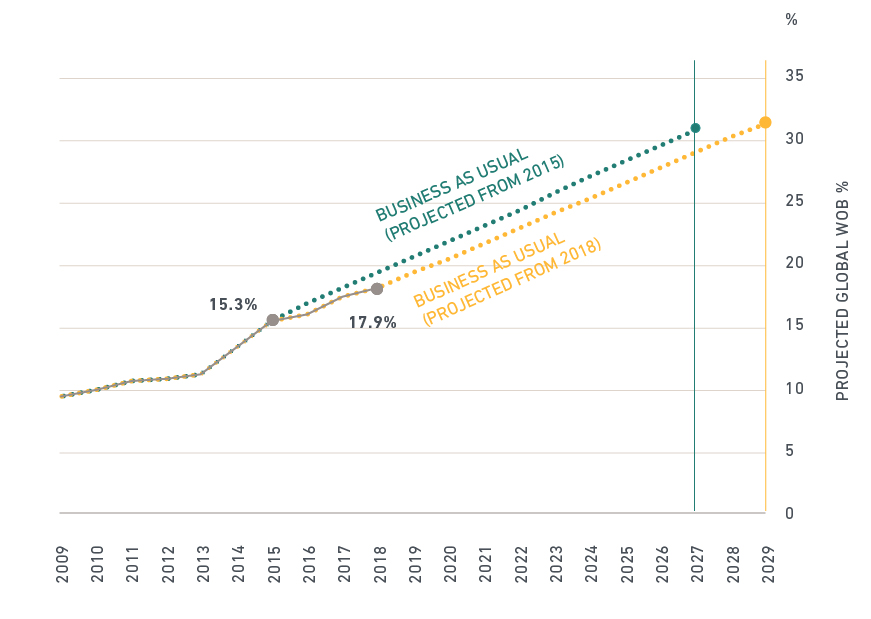 Source: MSCI ESG Research. Based on constituents of the MSCI ACWI Index.

The boys' club needs to expand or increase its members’ dues

Silicon Valley represents disruptive progress on many fronts, but they’re going to need to find top female board talent relatively quickly or risk being left behind. Non-compliance with the California law carries a penalty of USD 100,000 for the first violation and USD 300,000 for each subsequent violation. Plus, some major global investors are starting to pay closer attention to how many women have a seat at the table.

The author thanks Morgan Ellis for his contributions to this post.

5Jacobius, A. “CalPERS turns focus to board diversity in proxy voting.” Pensions&Investments, Sept. 17, 2018.

Women on Boards and the Human Capital Connection

Empowering Women in the Workplace (Japan)