The Rise and Fall of Big Tech

The Rise and Fall of Big Tech

U.S. tech giants such as Meta Platforms Inc., Amazon.com Inc., Alphabet Inc. and Microsoft Corp. have had a spectacular run over the past decade and are part of a group that has been referred to as “Big Tech.” But the tide has turned for many of these high-flyers with the Federal Reserve’s hawkish stance on monetary policy that has driven a structural shift from growth- to value-oriented stocks. The governance structure of many of these firms’ is also drawing attention.1 In this blog post, we evaluate Big Tech’s descent and discuss the efficacy of building resilient portfolios.

The U.S. equity market is down more than 15% year-to-date but there have been even more significant losses in the three Global Industry Classification Standard (GICS®)2 sectors of communication services, consumer discretionary and information technology. We highlight the outsized influence of eight Big Tech stocks (see left chart below) that peaked towards the end of 2021 and has since been on the decline, each having lost more than USD 125 billion in market capitalization so far in 2022. These stocks were also instrumental in dragging down their respective sectors, with Apple Inc. being the only exception, as it performed in line with the information technology sector (right chart below) and was resilient compared to its Big Tech peers. Other sectors have fared relatively well this year with many posting returns higher than the market. 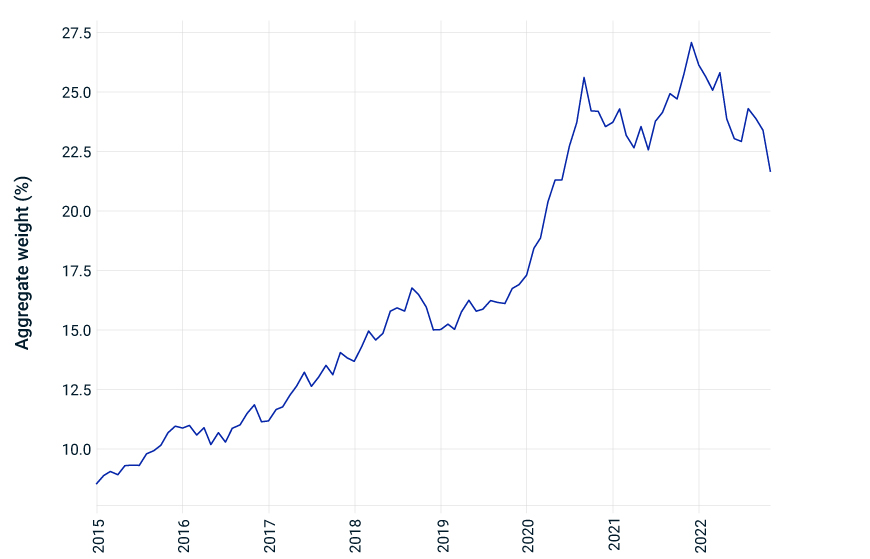 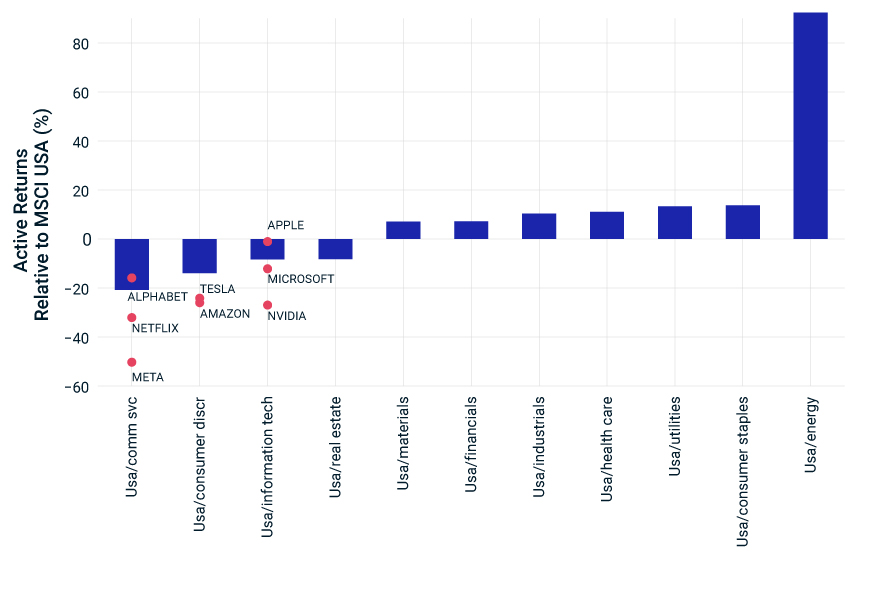 With events such as the Ukraine war, fears of stagflation and a possible recession, investors have continued to avoid high-risk growth names in favor of low-risk and value-oriented stocks. The sectors that have the widest underperformance also had the highest exposure to growth or low exposure to value at the end of 2021. Many of the Big Tech names that were significantly exposed to growth at this point (as shown below), such as Tesla Inc., Netflix Inc., Amazon and NVIDIA Corp., had earnings’ misses and were heavily penalized in the growth-to-value rotation as investors opted for safety. 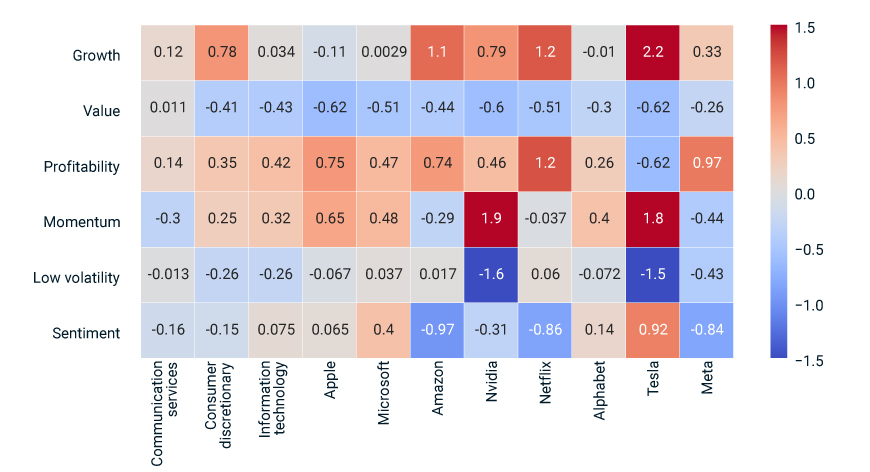 Exposures in z-scores from the MSCI US Equity Factor Trading Model. As of Dec. 31, 2021.

Even with the selloff, the value and growth properties of these individual stocks have not altered significantly, with only Meta joining the value camp. However, exposure to more dynamic factors like momentum has dramatically shifted. Interestingly, sentiment, which is largely derived from analysts’ views, has improved for some companies including Apple.

We believe that effective corporate governance may help companies respond to business challenges. Accordingly, we reviewed the board practices of these eight Big Tech firms relative to the 100 largest constituents by market cap of the MSCI USA Index. As a point of reference, six of the Big Tech were classified as founder-led firms.3 This classification was uncommon among the MSCI USA Index peer group, which included only 13 other founder-led firms.

When examining board independence from management,4 five of the Big Tech founder-led firms lagged the average of the peer group, with just NVIDIA exceeding the peer average for board independence. This is significant, because boards with a low percentage of independent directors may find it difficult to provide effective challenge to powerful founders. Additionally, Alphabet and Meta were the only Big Tech firms with multiple equity share classes with unequal voting rights.5 This was exceedingly rare among the top 100 peer group, with only three additional issuers making use of it. If founders hold shares with additional voting rights, this might further increase their influence and potentially limit the role of other shareholders in the company’s decision-making process. Apple and Microsoft stand out with relatively independent board composition compared to the peer set, with the two firms experiencing the lowest drawdown within the Big Tech group.

Board independence and equity structure 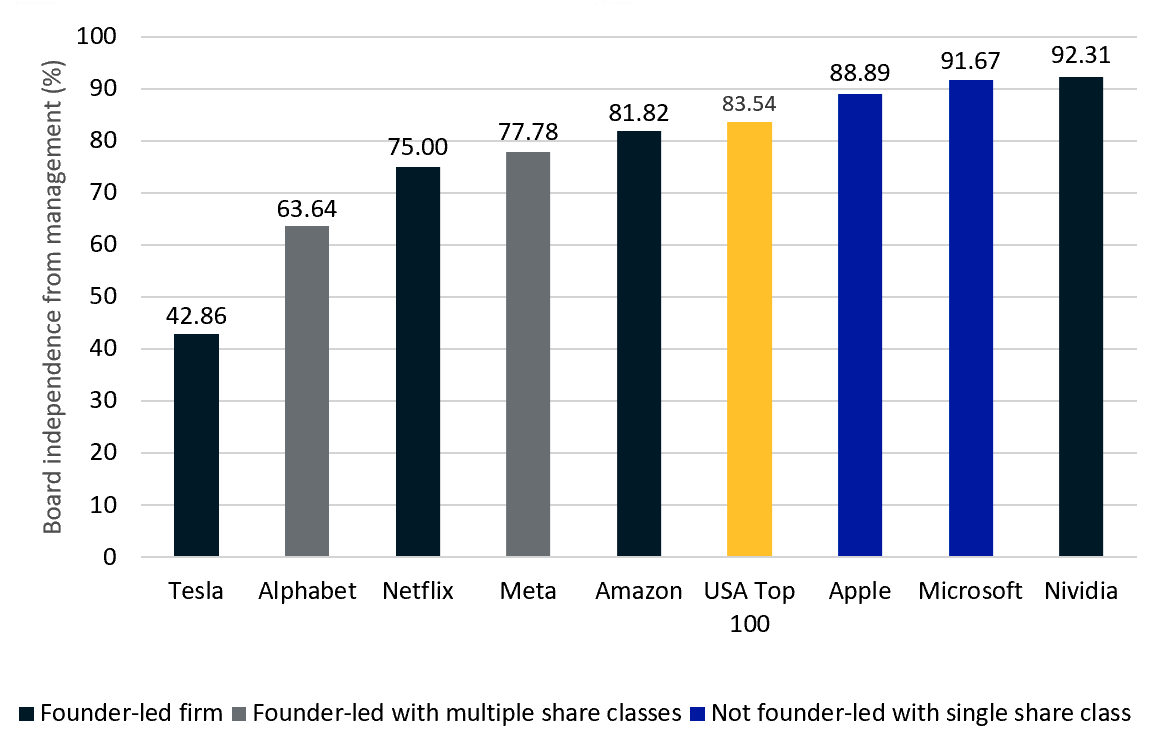 Growth still has an important role in factor allocations even though it may be difficult for investors to predict when the growth trade might return and if that will revive Big Tech. Value, momentum, yield and low volatility have had unusually higher correlations throughout 2022 compared to the previous year. This has the potential to heighten the risk of a simultaneous drawdown across all these factors if macroeconomic conditions were to change. In contrast, growth, along with other factors such as quality and low size, has lower correlations with most factors and could be the foundation for more diversified and resilient portfolios. Since timing a trade isn’t always easy, it may be constructive for investors to consider a diversified group of factors when building portfolios for the long term.

While Big Tech has seen better days, not all Big Tech firms have experienced the same trajectory. Some have been more resilient and have a sharper governance focus. And despite the recent run of relative underperformance, Big Tech firms remain an influential component of the U.S. equity market.

The authors would like to thank Jonathan Ponder for his contribution to this blog.

3An issuer is considered a founder-led firm when a founder plays an active role in the company, such as serving as CEO, chair, director, or a current shareholder.

4A director is considered independent from management when they are not a current or past executive or employee of the issuer and have no material links to the controlling owner or executive officers, such as providing professional services or interlocks on outside boards.

5Multiple equity classes with unequal voting rights are considered a form of control skew, whereby voting power is misaligned with economic interest, which may be used to maintain control by an issuer’s dominant shareholder.

Can Style Momentum Be Optimized?

Do Birds of a Feather Flock Together?