Markets fear that a defeat of constitutional reforms proposed in Italy’s Dec. 4 referendum would end the government of Prime Minister Matteo Renzi, who has promised to resign if they fail. The reforms aim to make it easier for governments to implement their programs. A failed referendum could produce political instability, which could complicate efforts to recapitalize the country’s struggling banks, impede the government’s ability to reform the economy for the long term and increase risk across Europe, already engulfed by a banking crisis.

Using MSCI’s stress-testing capabilities, we have evaluated two scenarios that could unfold following such an outcome, to help investors quantify and manage the possible impact on their portfolios. Below we summarize each scenario.

Markets fear that rejection of reforms in Italy will thwart the government’s efforts to secure a rescue plan for Italian banks, which are weighed down by non-performing loans. Banks default en masse, triggering a severe economic recession in the country. Though the crisis spreads to the rest of Europe, with an acute impact on countries at Europe’s periphery, investors perceive that governments and the European Central Bank have managed to limit the risk of further instability.

Equities in Italy lose nearly a third of their value over ensuing weeks, while stocks in developed markets fall 7.4% (see shocks below). The VIX jumps by about 35%. The crisis pushes Italy and countries at the periphery of Europe closer to default, as yields on Italy’s six-month and 10-year government bonds increase 240 basis points and 110 bps, respectively. 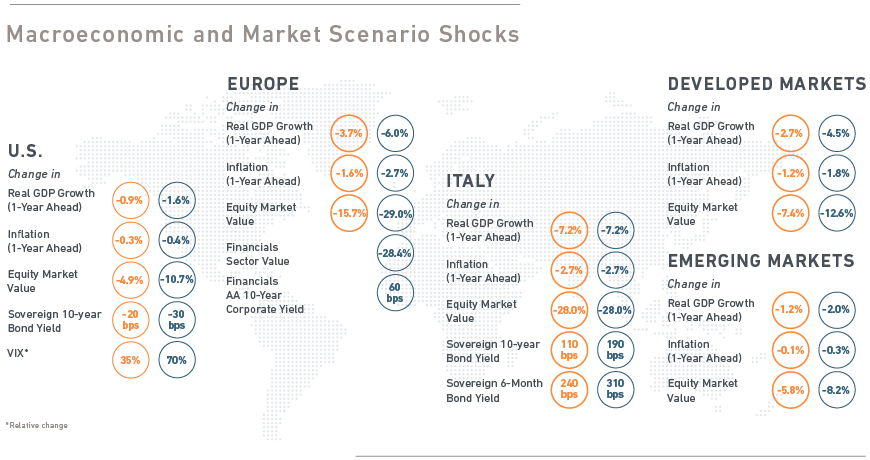 Cyclical equity sectors could lose 9.2%. Among equity factors tied to economic growth, value and small cap could lose 13.7% and 12.8%, respectively. Defensive sectors and factors such as quality and minimum volatility would lose 7% and 6%, respectively.

Fixed-income portfolios with longer durations and a tilt away from peripheral Europe and high yield do better, falling about 2%.

A diversified global multi-asset-class portfolio could lose as much as 5.2% of its value. Despite its tilt toward global bonds, a risk-parity portfolio could still lose 4.8%. 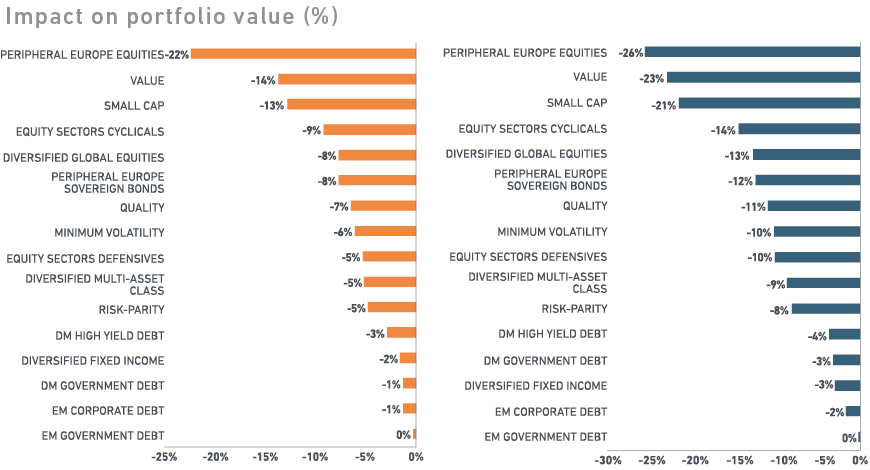 Scenario 2: A European banking crisis that causes investors to question the future of the euro and the EU

Investors worry that banks burdened by nonperforming loans will require a combination of bailouts and bail-ins, in which borrowers and their creditors both take losses. Investors lose confidence in the ability of the ECB and eurozone leaders to end the crisis, which raises the risk of members of the currency union defaulting on government debt.

The banking crisis becomes systemic and spreads widely, with the most acute impact falling on an already fragile European banking sector. Prospects for a severe recession and an increase in political instability intensify questions about the future of both the EU and the euro.

The VIX jumps by 70%, reflecting a significant uptick in risk. Equity markets fall as much as 12.6% across developed markets. Financials in Europe lose nearly 30% their value. As markets perceive greater risks of sovereign default, sovereign-bond yields rise across maturities and across Europe except for Germany. Italy’s 6-month and 10-year bond yields increase 310 bps and 190 bps, respectively.

Cyclical equity sectors and factors could lose 14.4%. Among equity factors tied to economic growth, value and small cap could lose 22.9% and 21.5%, respectively, while defensive sectors and factors such as minimum volatility and quality likely could outperform the market. A global diversified fixed-income portfolio could experience losses of about 3%.