Could populist policies lead to long-term problems for Europe’s third-largest economy? We examine two hypothetical scenarios: 1) an Italian debt crisis (mild scenario) and 2) Italy leaving the eurozone (severe scenario). While global markets in general could suffer under both scenarios, our stress test results suggest that an Italian departure from the eurozone, dubbed “Quitaly,” could result in EU equities plunging as much as 30%. In Italy, we could see equities drop 50%, whereas Italian sovereign bond yields could rise as much as 480 basis points (bps).

At the end of May, political deadlock in Italy led to significant volatility in both Italian equity and government bond prices, as well as the broader market. After a few turbulent days, a government was formed and volatility lessened, though equity prices reset at lower levels and sovereign bond yields remained high, as we can see in the exhibit below. But a longer-term threat remains from further political disruption. 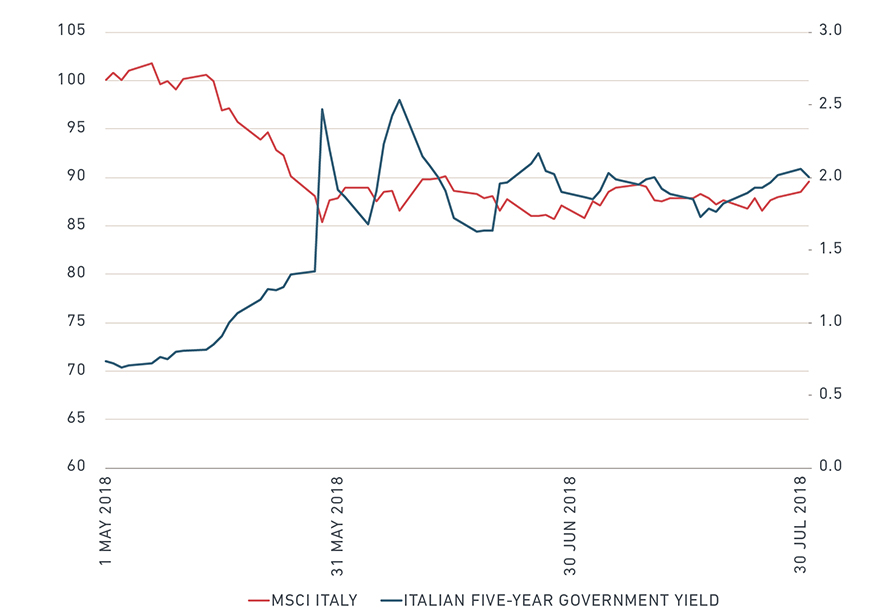 The current market concern is that the ruling parties in Italy’s coalition will pursue populist economic policies that could potentially hurt the Italian economy. Market expectations seem to be based, in part, on the ideas that any increase in government spending on social programs may directly contribute to higher fiscal deficits and that a reversal of job market reforms established by a previous government could lead to reduced competitiveness and an economic slowdown. Furthermore, the increased risk premium for Italian government debt – presently reflected in higher current sovereign yields – could increase borrowing costs and put a strain on an already struggling Italian banking sector.

In this scenario, we assume a slowdown in growth of the Italian economy of -3% and a rise in inflation of +3%.1 Based on the MSCI Macroeconomic Risk Model analysis, markets would factor in such macroeconomic expectations with a significant 26% decline in Italian equity prices.

This scenario builds on the first, with the same macroeconomic root causes driving the crisis. However, under this scenario, unsustainable debts lead Italy to exit the eurozone. Such an event could have a major impact on the eurozone region and the global financial system more widely, and put further pressure on the sustainability of the European Union.

Under this scenario we assume Italian growth and inflation shocks of -6.3% and +3%, respectively. Such a sharp change could cause Italian stocks to plunge 50% in the model, while Italian sovereign bond yields could rise 480 bps, based on the MSCI Macroeconomic Risk Model analysis.2

The following exhibit shows the primary market risk factors driving the stress test results.3 Shock magnitudes are based on maximum two-week drawdowns during the 2011 European sovereign debt crisis, whereby we scale up the 2011 shock magnitudes based on the macro-based equity market impact.

Italian equities and bonds would suffer under two scenarios

Contagion to the Periphery and A Flight-to-Quality

The stress test results suggest that renewed worries most likely would spread beyond Italy’s borders. For government bonds, we see a strong contagion to European peripheral countries such as Spain, Ireland and Portugal. At the same time, a flight-to-quality could increase bond prices in safe havens, such as the European core countries of Germany, France and the U.K., as well as in the U.S.

Italy’s problems could spill over to other countries

For equity markets, all countries could suffer. The magnitude of any potential losses would be partially driven by other countries’ proximity to Italy, with peripheral countries likely to be the most negatively affected. However, the situation for equities is slightly different than for sovereign bonds, as country-specific sector allocations could skew the results. For example, the Austrian equity market could suffer more than some others because of its large exposure to the financial sector, which is impacted more severely under the stress test.4

In short, although the short-term political deadlock in Italy has been resolved, investors may be wary about the long-term outlook, amid concerns that populist policies could lead to troubles ahead for global equity and bond markets.


The author thanks Carlo Acerbi for his contribution to this post.

2 The impact to the Italian markets is significant compared to the muted impact to U.K. stocks and bonds since the Brexit referendum was approved, as Italy is already under pressure even without such an exit. Furthermore, Quitaly would entail an exit from the monetary union, as opposed to the European Union.

3 These shocks are propagated to a portfolio using a predictive stress test in RiskManager based on 2011-2012 correlations. Under the Quitaly scenario, MSCI EU and the five-year Spanish government yield are used as additional core factors in the predictive stress test. Import files are available for BarraOne. A RiskManager user guide and implementation files will be available shortly.

4 Note that the market correction in May seemed to have priced in the stress test partially, with Italian equities and government bond yields being at new equilibrium levels as shown in the first exhibit.