This is an update to a blog which was first published on December 11, 2018.

Financial markets were edgy about prospects for the U.K.’s Brexit deal with the European Union at the end of last year. Even though markets did not react strongly to the rejection of the U.K.  government’s Brexit deal by the U.K parliament, a “No deal” scenario is still a possible outcome. A “No deal” outcome and a potentially difficult exit from the EU could have significant ramifications for the U.K. economy and financial markets, as two recent Bank of England (BoE) Brexit scenarios suggested.1  Our stress test analysis using MSCI’s RiskManager suggests that if no deal is agreed upon, U.K. and European stocks could fall by nearly 25% and 10% respectively in the “Disorderly Brexit” scenario. In contrast, a “Disruptive Brexit” – with less severe assumptions – could lead to losses about a third as large.

How has the U.K. fared since the referendum?

Below, we examine how key economic and market indicators have fared since the Brexit referendum in June 2016. Quarterly year-on-year U.K. gross domestic product (GDP) growth rose at first, but has been declining since mid-2017. Additionally, after a sharp initial reaction to the outcome of the referendum, the U.K. equity market and, to a lesser extent, the pound, recovered, but started to slide again at the beginning of this year. All told, since the referendum, the pound has lost 7% relative to a trade-weighted basket of currencies, the U.K. long-term yield is slightly lower than it was in June 2016 and U.K. equities have risen by 10%, in GBP terms, in contrast to the MSCI World index which gained twice as much in local currency terms. The drop in the pound and underperformance of the U.K. equity market suggests that markets have already partially priced in a Brexit.

However, based on the scenarios designed by the Bank of England, a large impact is still to be expected if no deal is struck. The exhibit below compares the main assumptions of the MSCI and BoE scenarios; the BoE scenarios are relative to today – i.e., net of what has been priced in already. 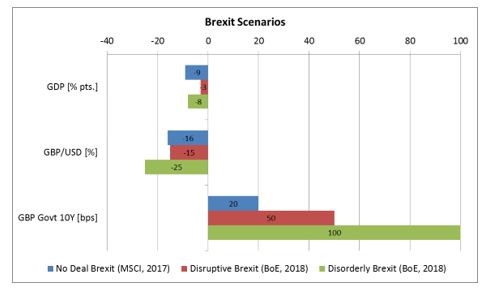 MSCI’s “No Deal” Brexit scenario, designed in 2017, assumed U.K. GDP growth would decrease by 9%, the pound weaken 16% against the U.S. dollar and the euro and the U.K. 10-year sovereign yield would increase by 20 basis points. For this latest analysis, we slightly modified our original scenario to bring it in line with the main assumptions of the two BoE scenarios,3 and propagated these shocks to financial market risk factors.4 As the exhibit below shows, equity markets lose across the board under all three scenarios, with the worst-case 23% drop in the United Kingdom twice as large as in other countries.5 The U.K. has underperformed other regions in terms of GDP growth, as well as in the equity and currency markets. However, the real impact – if there is “no deal” – has yet to materialize. Various scenarios we tested suggest a significant slowdown in the U.K. economy and large losses in its equity markets and exchange rate. Investors should continue to watch closely while preparing themselves for the worst.

1 The Bank of England created two Brexit scenarios: a “Disruptive” and a “Disorderly” Brexit.

5We proxy the equity portfolio with the MSCI World Index.

Breaking up is hard to do: Brexit and institutional portfolios