Despite uncertainty around whether sanctions will bar creditors from receiving payments, Russia paid USD 117 million of interest due for two Russian hard-currency bonds, on March 16. Additionally, spreads of credit-default swaps (CDS) on Russian sovereign debt — the cost of insuring against default — have also recovered. After peaking during the week of March 11, CDS-implied default probabilities have steadily declined, from a high near 80% to a more moderate but still substantial 50% on the 1-year horizon.

A similar trend emerged in the bond market. Even though trading in Russian debt is suspended on most exchanges, reported bond prices indicated a bounce back. While reported bond prices were no higher than 25% of par value two weeks ago, many Russian bonds rallied to levels above 40, and some as high as 70 for bonds close to maturity, as of March 21. The uptick was muted more for so-called fallback currency bonds, which contain a special clause that allows the issuer to make payments in rubles as an alternative currency. These bonds were priced below 20. We note that there is a high level of uncertainty around the prices observed in this market.

On the other hand …

Historically, such developments have indicated market optimism around the issuer’s ability to service its debt. The Russian Federation, however, still has some major hurdles to clear. Last week’s payments make up a small portion of the USD 2.6 billion of obligations due in the coming weeks. Russia can make the next payment of USD 102 million, due on March 28, in rubles as a fallback currency, without triggering a credit event for CDS protection. Following that, the largest portion of the upcoming payments is the USD 2 billion in principal due on a bond maturing on April 4.

Probability of default within 1Y, inferred from CDS spreads 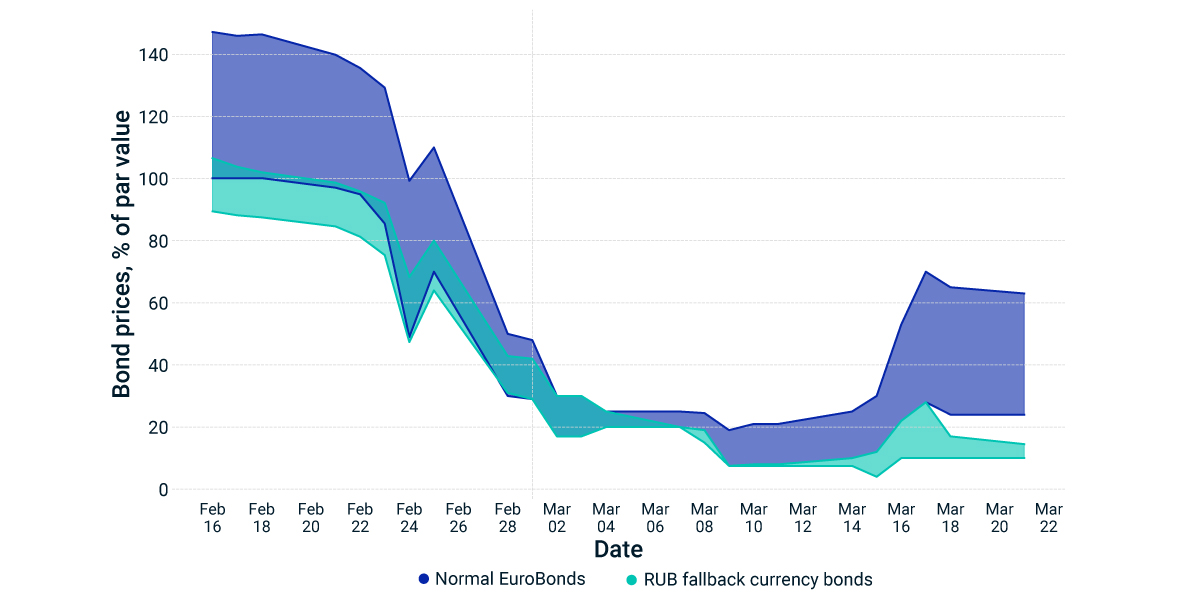 Investment-grade energy-company bonds, on the other hand, have not benefited as much from this tailwind, as the credit-spread expansion in the exhibit below shows.